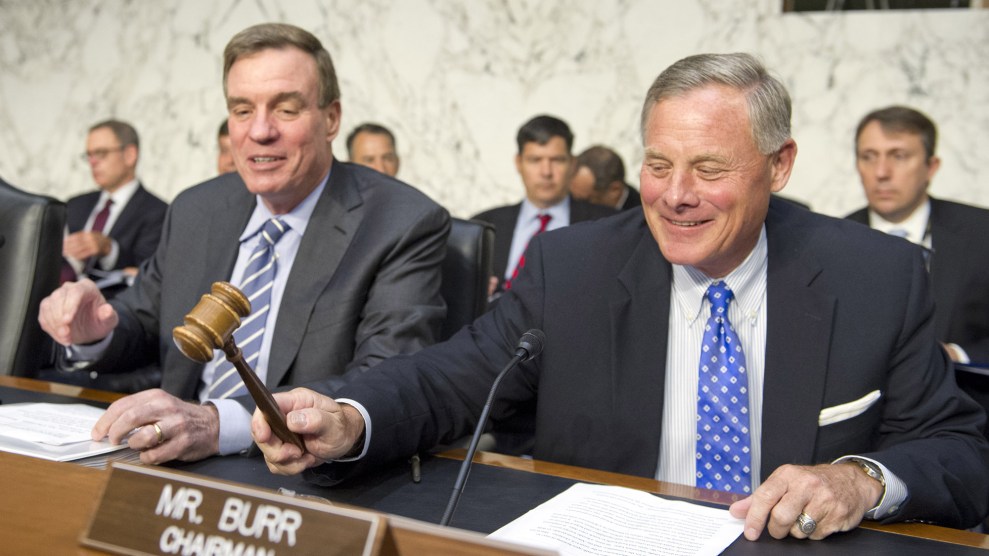 Sen. Richard Burr (R-N.C.), the chairman of the Senate Intelligence Committee, is walking a thin line when it comes to discussing his panel’s investigation of Russian meddling in the 2016 election. At a news conference Wednesday, Burr described the committee’s probe as thorough and nonpartisan, referred to Moscow’s assault on the election as serious, and urged a government-wide effort to prevent similar interference in upcoming elections. But Burr refused to criticize President Donald Trump for calling the Trump-Russia scandal a “hoax.” He declined to acknowledge the Russian effort may have had an impact on the election’s outcome. And he wouldn’t back up the intelligence community’s assessment that the Kremlin’s covert operation was partly designed to help Trump win.

Burr said that there is a “general consensus” among intelligence committee members and staff “that we trust the conclusions” of a January 6, 2017, intelligence community assessment that Russian President Vladimir Putin approved the effort by his government to interfere the American election, including the hacking and release of Democrats’ emails. That report also noted that US intelligence agencies “have high confidence” that “Putin and the Russian Government developed a clear preference for President-elect Trump” and acted to help him win the election.

How can Burr trust the intelligence community findings but not accept the key conclusion that the Russians favored Trump?

Asked about that part of the assessment, Burr couldn’t bring himself to voice support for the notion the leader of his party was the Kremlin’s choice. “We have not come to any determination on collusion or Russia’s preference,” Burr said. Burr argued that recently disclosed activity on social media by Russia-based accounts during the campaign was “indiscriminate. “The overall theme of their involvement in the US election was to create chaos at every level,” he insisted.

For Burr, it’s apparently complicated. How can he trust the intelligence community findings but not accept the key conclusion that the Russians favored Trump? The committee, Burr told reporters, has “confidence” in the assessment, “but we’re not willing to close the issue [of Russia aiming to help Trump].”

Burr and Sen. Mark Warner (D-Va.) the vice chairman of the committee, said Russian efforts to to influence US elections continue. The senators called for what Warner described as a “whole-of-government approach” to protecting the electoral system. But Burr dodged questions about how the Trump administration can thwart Russian interference in upcoming elections, if Trump refuses to accept the fact that Russia interfered in the last one.

“We’re not trying to look back,” he said when pressed on Trump’s reluctance to treat Russian cyberattacks as a significant threat. Burr argued that the Department of Homeland Security has actually taken a more aggressive posture against election meddling under Trump. “It’s his direction,” Burr said. “We’re pleased with the progress they’re making.” (But Trump has still not appointed key officials at the Department of Homeland Security, including a new DHS secretary and the head of the agency responsible for preventing cyber-assaults.)

Burr’s zig-zagging appears to reflect the pressure he faces as a Republican heading an investigation into Russian interference under a Republican president who calls the matter “fake news.” GOP activists echo Trump. Many, growing restive over the multiple probes hanging over Trump’s presidency, voice frustration that Burr has not already wrapped up his probe. Even as Burr was working hard to avoid any appearance of criticizing Trump on Wednesday, he also told reporters that his inquiry has actually expanded and that his previously stated hope of ending the investigation this year was now unrealistic. Those statements drew quick criticism from the right. “How Long Will the Russia Investigation Drag On?” the conservative Daily Caller asked Wednesday.

“The issue of collusion is still open.”

Burr did reveal Wednesday that the committee has put to rest aspects of its probe. He said the panel’s investigation into Trump’s firing of former FBI Director James Comey—an action Trump appeared to partly attribute to the FBI’s Russia investigation—“has reached a logical end.” Special Counsel Robert Mueller’s office is investigating whether Trump’s dismissal of Comey amounted to obstruction of justice. The Senate Judiciary Committee is also investigating the firing.

Burr also seemed to suggest that the committee has found nothing amiss in an April 27 meeting at the Mayflower Hotel between Trump campaign associates and former Russian ambassador Sergey Kislyak. The meeting was among the Russian contacts that Attorney General Jeff Sessions, then a senator supporting Trump, omitted when he told the Senate Judiciary Committee that he had not communicated with Russians during the campaign. Burr said that seven people involved in the meeting had given consistent accounts to the panel. He did not, though, provide details of those accounts.

Burr similarly suggested that the committee’s investigation has found that Trump campaign aides acted appropriately when they weakened a GOP platform plank related to Russia’s incursion into Ukraine. This suspicious move raised the prospect that the Trump campaign was doing Putin a favor. The changes, Burr said, were intended to position the United States “as a strong ally of Ukraine, but also leave the door open to better relations with Russia.” But on this matter, he also did not offer any specifics.

Burr asserted that the committee was confident that Russian meddling, including efforts to access the voting systems in at least 21 states, had not affected actual vote tallies. “The outcome of the election, based upon the vote count—they did not in any way, shape, or form alter that,” he said. Burr’s statement was limited to direct changes to vote tallies. Asked if he could say that the Russian effort—which included the hacking of Democratic targets, the release of stolen materials, Facebook ads, and cyber-intrusions into state election systems—definitively did not influence the 2016 campaign, Burr avoided the query and instead said the committee was investigating whether collusion occurred with either presidential campaign. “The issue of collusion is still open,” Burr remarked. (This is one of the aspects of the Trump-Russia scandal the president has repeatedly called a “hoax.”)

Warner, who mostly avoided disagreement with his colleague on Wednesday, offered a different take. “I fear sometimes that if you add up all [Russia’s] spending, there was a decent rate of return,” he said.

Asked to explain this remark after the press conference, Warner told Mother Jones, “For the cost of one nuke, the Russians can affect elections in the United States, the Netherlands, France, and other countries. This is cheap stuff. It can be cheaper than a tank. And I’m concerned. It’s such an asymmetric situation.”

Burr said he was aiming to finish up the investigation by the end of the year and perhaps publish findings by the following spring. But he cautioned reporters not to hold the committee to this schedule, noting that its investigators have found more, rather than fewer, matters to probe as the inquiry has moved forward.