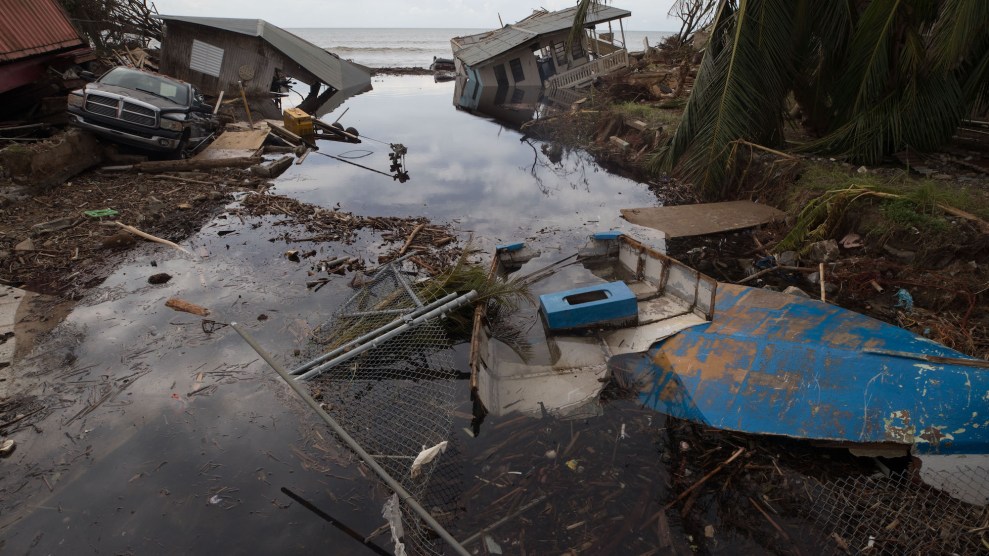 The former Federal Emergency Management Agency chief has some advice for the Trump administration after back-to-back hurricanes in the past month: You have to look at climate change science if you want smarter disaster relief.

Drawing on eight years of experience leading FEMA under President Barack Obama, Craig Fugate warned on Tuesday that flood-prone areas can’t simply “rebuild to the past” using historical data on 100-year flood risk. Instead, he said at an event at the liberal Center for American Progress, the country needs to “build to future risk.”

The situation is especially critical now that Congress will be appropriating billions in aid to Texas, Florida, Puerto Rico, and the Virgin Islands. Climate change is helping make these disasters bigger and nastier, but Fugate said they are only natural hazards that “become natural disasters when we’re pricing risk too low. We’re putting vulnerable populations and your tax dollars at risk.”

Fugate refused to discuss President Donald Trump’s or FEMA’s response in Puerto Rico in his remarks or in conversations with the press on Tuesday, but his discussion of the Obama administration’s response to Superstorm Sandy in 2013 presented a stark contrast. He recounted how Obama gave him a specific charge after Sandy, saying that “we need to start talking about climate adaptation” to better cope with the new risks posed by rising global temperatures.

EPA Administrator Scott Pruitt had the opposite response after the hurricanes, saying a discussion of “a cause and effect isn’t helping.” When Trump was asked about climate change after Harvey, he said only, “We’ve had bigger storms.”

Just 10 days before Harvey’s record rainfall in Houston, Trump reversed Obama’s 2015 executive order to hold federal infrastructure spending to higher elevation standards in floodplains. Building even a foot or two above the existing standards saves money, and potentially lives, in the long-term, Fugate said. “Putting more money in the front end, we save the taxpayer in the long run,” he said. He also criticized the federal flood insurance program for pricing risk so low that it encourages overdevelopment in vulnerable areas, shifting the losses from flooding to the federal taxpayer.

Speaking to reporters the event, Fugate gave an example of why climate adaptation is necessary. If, after a natural disaster, you rebuild a fire station at the same elevation, to the same building codes, then you risk losing critical emergency resources when they’re needed most. But if you build it to withstand the future risk we know is coming, then the fire station stays intact to help residents through the disaster.

“In many cases we’re doing things that just don’t make sense…and you’re saying you’re building back better,” Fugate said, adding, “We have to rebuild [Puerto Rico] back for a Maria.”

Mother Jones‘ AJ Vicens has been reporting on the ground from Puerto Rico; read his story about how FEMA supplies and assistance have been slow to reach some communities, including one just 45 minutes from the capital, San Juan.