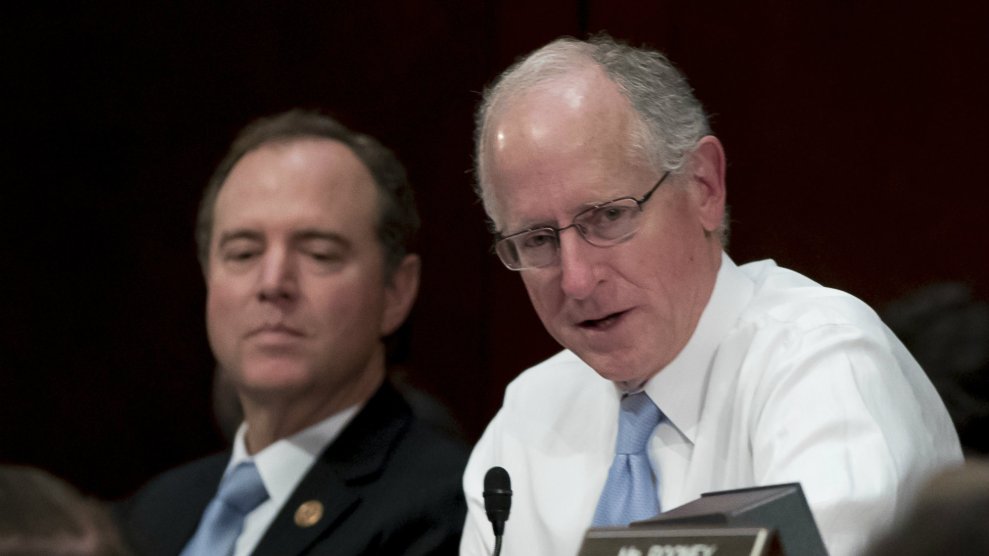 With the Trump-Russia scandal expanding—it now includes new revelations regarding Moscow’s use of social media in the United States to influence the 2016 campaign—Capitol Hill sources are questioning whether the House intelligence committee has devoted sufficient resources to conduct a thorough and comprehensive investigation of this wide-ranging matter.

The committee’s to-do list includes a long list of subjects to probe: the Russian intelligence hack-and-dump operations targeting Democrats and the Clinton campaign, the Russian effort to penetrate state election systems, the pre- and post-election interactions and ties between Trump associates and Russians, the financial links between Donald Trump and Russian entities, the memos compiled by former British intelligence officer Christopher David Steele, the firing of FBI director Jim Comey, the Obama administration’s response to the Russian assault, the role of WikiLeaks and other possible cut-outs in Moscow’s information warfare against the United States, and more. Yet according to committee sources, only a modest number of staffers have been assigned the task of investigating all of this. These sources note that the Republicans who control the committee have only put four or five full-time staffers on the case. The Democrats, who are granted a much smaller share of the committee’s resources because they are in the minority, have fewer people working full-time on the investigation.

“[Republicans] just want to rush through this thing without doing the job right,” one Democratic intelligence committee source says.

A spokeswoman for Rep. Michael Conaway (R-Texas), who is overseeing the committee’s Russia investigation in the wake of the quasi-recusal of Rep. Devin Nunes (R-Calif.), the chairman of the panel, declined to say how many staffers have been delegated to the Russia inquiry by the Republican side of the committee. “Democrats have tasked three staffers full-time, and an additional four staffers part-time depending on the issue at hand,” a Democratic committee source says. “Three-fourths of our staff is working on the Russia probe, in addition to our important day jobs of performing rigorous oversight of the intelligence community.” This source adds, “Because we are in the minority, we naturally have at least one third less staff to begin with than the majority, but which we have sought to augment through greater member participation in reviewing documents and participating in interviews.” That means House Democratic members are participating in the nitty gritty of the probe more than they usually would.

Democratic members of the committee have complained that the panel is woefully understaffed to mount a thorough investigation of the many aspects of the scandal. By comparison, special counsel Robert Mueller has hired 16 lawyers for this investigation, according to a Mueller spokesman. This group includes well-known experts in corporate crime, money laundering, organized crime, and corruption cases. Mueller also has many FBI agents digging away. (His office won’t disclose how many bureau gumshoes are working for Mueller.) Asked how many staffers are handling the Senate intelligence committee’s Russia probe, a spokeswoman for Sen. Richard Burr (R-N.C.), the chairman of the committee, did not respond. The special House committee on Benghazi set up by Republicans had 46 staffers and eight interns.

From the start, the House intelligence committee’s Russia probe has been marred by politics and in-fighting. In April, Nunes handed over responsibility for the inquiry to Conaway and Rep. Trey Gowdy (R-S.C.) after he clumsily tried to bolster Trump’s false claim that he had been wiretapped by President Barack Obama during the 2016 campaign. But Nunes still keeps intervening in the investigation. This summer, he sent two committee staffers to London to try to interview Steele. According to Democratic committee sources, Conaway was not informed of this trip before it happened. Earlier this month, Nunes subpoenaed Fusion GPS, the firm that hired Steele to research connections between Trump and Russia, without informing the Democrats. This move has created the appearance that Nunes is mounting his own parallel investigation to boost the Republican narrative that the Steele memos were orchestrated by Democrats (or even the Russians) to discredit Trump.

House intelligence committee Democrats, who asked not to be identified, also accuse the Republicans of trying to rush the investigation and provide cover for some of the people being interviewed. They maintain that when Jared Kushner, Trump’s son-in-law and a top White House adviser, was questioned privately by the committee, Gowdy encouraged Kushner to leave when the 90-minutes allotted for the session had expired, even though Kushner had earlier indicated he was willing to remain longer. (Asked about this, a Gowdy spokeswoman replied, “I would highly recommend you ask your sources to produce the interview transcript which will clearly show their narrative is false.”) And committee Democrats say that the Republicans were eager to interview Paul Manafort, Trump’s campaign chief who had ties to a Russian oligarch and a former Ukrainian president allied with Vladimir Putin, before Manafort had turned over all the documents requested by the committee. (Manafort has yet to testify before the committee.) “They just want to rush through this thing without doing the job right,” one Democratic committee source says. And a source familiar with the committee’s operations notes, “Both sides are resource-challenged. But for the majority, it’s mostly an interest challenge that holds back the progress.”

Earlier this month, Burr held a press conference to provide a progress report on his panel’s investigation of the Trump-Russia scandal. Though he refused to concede that Russia had intervened in the 2016 election to help Trump—a conclusion the intelligence community unanimously supports—he did try to depict his committee as mounting a thorough and serious investigation, citing the number of witnesses interviewed and pages of documents reviewed. There was no telling from Burr’s data how deep or wide the committee was truly going. Burr said he hoped that the committee could finish its investigative work by the end of the year and then release a report sometime the following spring. Sen. Ron Wyden (D-Ore.), a member of the committee, disagreed with Burr and told Mother Jones that the committee still had “a long way to go.”

But at least on the surface, the Senate investigation comes across as a smoothly running probe. The House investigation has been racked with trouble from the get-go. Democrats on the committee insist they are trying mightily to conduct a serious and effective inquiry. But the internal conflicts and resource allotment on the Republican side do not inspire confidence. The committee is charged with investigating a critical matter—how a foreign adversary attacked American democracy and ties between a US political campaign and that foe—yet it may turn out that the investigation itself warrants its own investigation.