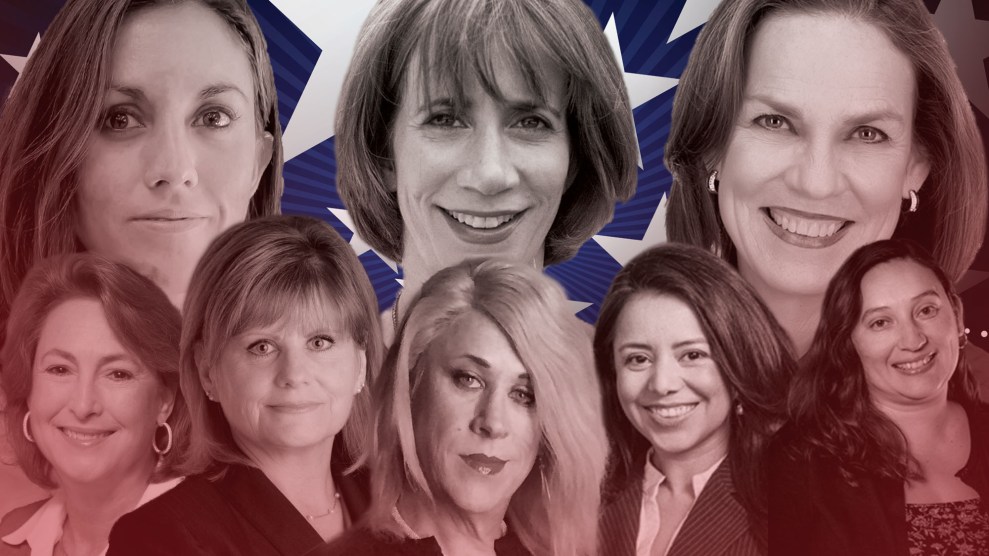 The Lone Star state has a long tradition of strong, progressive women, from the late Democratic Gov. Ann Richards, who paved the way for a new generation of female political candidates, to former state Sen. Wendy Davis, whose 11-hour filibuster of an anti­-abortion bill catapulted her to national attention. Lately, a new crew of activists, organizers, and officeholders has emerged to battle the Trump agenda and restore the state to its once-blue glory. Here are some rising stars.

The Travis County sheriff has clashed with the Trump administration and Texas Gov. Greg Abbott, declaring that her department would not co­­operate with federal requests to detain people based on their immigration status. Abbott retaliated by yanking $1.5 million in criminal justice grants to the county, and the Legislature later passed SB 4, the state’s sanctuary cities ban. Facing a personal mis­demeanor charge and a fine to the county of up to $25,500 per violation, Hernandez says she will comply with the law. She and five of Texas’ six largest cities sued the state to prevent the new law from being enforced. On August 30, a federal judge ruled in favor of Hernandez and the other plaintiffs, temporarily blocking the bill two days before its planned implementation.

After un-seating an incumbent Republican state representative last fall, the Dallas Democrat has emerged as one of SB 4’s most vocal opponents. She staged a four-day hunger strike in opposition to the bill. One of the law’s authors joked about postponing the vote to “see how hungry she gets.” Possibly damaging to her political aspirations: In June, she was arrested for driving while intoxicated.

The newly elected district attorney of Harris County—home to Houston—has tackled criminal justice reform in one of America’s most populous jurisdictions. One of her first actions: allowing people caught with small amounts of marijuana to take a drug education class and avoid arrest. She has also been a vocal critic of the county’s bail system, arguing it keeps poor people stuck in jail even if they pose no threat. Ogg recently supported a successful lawsuit against the system, which a federal judge ruled unconstitutional.

In January, the mayor of New Hope (pop. 633) came out to her constituents as transgender, making her the state’s first openly transgender mayor. Since then, she has been one of the most high-profile opponents of a Republican-led effort to pass a bathroom bill, similar to the one signed (and partially repealed) in North Carolina. “One day, everybody will be treated with respect and equality, and history will tell that story,” Herbst told a committee considering the legislation in April.

Terrified about what would happen to her own family after the election (her husband is a DREAMer from Mexico), the 35-year-old veteran organizer founded Jolt, a group aimed at mobilizing Latino voters that is at the forefront of the SB 4 resistance. Tzintzun isn’t new to organizing. Her previous effort, the still-active Workers Defense Project, was described by the New York Times as “one of the nation’s most creative organizations for immigrant workers.”

The Austin-­based philanthropist runs Annie’s List, a political action committee, modeled on Emily’s List, that works to elect pro-choice, progressive women in Texas. Since its 2003 founding, the group has been a notable force in the state, helping to elect Democrats, including Neave and Ogg.

In a postelection malaise, the Houston native wanted a way to turn the resistance movement into a routine. “Almost like hygiene,” she explained. “You have to floss your teeth; you have to fight Donald Trump.” The result was Daily Action—which blasts a daily alert to its 300,000 subscribers directing them to make one call to resist the Republican agenda. In May, Moser jumped into the crowded congressional race to challenge Rep. John Culberson in the suddenly swingy 7th District.

This fourth-­generation Tejana (and ACORN alum) co-founded the Texas Organizing Project, which aims to mobilize minority voters in the state’s megacit­ies by addressing local issues, from bail reform to sidewalks. The group played a key role in last year’s elections in Harris County, where Democrats won most offices.