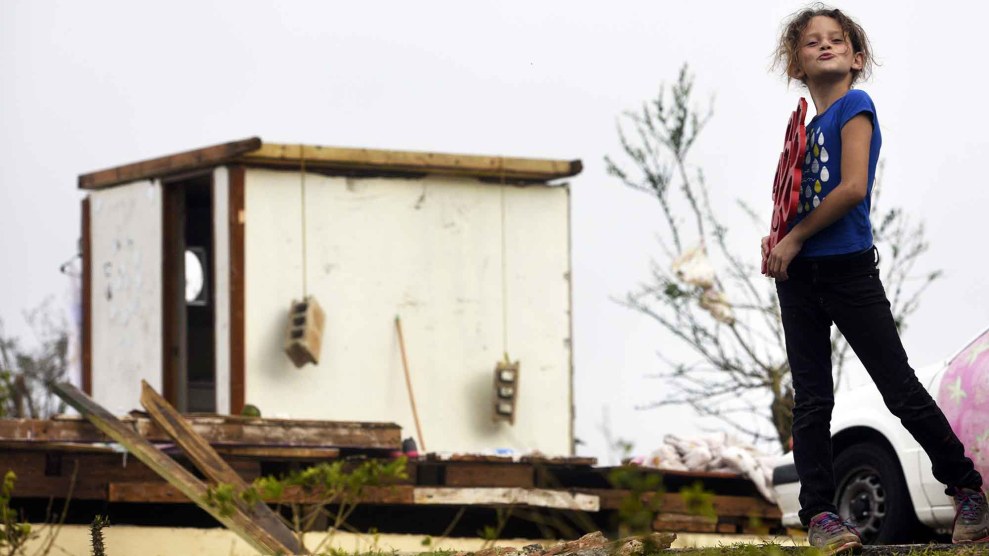 Karlian Mercado,7, holds a frame of family photographs on the foundation of her destroyed home in Hayales De Coamo, Puerto Rico. Carol Guzy/ZUMA

As the 3.4 million American citizens in Puerto Rico struggle to recover after Hurricane Maria’s widespread devastation last week, lawmakers in Washington are pondering the size of the aid package and how quickly it can be delivered. In the wake of Hurricane Harvey earlier in the month, Congress pulled together a $15 billion aid package for Texas that was signed by President Donald Trump in a little more than a week. It appears that Puerto Rico will not be so lucky.

On September 20, Hurricane Maria lashed Puerto Rico with 155-mile per hour winds, wiping out the island’s entire electric grid and most of its agricultural sector. Puerto Rico Gov. Ricardo Rosselló on Monday called the aftermath of Hurricane Maria an “unprecedented disaster,” and asked for “swift” help for Puerto Rico. But a senior congressional source, who requested anonymity, estimates that the financial aid package could take as long as two or three weeks.

Puerto Rico will be treated “like any state” in terms of disaster relief, the aid tells Mother Jones, “so the next step is the administration sending another request to Congress.” As far as timing, the aide says, “We’re hearing the first or second week of October,” but it all depends on when the White House makes the request.

The White House press office did not respond to a question about the Puerto Rican aid package. But during her Monday press briefing, White House Press Secretary Sarah Huckabee Sanders described the federal response as “anything but slow,” adding, “there’s been an unprecedented push through of billions of dollars in federal assistance that the administration has fought for.” Trump signed a disaster declaration for the island last Thursday clearing the way for some federal funding for disaster relief efforts—but the FEMA assistance, as necessary as it is, does not begin to address the bigger problems.

One Democratic congressional aide tells Mother Jones that funding for anything related to Puerto Rico always has been difficult. During the island’s financial crisis last year, he says, the selling point for the final agreement, known as PROMESA, was that “it won’t cost a nickel—Washington would love for that to be true for any number of things” related to Puerto Rico. The legislation set up a system that allowed Puerto Rico to attempt to restructure its debt under a fiscal control board appointed by Congress.

“The devastation is vast. Our infrastructure and energy distribution systems suffered great damages.”

“The devastation is vast,” Puerto Rico Gov. Ricardo Rosselló said in a statement. “Our infrastructure and energy distribution systems suffered great damages. We are collaborating with the federal government in emergency response and have received a tremendous outpour of solidarity from people all over the nation. But make no mistake—this is a humanitarian disaster involving 3.4 million U.S. citizens. We will need the full support of the U.S. government.”

As catastrophic as Harvey was for Texas and other parts of the Gulf Coast, Puerto Rico’s recovery is far more complicated. As an island 1,000 miles from the US mainland, greater logistical challenges—and more time—are necessary to send the island much-needed supplies such as generators, fuel, and water. Adding to the damage and the rebuilding effort is the island’s ongoing debt crisis which PROMESA only began to address. The island’s government, a fiscal control board appointed by Congress, and a group of creditors still are trying to sort through more than $70 billion in outstanding debt—in addition to tens of billions of dollars in pension obligations. The fiscal control board is the final arbiter of how money is spent in Puerto Rico and has already pushed through a host of austerity measures that include a 10 percent cut to pensions, increased university tuition for some, the closure of some schools, and the firing of thousands of public workers. In the wake of Hurricane Maria, the board gave the governor permission to redirect $1 billion for immediate emergency relief efforts and said it would “expeditiously approve” additional budget requests related to hurricane recovery.

It’s unclear how big an aid package is needed in Puerto Rico. Before the Category 5 storm made landfall, one expert estimated Maria would cause more than $30 billion in damage to Puerto Rico and the US Virgin Islands, according to Bloomberg. The tab for damage in Texas, Florida, and other Gulf Coast states will exceed $150 billion, according to one estimate, further stressing FEMA’s budget. The federal agency will be providing at least 75 percent of the money needed to rebuild critical infrastructure, David Merrick, the director of the Emergency Management and Homeland Security program at Florida State University, told the New York Times. Jennifer González-Colon, the island’s non-voting representative to Congress, asked Trump to waive the 25 percent cost-sharing requirement, but it’s unclear what the president’s position on the request is.

A Department of Homeland Security spokesperson tells Mother Jones that FEMA has spent approximately $625 million “in support of the ongoing response to Hurricane Maria,” and nearly $5 billion total in response to Harvey, Irma, and Maria combined.*

Kenneth McClintock, the island’s former Secretary of State, tells Mother Jones that in addition to a congressional aid package for relief and rebuilding, “we need additional security personnel.” We spoke on Monday through a spotty phone connection from his home in San Juan, the island’s capital. “The police have been overworked for five or six days,” he says, explaining the need for manpower without specific training to deal with security at grocery stores, gas stations, and intersections for traffic control. The Daily Beast reported Sunday that looting has become more widespread throughout the island, and a 7 p.m. through 5 a.m. curfew has been imposed due to safety concerns. El Nuevo Dia, the main local newspaper, reported Sunday that 25 people have been arrested for looting as of Sunday evening.

The US Department of Energy reported that as of Sunday at 4 p.m., nearly all of Puerto Rico’s energy subscribers were without power, except for those locations with generators. McClintock says that he has heard of pockets of electricity coming back online, and communications coming back steadily, but slowly.

House Minority Leader Nancy Pelosi (D-Calif.) on Monday issued her own statement on Puerto Rican aid. She called on the Trump Administration to “immediately make available additional Department of Defense resources for search-and-rescue operations, law enforcement, and transportation needs,” and called on Republicans to “join with Democrats in Congress to address the needs of the communities in crisis by swiftly passing a robust relief package that provides assistance not only today, but throughout the long road to recovery.”

House Speaker Paul Ryan (R-Wisc.) called the “stories and images coming out of Puerto Rico…devastating,” and said in a statement Monday that Congress was working with the White House so the people of Puerto Rico will “have what they need.”

During the White House briefing, Sanders explained that although supplies are flowing into Puerto Rico in the short term, the long-term relief effort will be decided only after Homeland Security Adviser Tom Bossert and FEMA Administrator Brock Long survey the damage. “Once we have a greater insight into the full assessment of damage then we’ll be able to determine what additional funds are needed,” she said. “We want to make sure that the funding is provided, but we also want to make sure that we’re actually funding the correct things.”

Time will tell how Puerto Rico’s debt crisis will affect the recovery from Hurricane Maria. Before the storm hit, Rosselló and the fiscal control board were fighting over a public employee furlough that the board demanded. Rosselló said he would go to prison rather than carry out the furlough. The board quickly approved the $1 billion in diverted funds for hurricane relief efforts due to the storm, but going forward it has to find a way to make massive cuts to the island’s budget in order to pay down the debt. Under the best of circumstances that would have led to a stagnant economy through 2024, says Mark Weisbrot, a co-director of the Center for Economic and Policy Research.

Even that rosy projection didn’t fully address the debt, so more cuts will be required. And that was before Hurricane Maria wiped away the island’s electrical infrastructure and devastated its agricultural sector, one of the few stable and sucessful parts of the island’s economy. Now the recovery is in the hands of Congress, Trump, and a fiscal control board appointed by Congress.

“That’s the thing about not having control over your own most important economic policies,” Weisbrot wrote in an August 17 New York Times op-ed. “It’s not as noticeable when times are good, but when things go south, it can be a long nightmare.”

* This story has been updated to include a response from FEMA regarding estimates of money spent on hurricane relief operations.