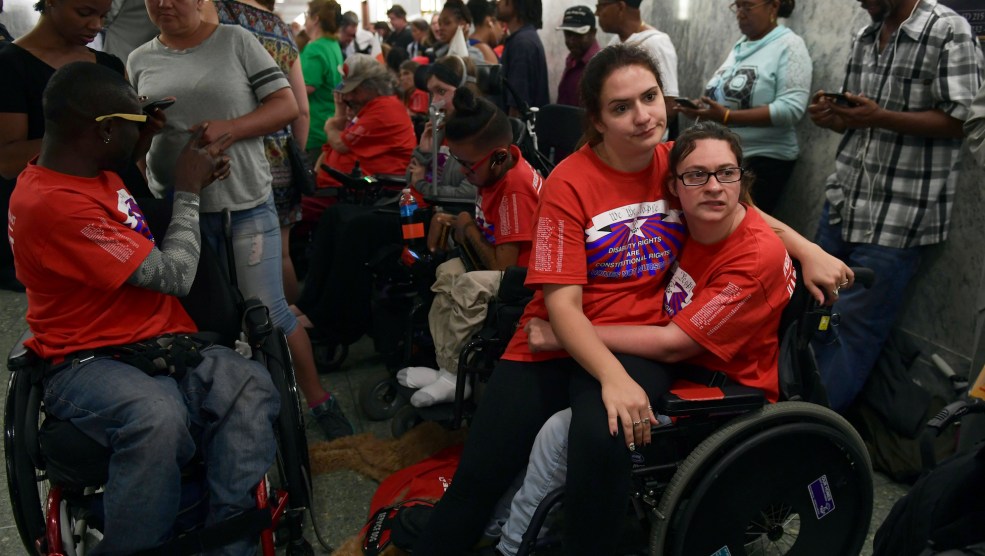 Shaylin Sluzalis, sits with her sister Brittani Sluzalis, a Medicaid recipient, as they and others from ADAPT, rally prior to a hearing by the Senate Finance Committee on the Graham-Cassidy health care repeal.Susan Walsh/AP

At a hearing on the Graham-Cassidy health care bill, Capitol Police removed a number of people in wheelchairs who were protesting proposed cuts to Medicaid funding. “No cuts to Medicaid, save our liberty,” the protesters chanted. The protests, arranged by disability-rights group ADAPT, began as soon as Finance Committee Chairman Orrin Hatch (R-Utah) gaveled in the hearing.

After returning the hearing to order, Hatch told protesters: “If you can’t be in order, then get the heck out of here.” Hatch called the demonstrations “good fodder for Twitter,” before adding that the committee is usually above such “shenanigans.”

The latest GOP bill to repeal Obamacare would impose a per capita cap on how much money the federal government offers states for Medicaid, which would decrease spending on the program by hundred of billions of dollars. According to the left-leaning Center for Budget and Policy Priorities, this part of the bill would cut Medicaid spending by $175 billion between 2020 and 2026.

Below is a live stream of the hearing.

Below are videos of protestors being removed.

This is Colleen of ADAPT.

I have no idea what this country is supposed to be pic.twitter.com/de86rRuLiM

Bill Cassidy is literally yawning as protestors are carried away. pic.twitter.com/TqINKjrLx6