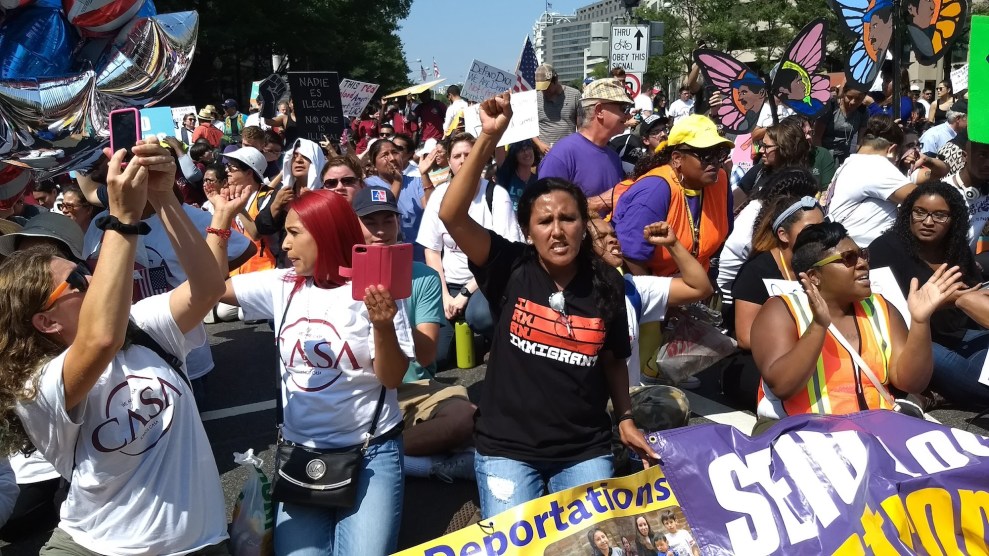 Across the country, undocumented immigrants and their allies are taking to the streets to protest President Donald Trump’s decision to phase out protections from deportation for nearly 800,000 young immigrants known as Dreamers.

Under the terms set by the Trump administration on Tuesday, Congress has six months to pass legislation before Dreamers begin to lose their protected status under the Deferred Action for Childhood Arrivals (DACA) program created by President Barack Obama in 2012. After Dreamers’ DACA permits expire, they will become subject to possible detention and deportation.

In Washington, DC, hundreds of people marched from the White House to Trump International Hotel, chanting “Yes We Can,” “Move Trump; get out the way,” and “We are the immigrants, the mighty, mighty immigrants.”

At protest for Dreamers headed to Trump Hotel people chant "Whose City? Our City. Whose America? Our America." pic.twitter.com/D07OEzXwVC

Protesters against Trump's decision to end DACA sing This Land Is Our Land in English and Spanish. pic.twitter.com/FnabLhTN0y

Activists from Make The Road with "Sin Miedo" and "We Fight Back" flags say "Yes. We can." pic.twitter.com/pork7PmuPl

In New York, a dozen protesters were arrested for staging a sit-in outside Trump Tower.

In Denver, hundreds of students walked out of class to protest Trump’s decision.

#Breaking: Students at Denver schools are walking out of classes in protest of #DACA announcement
WATCH: https://t.co/fYKBG4jvCA pic.twitter.com/ErH0Hz86oq

Dreamers have vowed to fight for their right to stay in the United States. In Washington, Rainy Leonor, a 23-year-old DACA recipient who took a bus down from Reading, Pennsylvania, told Mother Jones, “We knew this day was going to come, but we didn’t think it was going to be so fast.” Leonor, who has been protected by DACA since 2013, said the next step is to pressure as many members of Congress as possible to act. Like many Dreamers, Leonor said she was uncertain about DACA’s future:.”You never know,” she said. “You never know where this may go.”