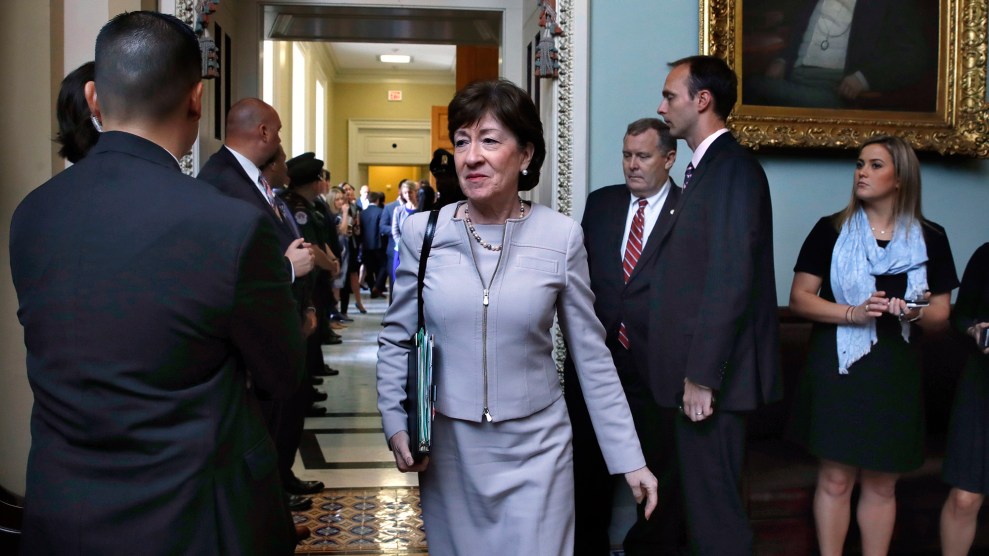 Sen. Susan Collins leaving a meeting with Republican colleagues. Collins announced Monday that she will not support the latest Trumpcare bill. Jacquelyn Martin/AP

The nonpartisan Congressional Budget Office confirmed on Monday that millions of Americans would lose their health insurance under the revised version of the Senate Republicans’ latest health care bill. Medicaid recipients and people who get their healthcare through Obamacare exchanges would be the main people affected, the CBO found. Shortly after the analysis was released, Sen. Susan Collins (R-Maine) announced she will oppose the bill, meaning the effort to repeal Obamacare effort is likely dead—for this year, at least.

The bill, known as Graham-Cassidy after its Republican authors, is in many ways more extreme than past versions of Trumpcare. As Mother Jones has reported, it would allow insurance companies to go back to charging higher rates for people with preexisting conditions and offering junk plans that lack essential coverage.

Under Graham-Cassidy, Medicaid spending would fall by about $1 trillion between 2017 and 2026, forcing millions out of the program, the CBO reported. The biggest drop would come from eliminating Medicaid funding that was included in the Affordable Care Act. The CBO also found that states that expanded Medicaid under Obamacare would receive about 30 percent less funding, while states that did not expand Medicaid would get roughly 30 percent more.

For past bills, the CBO has given specific estimates of how many people would lose health insurance. But with Republicans trying to ram their bill through by September 30, the agency didn’t have time for a full analysis. CBO “would need at least several weeks to provide point estimates of the effects on the deficit, health insurance coverage, and premiums,” the preliminary analysis notes. But the Brookings Institution found that roughly 21 million people could lose their care by 2020 if Graham-Cassidy passes—after 2026, Brookings estimated, that number could grow to 32 million.

Collins said in a statement that the Medicaid cuts would “have a devastating impact [on] a program that has been on the books for 50 years and provides health care to our most vulnerable citizens, including disabled children and low-income seniors.” She also criticized the rushed process: “Sweeping reforms to our health care system and to Medicaid can’t be done well in a compressed time frame.”

Sen. John McCain (R-Ariz.) and Rand Paul (R-Ky.) have also come out against the bill. If all three Republicans maintain their opposition, the bill will be dead. Senate Democrats all oppose Graham-Cassidy, and the Republicans can only afford to lose two votes from within their own ranks.