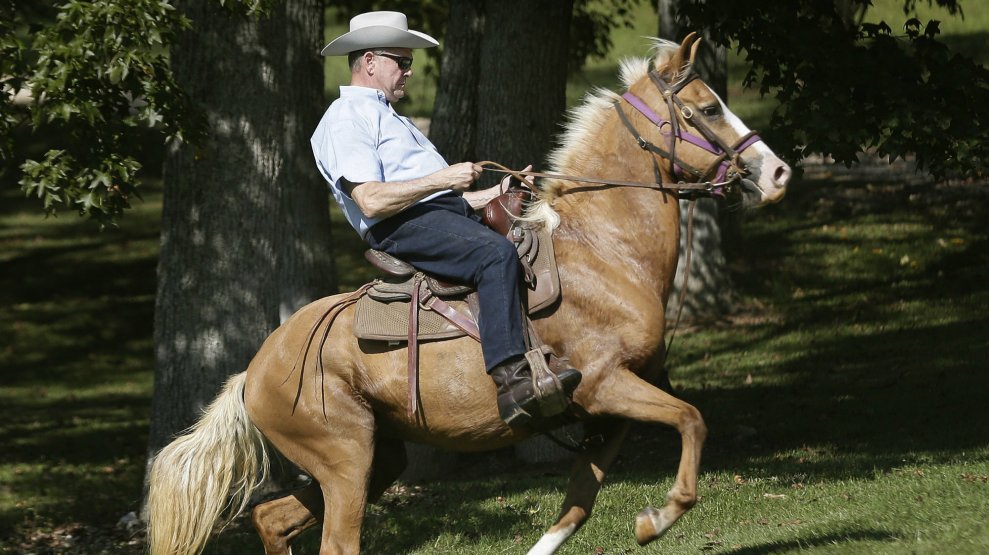 Alabama voters went to the polls Tuesday for a GOP primary election that’s being billed as a “battle for the soul of the Republican Party.” The contest—a runoff between incumbent Sen. Luther Strange and Roy Moore, an extreme right-wing former chief justice of the state’s Supreme Court—will determine the party’s nominee for a US Senate special election scheduled for December.

The race has taken on national significance, with President Donald Trump and Vice President Mike Pence backing Strange, who was temporarily appointed to fill the seat vacated earlier this year when Sen. Jeff Sessions was confirmed as Trump’s attorney general. Strange is seen as the establishment candidate in the race; since taking office, he’s sided with the president on 92 percent of votes, according to FiveThirtyEight. Strange’s loyalty to Trump hasn’t gone unnoticed.

Looking forward to Friday night in the Great State of Alabama. I am supporting "Big" Luther Strange because he was so loyal & helpful to me!

Despite Strange’s campaign vastly outspending Moore’s and getting nearly $11 million dollars of support from allies, including Senate Majority Leader Mitch McConnell (R-Ky.) and other GOP leaders, several recent polls have shown Moore with a double-digit lead.

Moore is a colorful figure with a flair for drama—and extremism. As we explained last month:

In 2003, Moore was dismissed from the bench after he refused to remove a 5,280-pound Ten Commandments monument that he had installed at night without permission, despite a court order from another judge who ruled that the religious statue was unconstitutional. Alabama voters reelected Moore to the high court again in 2012, but Moore ignored the rules once more. After the US Supreme Court determined bans on same-sex marriage were unconstitutional in 2015, Moore directed probate judges to not issue marriage licenses, a move that got him suspended for the rest of his term. Moore resigned in April to run for Session’s Senate seat.

Moore’s disregard for court rulings has made him a favorite of evangelicals, who tend to be committed voters, making a low turnout primary good news for the candidate. Moore wears the disciplinary action against him as a badge of honor, arguing this makes him more trustworthy than the other candidates. “I’ve stood for traditional marriage and the acknowledgement of God, and with that, I have been reported to ethics commissions,” Moore said on the campaign trail. “It’s not what you say, it’s what you do.”

At a campaign rally Monday night, More pulled out a gun just in case anyone had any questions about his support for the Second Amendment.

Moore promises to be just as difficult in the Senate. The latest Republican effort to undo much of Obamacare—which GOP leaders abandoned Tuesday afternoon—would have resulted in millions of additional Americans going without health insurance. That wasn’t enough for Moore. According to his spokesperson, Moore opposed the bill and would refuse to vote for anything other than a full repeal of Obamacare. (Republicans failed to pass a version of “full repeal” earlier this year; the nonpartisan Congressional Budget Office estimated that such a plan would increase the number of uninsured Americans by 32 million by 2026.)

In that sense, a victory by Moore could actually be good news for Democrats. If he won’t vote for anything other than a full repeal, that could make it even more difficult for Republicans to pass a health care bill in the future. Plus, some political observers think that Democrat Doug Jones, a former US attorney, would actually have a chance—albeit a long-shot one—of defeating Moore in December in this deeply red state.

You can follow the results of Tuesday’s runoff below, via Decision Desk HQ: