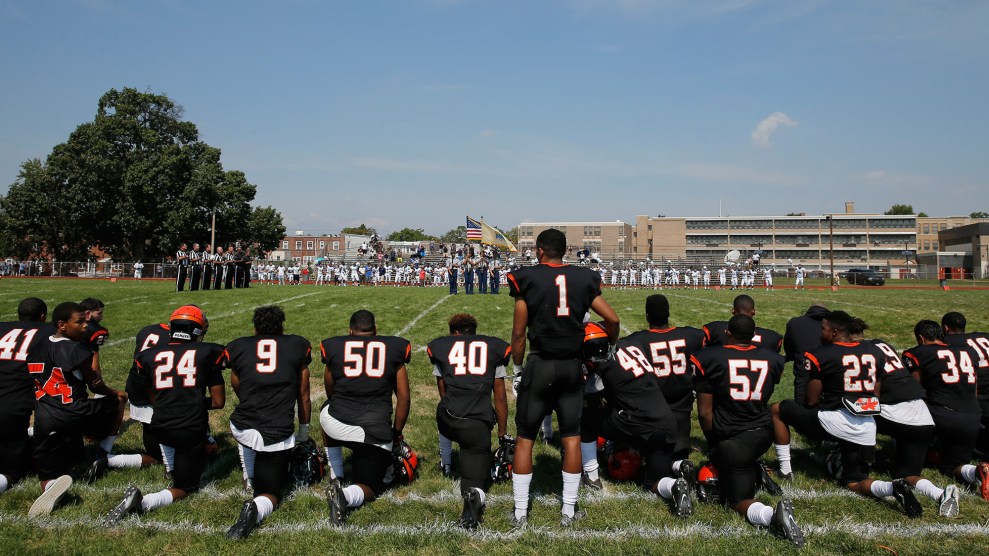 Less than a week after President Donald Trump railed against NFL players protesting police brutality by kneeling during the national anthem, the principal of a Louisiana high school sent a memo making it clear that student-athletes who don’t stand during the anthem would face a loss of playing time and, if they continued, removal from their team.

And it has begun.

Will kick off any players who don’t stand during the National Anthem. pic.twitter.com/lfNWyW7z5f

The directive came after Scott Smith, superintendent of the Bossier Parish School District, where Parkway High School is located, issued a statement that said students should stand during “The Star-Spangled Banner” out of respect for military personnel.

“In Bossier Parish, we believe when a student chooses to join and participate on a team, the players and coaches should stand when our National Anthem is played in a show of respect,” read Smith’s statement. “Our principals and their coaching staffs have sole discretion in determining consequences should a student athlete elect not to stand during the National Anthem and they are making their expectations known to players and their families this week. As Superintendent, my administration will be in full support of these school-based decisions.”

The district’s announcement quickly drew criticism from civil liberties advocates, who noted that the Supreme Court ruled in 1943 that it was unconstitutional for a school to require a student to stand during patriotic ceremonies like the Pledge of Allegiance. Punishments for kneeling during the anthem, they argued, likely wouldn’t hold up in court.

The Supreme Court ruled that students don't have to stand for the Pledge of Allegiance—that goes for the national anthem on the ballfield too. https://t.co/ijNa3tn1U0

Nearly 75 years ago in W. VA State Bd of Ed v. Barnette #SCOTUS held it unconstitutional to require a flag salute or Pledge of Allegiance. https://t.co/JunIGseapO

The school has not yet responded to a request for comment.