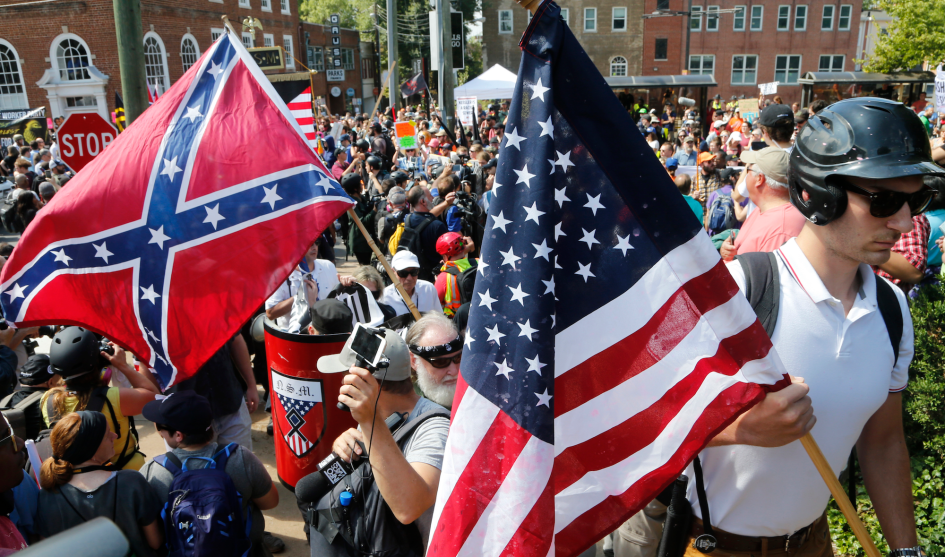 As Virginia Gov. Terry McAuliffe declared a state of emergency in response to white supremacist protests in Charlottesville, President Donald Trump on Saturday took to Twitter:

We ALL must be united & condemn all that hate stands for. There is no place for this kind of violence in America. Lets come together as one!

Trump didn’t refer to Charlottesville in the tweet. He tweeted again 40 minutes later, after a backlash on social media. In both messages, the president made no mention of the groups behind the “Unite the Right” rally, which was organized to protest the removal of a confederate statue honoring Robert E. Lee.

Am in Bedminster for meetings & press conference on V.A. & all that we have done, and are doing, to make it better-but Charlottesville sad!

The statement Saturday marks a sharp contrast to the president’s forceful denunciations of protests in other contexts—especially at his rallies. In those situations, he has often called protesters “criminals” and “thugs,” encouraged violence by his supporters, and dog-whistled to racism.

Why is it that the horrendous protesters, who scream, curse punch, shut down roads/doors during my RALLIES, are never blamed by media? SAD!

The "protesters" in California were thugs and criminals. Many are professionals. They should be dealt with strongly by law enforcement!

The protesters in New Mexico were thugs who were flying the Mexican flag. The rally inside was big and beautiful, but outside, criminals!

Professional anarchists, thugs and paid protesters are proving the point of the millions of people who voted to MAKE AMERICA GREAT AGAIN!