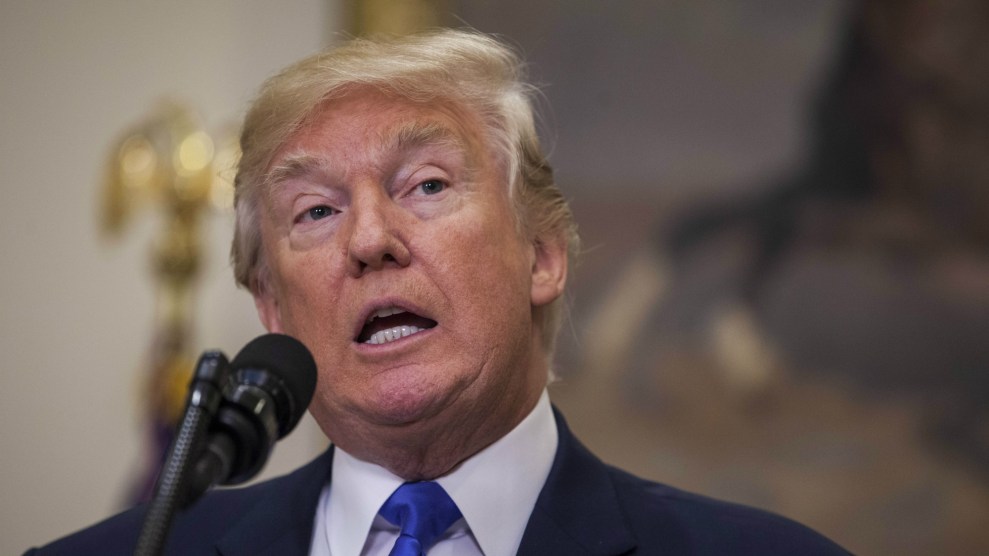 Announcing his support for a bill to drastically reduce legal immigration into the United States, President Donald Trump made an appeal to two segments of the electorate. African Americans and Latinos, he said, have suffered economically from competition from foreign-born workers and would benefit from the measure.

“Among those who have been hit hardest [by current levels of immigration] in recent years are immigrants and, very importantly, minority workers competing for jobs against brand-new arrivals,” Trump said on August 2, joined by Sens. David Perdue (R-Ga.) and Tom Cotton (R-Ark.), the sponsors of the legislation, called the RAISE Act. The claim was repeated later that day by White House senior policy adviser Stephen Miller, who said that legal and illegal immigration have “had a deleterious impact on African American employment in general and certainly African American males.”

The RAISE Act was quickly met with criticism from both sides of the aisle, making it unlikely to become law in its current form. But in backing the measure, the Trump administration returned to a claim often cited by the president and anti-immigration groups: that immigration has dampened the wages and employment prospects of low-skilled American workers—and particularly African Americans and native-born Latinos.

But the RAISE Act marks the first time that the argument has made its way into actual legislation. The bill would sharply limit the ability of green card holders to sponsor family members, eliminate a visa program that helps people from countries underrepresented in the US immigrant pool, and create a “merit-based” point system that would prioritize high-skilled immigrants who speak English.

Immigrant advocates counter that by framing the issue this way, the administration is suggesting that minority groups fight for a place on the bottom rungs of the economic ladder. “The framing of ‘this policy would benefit African Americans’ is a typical tactic of pitting marginalized groups against each other,” says Nana Brantuo, the policy manager for the Black Alliance for Just Immigration, which advocates for black immigrants in the United States. Brantuo says the RAISE Act would have a particularly devastating effect on immigrants from Africa and the Caribbean, the majority of whom enter the United States through the programs targeted by the legislation. The bill is “scapegoating immigrants as the problem,” she says.

Research into the effects of immigration on African American employment has reached mixed conclusions. The Center for Immigration Studies, which seeks to reduce immigration levels, argues that immigration has significantly reduced black employment opportunities and wages over several decades, a claim that has also been backed by some economists. But others have found a smaller effect. Citing a 2017 report from the National Academy of Sciences, the Washington Post reported that “low-skilled immigration did have small effects on wages of certain subgroups of native workers: high school dropouts, teenagers, low-skilled African American workers, and low-skilled Hispanics (immigrants and native-born), especially those with poor English skills.” But the Post also notes that according to the researchers, “over a period of 10 years or more, the impact of immigration on wages of native-born workers is ‘very small,’ and not enough to account for stagnant wages within those groups.”

With black unemployment at roughly 7 percent—and the jobless rate of low-skilled young black men several times higher—it’s clear that African Americans continue to struggle in the job market. But academics attribute much of the issue to other barriers to employment, including lower levels of educational attainment, mass incarceration, and, in some cases, discrimination. They say that while some industries may move to hire more African Americans at higher wages, cutting immigration is unlikely to significantly boost the prospects or wages of low-skilled African Americans. “There are lots of other things that would keep these workers out if immigrants disappeared,” says Harry Holzer, a professor of public policy at Georgetown University. “So many other things have hurt them: technology, globalization, higher rates of incarceration. Immigration is probably pretty far down the list.”