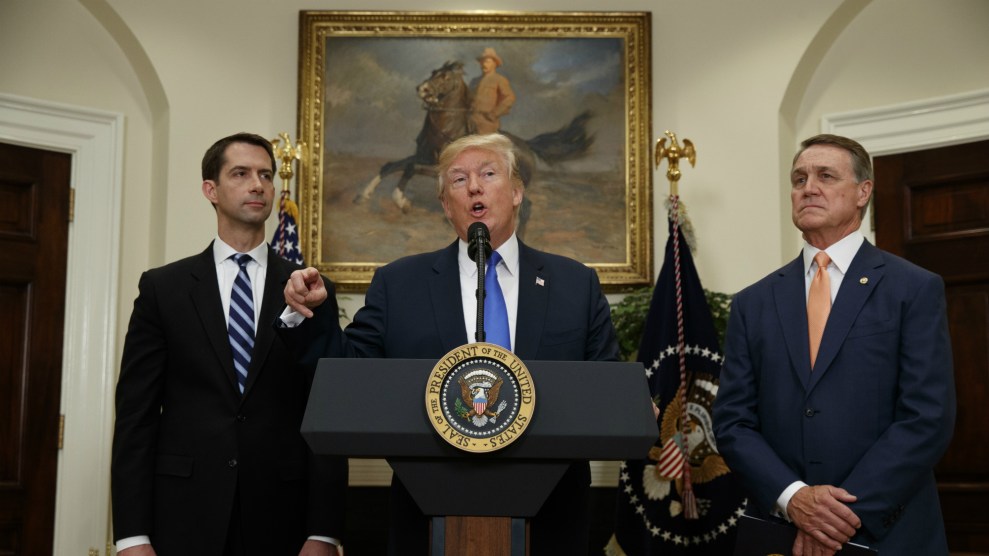 President Donald Trump threw his support on Wednesday behind legislation that would drastically limit legal immigration to the United States.

The president appeared with Sens. David Perdue (R-Ga.) and Tom Cotton (R-Ark.) Wednesday morning to urge the passage of the Reforming American Immigration for Strong Employment (RAISE) Act, a bill that would slash legal immigration to the United States by as much as 50 percent over the next decade. The legislation, which is an updated version of a measure introduced by Perdue and Cotton earlier this year, would replace the current immigration system with a “merit-based” point system. It would prioritize highly skilled immigrants by greatly reducing the ability of green card holders to bring family members to the United States and eliminating a visa lottery program that helps immigrants from countries that are less represented in the US immigrant population.

“This would be the most significant reform to the immigration system in half a century,” Trump said. He added that by changing how green cards are distributed, the measure “will reduce poverty, increase wages, and save taxpayers billions and billions of dollars.” The White House has worked in recent weeks to reintroduce Perdue and Cotton’s earlier bill, with the input of Trump senior aide and staunch immigration opponent Stephen Miller and the support of chief strategist Steve Bannon.

Miller forcefully defended the legislation during during a White House press briefing on Wednesday afternoon. “We’d like to create a permanent change to our immigration system that will endure through time,” he said. “What President Trump has done today is one of the most important legislative moves that we’ve seen on this issue in many, many years.”

Sparks flew during a seven-minute exchange between Miller and CNN reporter Jim Acosta. Acosta, whose Cuban father received a green card, asked whether the legislation “changed what it means to be an immigrant” and contradicted the poem inscribed on the Statue of Liberty. Miller was visibly flustered. Acosta later questioned a provision in the legislation to make speaking English a condition for a green card, asking, “Are we just going to bring in people from Great Britain and Australia?” Miller went on the offensive.

“I have to honestly say, I am shocked at your statement that you think that only people from Great Britain and Australia would know English,” Miller said. “It reveals your cosmopolitan bias to a shocking degree.”

Miller added that the reporter’s remarks were “so insulting to millions of hardworking immigrants who do speak English from all over the world.”

The announcement was immediately met with criticism from Democrats. On Twitter, Rep. Yvette Clarke (D-N.Y.), the co-chair of the Congressional Caribbean Caucus, called the bill “a direct attack on African and Caribbean families and refugees,” who often rely on the diversity visa lottery or family sponsorship to enter the United States. “Instead of catching criminals, Trump wants to tear apart communities and punish immigrant families that are making valuable contributions to our economy,” Democratic National Committee Chairman Tom Perez said in a statement.

The measure faces a difficult path in the Senate, which has struggled to advance immigration legislation in recent years. Sen. Chuck Grassley (R-Iowa), chair of the Senate Judiciary Committee,  told BuzzFeed that passing the measure without significant amendments would likely be “an impossibility.” Sen. Lindsey Graham (R-S.C.) tweeted that it would be “devastating to SC economy which relies on this immigrant workforce.”

Immigration experts say that despite Trump’s claims, the RAISE Act might not bring the benefits that the administration is touting. “The US currently has a pretty good system for recruiting skilled workers using temporary visas, which allows skilled workers (mostly) to work in the US for two three-year terms and get well-integrated into the labor market,” Princeton sociologist and immigration expert Douglas Massey tells Mother Jones in an email. “If they would lift the cap on adjustments from temporary skilled visas to permanent resident visas we would have a pretty good system for skilled recruitment without implementing some kind of point system.”

He adds, “If Trump et al think that a ‘merit’ system will cut down on immigration by minorities, they are quite mistaken.”

Noah Lanard contributed reporting to this story. This post has been updated to include Miller’s comments at the press briefing.