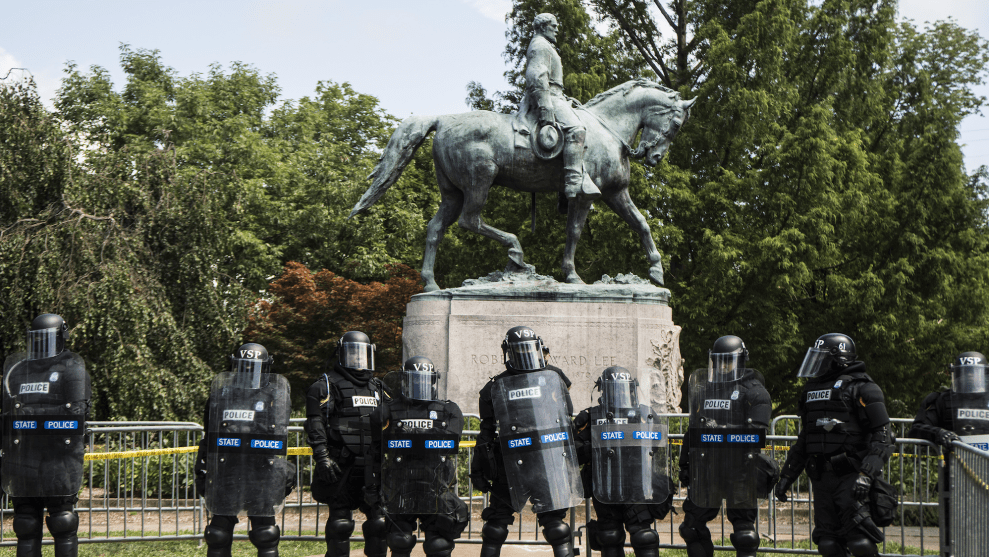 Ed Gillespie, Virginia’s Republican gubernatorial nominee, spent the spring and summer campaigning against Charlottesville’s decision to remove a statue of Confederate General Robert E. Lee. Following this weekend’s outbreak of white supremacist violence in Charlottesville, Gillespie is remaining silent on whether his views have changed.

Confederate monuments became a major issue in the Virginia GOP primary after the Charlottesville city council voted in February to remove a sculpture of Lee. Gillespie responded by saying he opposed removing Confederate statues, but that it was ultimately a local issue. His primary opponent, Corey Stewart, a Trump-acolyte who considers General Lee a hero, interpreted that to mean Gillespie “would do nothing as governor to stop a locality from removing a statue.” Gillespie fought back by saying he believed the Charlottesville city councillors who voted to remove the sculpture should be voted out of office.

The issue became more heated after white nationalist Richard Spencer led a torch-lit demonstration in May to oppose the removal. “What brings us together is that we are white,” Spencer said at the Charlottesville protest. “We are a people, we will not be replaced.” Gillespie called it an “ugly display of divisive rhetoric and intimidation tactics,” but didn’t change his views about the monument.

Following this weekend’s violence, Gillespie, once again, condemned white supremacists’ hate speech and violence. “I agree with Governor McAuliffe; they need to go home,” he said in an interview posted on his Twitter account. “And they need to take that vile hatred with them. It does not belong here in the Commonwealth of Virginia.”

But Gillespie’s office has not responded to requests for comment from Mother Jones, as well as BuzzFeed, about whether he still supports keeping the Lee sculpture in place.

Rep. Tom Garrett, the Republican congressman who represents Charlottesville, has also not responded a request for comment from Mother Jones. In 2016, while serving in the state Senate, Garrett voted for a bill that would have blocked Civil War memorials from being removed. Virginia Gov. Terry McAuliffe later vetoed the bill.

Ralph Northam, Gillespie’s Democratic opponent, agrees that decisions about Civil War statues should be handled at the local level. But the similarities end there. “[I]f there are statues that are divisive and you know breed hatred and bigotry,” Northam said in a statement Monday, “then they need to be in museums.”