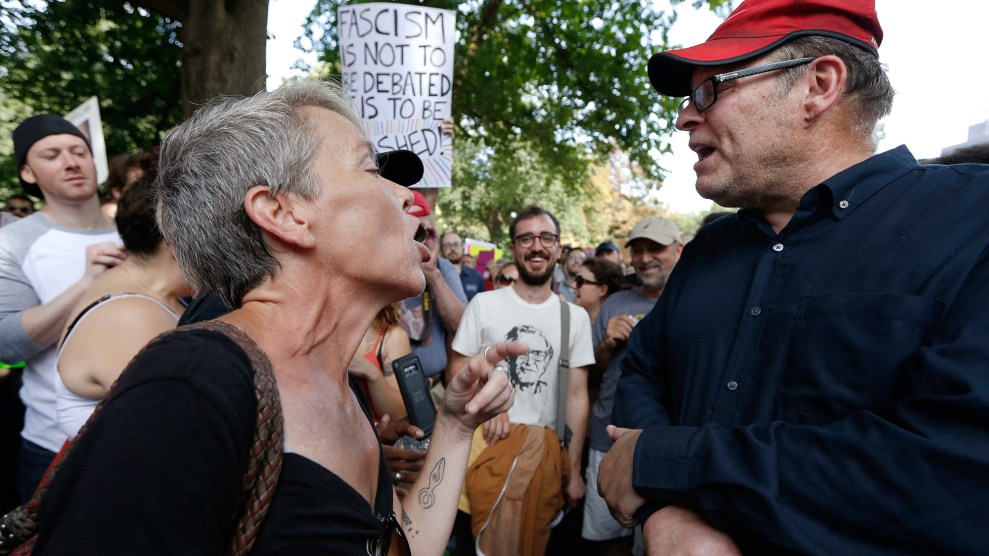 One week after a bitterly violent protest in Charlottesville, Va., that left one woman dead and 19 injured, tens of thousands of counter-protesters marched in at least 30 cities, including New York City, San Francisco, Chicago, Atlanta, and Washington, D.C. to demonstrate their opposition to white nationalism. The largest protest by far was in Boston, where an estimated 30,000-40,000 counter-protesters showed up, according to the Boston Globe. Only a handful of people attended the planned “Free Speech” protest, and they were quickly overwhelmed.

The fight over symbolism that pays homage to the Confederacy gained increasing momentum over the week after President Donald Trump criticized protesters “on both sides” of the battle,” all but defending the white nationalists who have vowed to, as they shouted in Charlottesville, “unite the Right.”

His statement was greeted with criticism from both parties, and demonstrations today were organized in anticipation of still more protests by white nationalists emboldened by his remarks. But if there were any Nazis planning to demonstrate, they were outnumbered by thousands of peaceful counter-protesters.

Here is a glimpse of what went on today, starting with Boston:

Thousands march in Boston for protests a week after deadly demonstration https://t.co/70Fzea2lw4 pic.twitter.com/rGG9ygUJhX

Demonstrators lined up in Chicago at the statue of a slave holder:

Hundreds gather at Chicago tomb of slaveholder Stephen Douglas for rally demanding #reparations from @UChicago in light of #Charlotteville. pic.twitter.com/YvTReeWKrg

Here are some images from Detroit:

#Detroit turn up. We are #ReclaimingOurHistory. With statues of Columbus, Detroit is not shy is symbols of white supremacy. pic.twitter.com/MmBj9BOMxR

We wouldn’t be here without the fight of our ancestors. Holding a #Detroit healing space at the Underground Railroad memorial. pic.twitter.com/SCXlti0Tzv

Song has been a central aspect of Black resistance, healing, and love. #ReclaimingOurHistory #Move2FreedomDET pic.twitter.com/jqAooN0Omb

Hundreds of people show up in Laguna Beach to stand up against hate and in support of Charlottesville, VA @cbsla pic.twitter.com/EePbGcKRgI