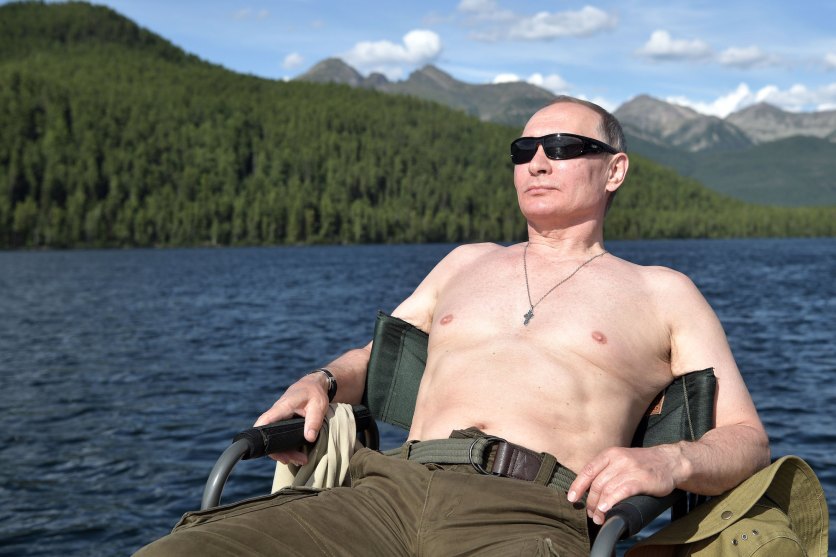 President Donald Trump trashed the Russia investigation once again last week at a rally in West Virginia, saying that “there were no Russians in our campaign” and denouncing “a total fabrication” to enthralled supporters. “Have you seen any Russians in West Virginia or Ohio or Pennsylvania?” he asked mockingly. “Are there any Russians here tonight? Any Russians?”

There may well have been, for anyone in the crowd scrolling through a smartphone.

As Trump spoke, Russian-linked social-media networks were busy attacking Trump’s national security adviser, Gen. H.R. McMaster, using the same type of digital operations that the Kremlin deployed against the 2016 presidential election. Russian-linked Twitter accounts had for days been piling onto a growing campaign by the so-called alt-right to purge Trump’s national security adviser—who is viewed by some of the president’s base as a “globalist tool” and a threat to their hardline nationalist agenda. Meanwhile, recent content from Russian state media RT and Sputnik has included stories such as “What’s Behind Trump’s Striking Back at Washington’s ‘Russophobes’”—a piece that went on at length about McMaster “falling out of favor with Trump.”

Some of Russia’s digital efforts to continue to disrupt and influence US politics are now more in the open, thanks to “Hamilton 68,” a new dashboard tracing Russian-linked information warfare on Twitter. A project of the nonpartisan Alliance for Securing Democracy, Hamilton tracks 600 accounts in real time, analyzing “a network of accounts linked to and participating in Russian influence campaigns,” according to the site.

The dashboard tracker shows that #FireMcMaster became a top trending hashtag on their global list last week. As the New York Times reported Friday, the #FireMcMaster hashtag was tweeted more than 50,000 times in the previous 48 hours. “Echoing the drumbeat were social media organs tied to the Russian government,” the Times said. The dashboard also shows that each day the Russian-led effort delivered some 20,000 to 25,000 tweets.

“Here’s what #Putin wants Americans talking about,” tweeted former FBI agent Clint Watts, one of the cyber warfare experts behind the project.

How did the campaign start? Hamilton 68 engineer J.M. Berger told Mother Jones, “It appears that the #FireMcMaster hashtag campaign may have originated on Reddit, and users there took it to Twitter and directed it to prominent alt-right figures until it began to trend. At some point in this process, the Russian influence networks picked up on it and began to amplify it as well.”

“The Knives are Coming Out for H.R. McMaster,” is the way Business Insider described the spreading alt-right campaign on Friday, amid a fresh round of McMaster-bashing stories from Breitbart News and others. “Allies of White House chief strategist Steve Bannon intensified their battle against national security adviser H.R. McMaster this week as McMaster began asserting more control over the National Security Council and fired officials appointed by his immediate predecessor, Michael Flynn.”

The Russians likely were happier when Flynn was running the NSC for Trump and cultivating friendly ties with departing Russian Ambassador Sergei Kislyak, who appears to be no fan of Hamilton 68. According to a story in Sputnik on Saturday, Kislyak said he was “surprised” by the effort. “A tool after tool is being created to counter RT and Sputnik that have become regarded as almost a threat of a hybrid invasion in many countries,” he said.

The Kremlin’s M.O. is also to work the active fault lines in US politics. Faced with the rising social-media campaign against his national security adviser, Trump late last week sought to tamp down speculation of an imminent firing: “General McMaster and I are working very well together,” he said in a statement to the New York Times. “He is a good man and very pro-Israel. I am grateful for the work he continues to do serving our country.”

Meanwhile, another campaign picked up by the Russians this week has been a surge in the use of the #ResignPaulRyan hashtag, again echoing pressure from the nationalist base against the speaker of the House to be more compliant with Trump’s agenda. Other trending topics spotlighted by the tracker include Russian-linked promotion of Trump TV, a new “real news” video series produced in Trump Tower that the Washington Post says “feels a lot like real propaganda—or state TV.”

Though the provenance of the war on McMaster may ultimately remain murky, the bottom line is that the alt-right (whose current rallying cries include “bring back Michael Flynn”) and the Russians are both engaged in an active campaign to get rid of the current national security adviser. But even if that doesn’t come to pass, the political intrigue and infighting involved contributes to the Trump administration’s turmoil, in part by exacerbating uncertainty among US allies about American leadership on national security matters. That is in Russia’s keen interest, and they will keep at it—even as Trump, as he did again on Monday, keeps calling the whole thing a hoax.