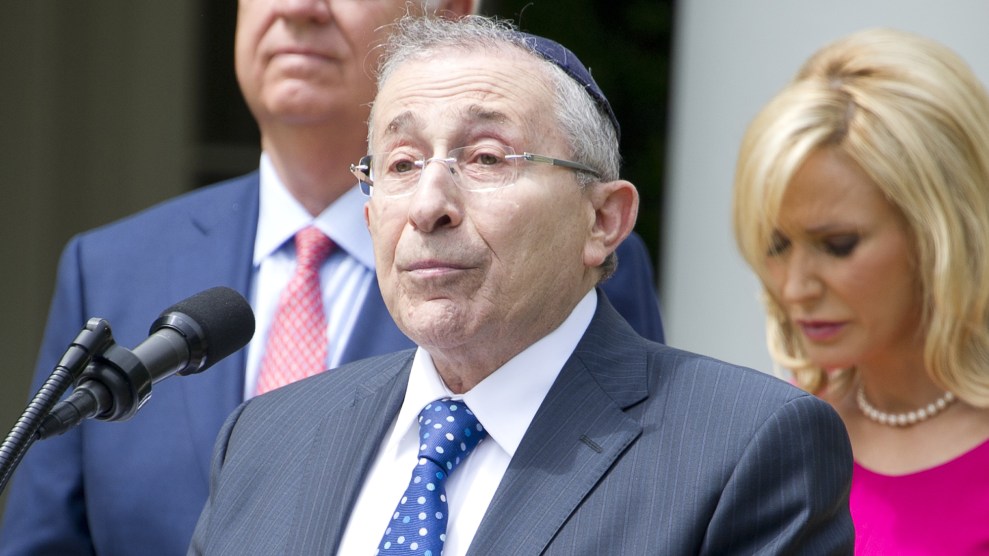 Rabbi Marvin Hier offers a prayer prior to United States President Donald J. Trump signing a Proclamation designating May 4, 2017 as a National Day of Prayer and an Executive Order ''Promoting Free Speech and Religious Liberty.''Ron Sachs/Zuma

Following President Donald Trump’s decision to blame “both sides” for the deadly violence in Charlottesville, several major groups of rabbis have announced that they will not be participating this year in an annual call with the president. “President Trump’s statements during and after the tragic events in Charlottesville,” the groups wrote in a letter released on Wednesday, “are so lacking in moral leadership and empathy for the victims of racial and religious hatred that we cannot organize such a call this year.”

During the Obama administration, Jewish groups began hosting a call between the president and rabbis around the country in the lead up to the Jewish High Holidays. Last year, more than 600 rabbis joined a call in which President Barack Obama said that his administration had helped lead the effort to fight global anti-Semitism.

“We pray that President Trump will recognize and remedy the grave error he has made in abetting the voices of hatred.”

In Wednesday’s letter, the Central Conference of American Rabbis, the Rabbinical Assembly, the Reconstructionist Rabbinical Association, and the Religious Action Center of Reform Judaism blasted Trump’s response to the white supremacist demonstrations in Charlottesville. The president, the rabbis said, has “given succor to those who advocate anti-Semitism, racism, and xenophobia.” Collectively, the groups represent thousands of Reform, Reconstructionist, and Conservative rabbis in the United States. Despite Trump’s claims to the contrary, the groups said blame for the violence “does not lie with many sides but with one side: the Nazi, alt-right and white supremacists who brought their hate to a peaceful community.”

“Our tradition teaches us that humanity is fallible yet also capable of change,” the rabbis wrote. “We pray that President Trump will recognize and remedy the grave error he has made in abetting the voices of hatred.”

Rabbis at Jared Kushner and Ivanka Trump’s synagogue in New York have also criticized the president’s Charlottesville response. “While we always avoid politics,” three rabbis at the congregation wrote last week, “we are deeply troubled by the moral equivalency and equivocation President Trump has offered in his response to this act of violence.” One of the rabbis who signed the letter, Haskel Lookstein, presided over Ivanka Trump’s conversion to Judaism.

On Tuesday, Marvin Hier, a rabbi who offered a Jewish prayer at Trump’s inauguration, said the solar eclipse provided a metaphor that the president should consider. “The moon is 400 times smaller than the sun, yet the moon had the capacity to do a complete eclipse on the sun,” he told Business Insider. “Now that should teach us about bigots and haters who started out as small groups.”