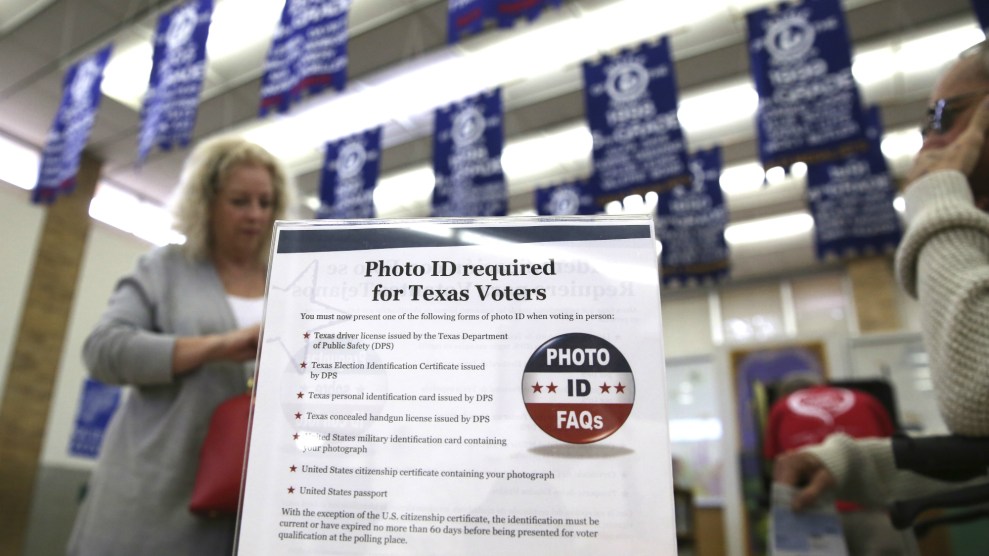 In 2016, a Texas polling place sign tells voters of identification requirements based off of the state's 2011 voter I.D. law, which a federal court found intentionally discriminatory.AP

On Wednesday, a federal judge in Corpus Christi issued a permanent injunction against Texas’s draconian voter ID law, which intentionally discriminates against black and Latino Texans in violation of the Voting Rights Act, the court said. The law in question is revised version of earlier legislation that required residents to present one of seven accepted forms of identification at the polls in order to cast a ballot. The options included gun licenses and a variety of government-issued IDs (but not state university IDs), skewing in favor of IDs more likely to be held by whites.

After a federal court deemed the original law discriminatory, the 5th Circuit Court of Appeals ruled that the law’s language would need to be softened before it could pass muster. In June, the legislature passed a modified version that retained many of the restrictive requirements present in the original.

Texas Attorney General Ken Paxton responded to Wednesday’s ruling with a statement promising to appeal the lower court’s “outrageous” new decision. “The U.S. Department of Justice is satisfied the amended voter ID law has no discriminatory purpose or effect,” he said. “Safeguarding the integrity of elections in Texas is essential to preserving our democracy.”

Indeed, after Donald Trump was elected, the DOJ withdrew its Obama-era claim that Texas lawmakers had passed the bill with discriminatory intent. In July, the department filed a court document in support of the revised bill.