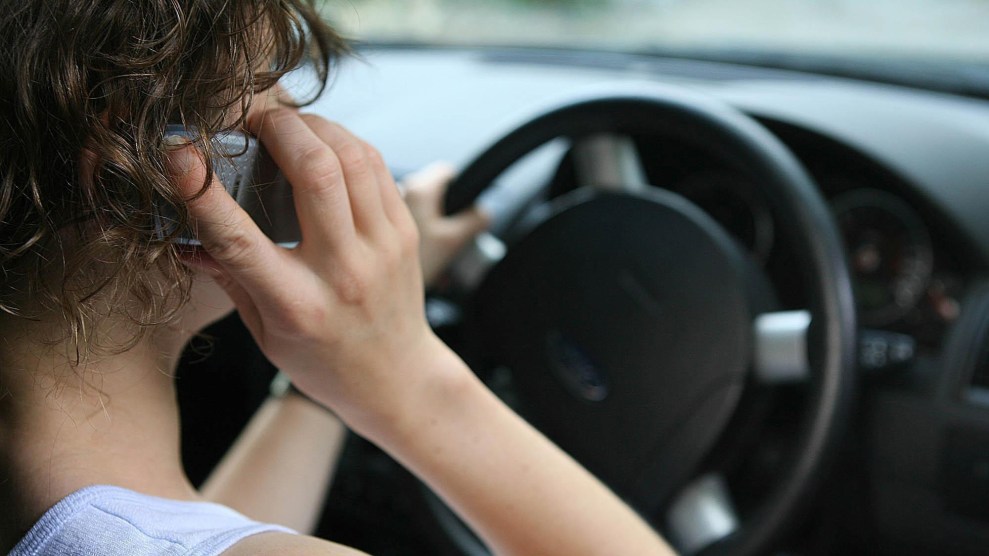 After many years in decline, traffic deaths have made a sharp comeback in the United States, passing a grim milestone last year—40,000 people. The cause of the increase has not been proven definitively, but it’s obvious to anyone with a brain: smartphones.

By now, just about everyone knows that it’s super unsafe to play with your phone while piloting a two-ton death machine at high speed. Texting, fumbling to call your spouse, resetting your navigation, or checking out Donald Trump’s latest tweet—it’s all the same. We warn friends and children of the dangers, but then, sometimes, despite our best intentions, the phone pings with some message we just have to look at. Just for a second or two.

“If you create the monster, you should have the duty to control it.”

Smartphone apps and functions are Pavlovian by design. They’re addictive. They beckon us. That’s the whole game. The manufacturers want to get our attention, even as our attention needs to be elsewhere.

Distracted-driving accidents are our own fault, of course. But they are also partly the responsibility of the companies that play on our animal instincts and profit handsomely from them. Today, the folks at FairWarning, a journalism nonprofit devoted largely to consumer investigations, explore how the communications industry has shirked that responsibility…

Christopher Kutz, a University of California Berkeley law professor, compared the situation to opioid drug makers “who distribute their product widely and then close their eyes to what seems to be a pretty inevitable risk of catastrophic misuse.” Companies in the mobile ecosystem ”should do much more to make it harder to consume while driving.”

In the piece, FairWarning founder Myron Levin—a former Los Angeles Times reporter whose past work on the deadliness of smartphones on the roads has appeared on this website—reports on how the industry is trying to kill proposed nonbinding federal guidelines that urge industry players to develop disabling technologies that interfere with the phone functions of drivers but not their passengers.

Levin writes that the two major industry trade groups leading the charge against the guidelines have together spent more than $100 million on federal lobbying since 2010—while their 2,200 member companies have spent hundreds of millions more.

In a letter to Transportation Secretary Elaine Chao, Levin writes, one trade group, the Consumer Technology Association, characterized the proposed guidelines as a “dangerously expansive” assertion of federal authority that “could have a sweeping effect on the multibillion-dollar market for mobile devices and apps.”

The other group, the CTIA, has also gone to bat against legislation in Massachusetts and New Hampshire that seeks technological barriers to distracted driving. “This technology mandate cannot make a distinction between the person driving the vehicle and his or her passengers,” the group wrote in a 2015 letter to Massachusetts lawmakers obtained by FairWarning. “In fact, the mandate cannot distinguish between someone in a car versus a passenger traveling on a bus, by rail, in a taxi, or any other mode of transportation.”

But that’s not really true. Third-party text-blocking apps are available, and Apple, for one, holds the patent for a solution to the so-called passenger problem. “If you create the monster, you should have the duty to control it,” Gregory Love, a lawyer for families of people killed in distracted driving accidents, told Levin.

Levin also talked to developers of third-party blocking software who ran out of money while trying in vain to get smartphone makers interested in their products. One former Nokia development executive said he’d been “very enthusiastic” about getting Otter LLC’s software on the company’s phones, but his superiors demurred. “None of these companies are brave enough” to be the first, he said, “because they’re afraid of the consumer backlash.”