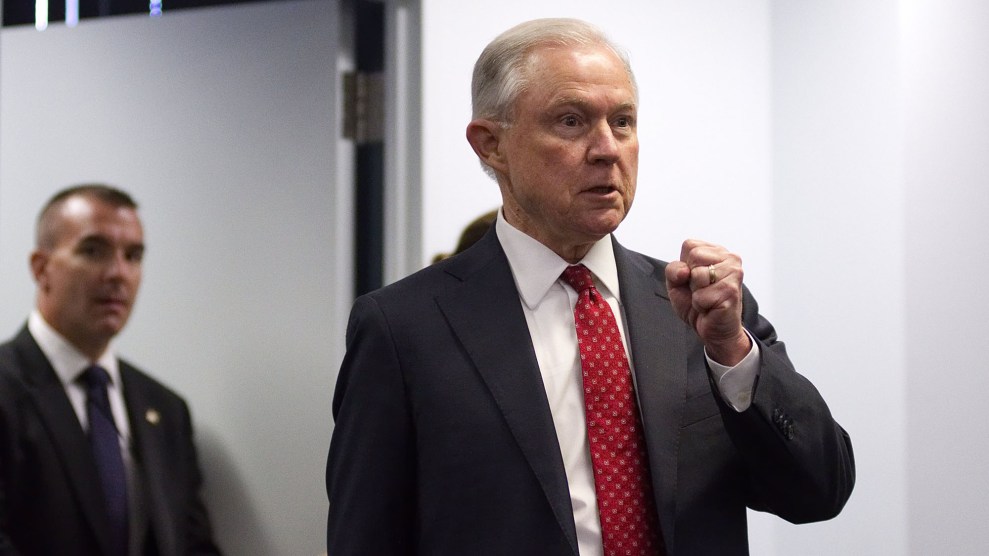 The city of Chicago is bringing some serious legal firepower to its lawsuit against Attorney General Jeff Sessions and his new policy of withholding Justice Department funding to places that don’t cooperate with federal immigration authorities.

Last month, Sessions announced that the Justice Department would deny a type of federal public safety grant to so-called sanctuary jurisdictions that withhold information about crime suspects from US Immigration and Customs Enforcement. On Monday, Chicago filed suit in federal court against Sessions, alleging that the new policy violates multiple provisions in the Constitution and federal law.

The complaint lists an impressive lineup of attorneys representing Chicago, including three who have served in or been nominated to top Justice Department roles in Democratic administrations. Among them is Jamie Gorelick, who served as the deputy attorney general, the No. 2 spot at the Justice Department, during the Clinton administration. Gorelick has been working on the other side of a White House fight, as the attorney leading Jared Kushner’s legal team in its response to the special counsel investigation into Russia’s interference in the 2016 election that has expanded to probe Kushner’s finances. She handed over much of that work to another attorney in July.

Also representing Chicago are David Ogden, who served as deputy attorney general in the Obama administration from 2009 to 2010, and Debo Adegbile, who worked for the NAACP Legal Defense and Education Fund and on the Senate Judiciary Committee. President Barack Obama nominated Adegbile to run the Justice Department’s Civil Rights Division, but Senate Republicans and a handful of Democrats rejected his nomination because he had written a brief arguing that there was racism in the jury selection process for the trial of a man who was convicted of killing a police officer. In December 2016, Obama appointed him to the US Commission on Civil Rights.

Gorelick, Ogden, and Adegbile all work for the high-powered law firm WilmerHale. Cities and states across the country have sued the Trump administration over a variety of policies, including its ban on travelers from certain majority-Muslim countries, but few if any have had a legal team with as much high-level government experience as this one.

Byrne-JAG grants, used to fund various law enforcement priorities, will no longer be available to sanctuary jurisdictions, Sessions announced last month. In Chicago, the city’s complaint states, these grants have helped the city purchase 1,000 vehicles for police officers since 2005 and allowed local nonprofits to provide “emergency shelter, food, and clothing; youth mentoring and structured activities in safe places; job training and placement; conflict resolution; and activities to strengthen community cohesion and resilience” in neighborhoods with high levels of violence.

Chicago’s lawsuit comes after two counties successfully blocked a January executive order by President Donald Trump that ordered the Justice Department to withhold funding from sanctuary jurisdictions. In that case, federal judge William Orrick temporarily blocked the order because, he determined, it is likely to be found unconstitutional. Orrick said that the order represents an executive power grab of Congress’ spending authority and thus “runs afoul” of the separation of powers delineated in the Constitution. He also found that the order likely violates the 10th Amendment right of local governments to set local policy free from federal coercion.

In that case, even the Justice Department’s lawyers acknowledged in court that the department’s ability to withhold federal funding from states and local governments is limited to a small number of grants. But Chicago, in its suit, argues that this grant shouldn’t be among them because it doesn’t pertain directly to immigration. In ruling on the suit, the courts may answer the question of how far Sessions’ Justice Department can go in its attempt to coerce sanctuary jurisdictions into cooperating with the Trump administration’s immigration policies.