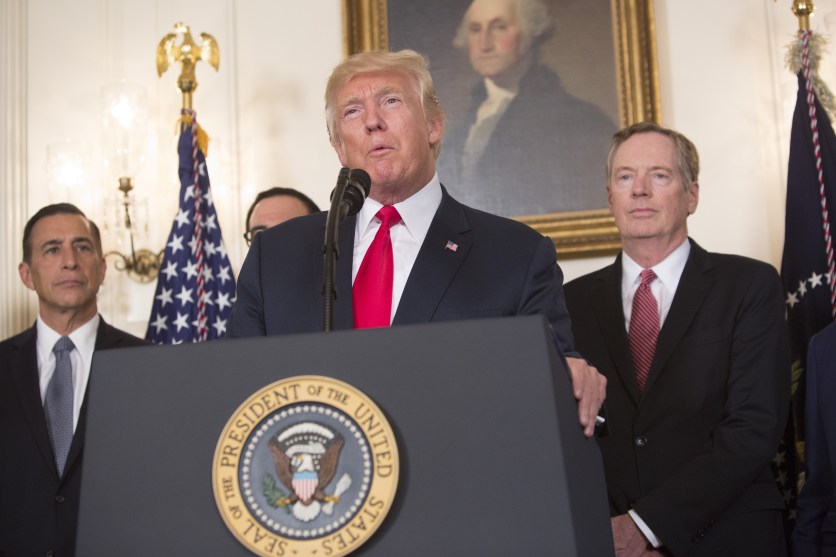 The Congressional Budget Office released yet another damning health care report on Tuesday that spells trouble for one of President Donald Trump’s proposals for Obamacare. The CBO says that if Trump follows through on his threats to tank Obamacare through executive action, premiums will jump an extra 20 percent next year and the federal deficit will grow by an additional $194 billion over the next decade. Trump’s actions, the report finds, would leave 5 percent of the country living in a place with no insurance option on the individual market.

The CBO looked at what would happen if Obamacare’s “cost-sharing reductions” (or CSRs) were no longer paid by the federal government. The policy forces insurance companies to lower the costs of deductibles and copays for low-income families, with the promise that the federal government will pay the insurance companies back for those discounted rates.

But since Trump took office earlier this year, he has continually threatened to cut those payments. That would leave insurance companies in a bind, since they would still have to keep rates lower for those consumers. In order to make up for the lost government money, the insurance companies would have to raise other prices. The CBO expects that premiums would immediately skyrocket for the standard “silver” plans on the individual markets, jumping 20 percent higher in 2018 than under current law and reaching 25 percent more than current projections by 2020. Even then, the cost of CSR reductions without government payments would be too much for some insurers, so the CBO predicts that 5 percent of the country would live in an area where no insurer has policies for sale in 2018.

The higher premiums wouldn’t actually be a problem for the majority of people who buy individual insurance. For people earning below 400 percent of the poverty line, the government offers subsidies, with the amount individuals pay in premiums capped as a percentage of their income. So the higher cost of premiums will fall largely on the government, which is why the CBO predicts that Trump’s strategy to tank Obamacare would raise the deficit by $194 billion over the next 10 years.