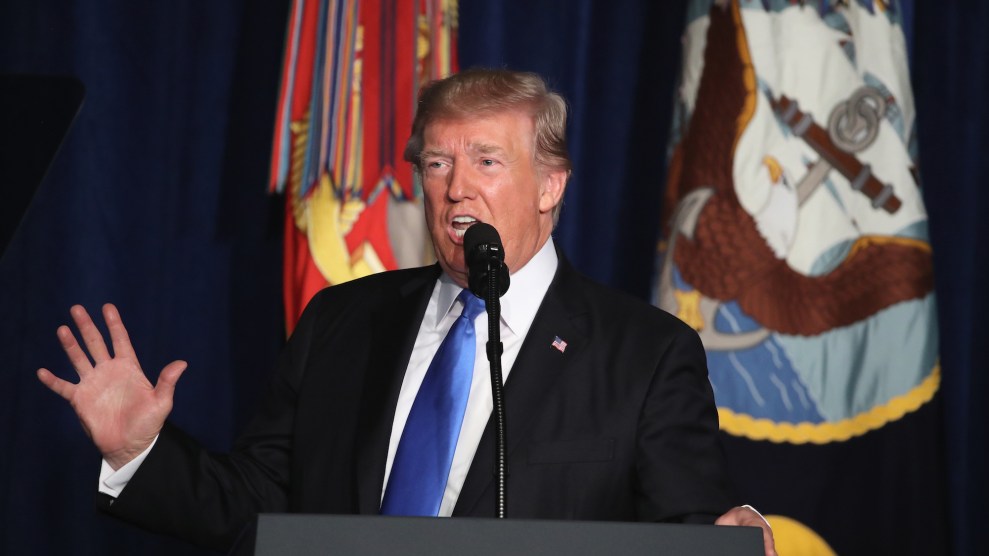 After President Donald Trump’s unhinged performance at a Phoenix rally on Tuesday night, former Director of National Intelligence James Clapper made a stunning statement: “I really question his ability to be—his fitness to be in this office.” Clapper, who is generally measured and nonpartisan, then said he was worried about Trump’s control of the US nuclear arsenal. “[If] in a fit of pique he decides to do something about Kim Jong Un, there’s actually very little to stop him,” he said. “The whole [nuclear weapons] system is built to ensure rapid response if necessary. So there’s very little in the way of controls over exercising a nuclear option, which is pretty damn scary.”

No senior intelligence community veteran has ever publicly questioned the mental health of a president and suggested the sitting commander-in-chief was too imbalanced to be trusted with the nuclear codes. Clapper’s remarks were a stark reminder that Trump does hold the ultimate power. At any given moment, for any given reason—or for no reason—the president of the United States can launch nuclear weapons and destroy much, if not all, of the planet and human civilization. “People don’t believe it when you tell them that the president can do this,” says Joe Cirincione, the president of the Ploughshares Fund and a nonproliferation expert. “Whenever he wants. For whatever reason he wants. They think that is just to crazy to be true. But it is true. We have a nuclear monarchy. It is most consequential act any president can take, and it is the least democratic process in our entire government.”

But is the world truly at the mercy of Trump and his psyche? Missiles do start flying immediately after the president gives the command, but is there no outside-the-box method of stopping an off-kilter president from impetuously waging nuclear war? Could Defense Secretary James Mattis block such an order? Could White House chief of staff John Kelly tell the military not to follow it?

Could the secretary of defense refuse to carry out a presidential order for a nuclear attack? The legal and constitutional aspects are not clear. The official doctrine that has been released says nothing about this question, and the cryptic public responses to official inquiries, even from Congress, indicate that it is not something that can be openly talked about. “Only the president can authorize the use of nuclear weapons” is essentially the only reply officials ever give to any questions about nuclear controls. Could the president simply fire the defense secretary and move on to the deputy secretary, the secretary of the Army and so on through the chain of command? Maybe. Such an action would at least slow things down, even if the refusal to carry out the order was illegal. But the secretary may not even be formally required to participate — U.S. Air Force doctrine does not indicate he is a necessary part of the chain of command, and holds that the president can communicate directly with the military, in the form of the Joint Chiefs of Staff, to order a nuclear strike.

Then there’s the question of whether commanders further down the line would implement launch orders. Wellerstein notes, “The launch officers are trained to launch weapons, not to debate the legality or advisability of the action…While nuclear launch officers are not meant to be strictly mechanical (and indeed, the United States has always resisted fully automating the process), if they stopped to question whether their authenticated orders were legitimate, they would put the credibility of US nuclear deterrence at risk.”

Recently, Bruce Blair, an expert on the command and control of nuclear weapons, also considered this question and said that he believed a presidential launch order would be accepted from top to bottom:

I believe the nuclear commanders at all levels would obey such an order, despite deep misgivings about its wisdom and legality. The military’s thorough subordination to civilian control and deeply ingrained attitude of deference to presidential direction; its well-greased and practiced protocols from top to bottom of the nuclear chain of command, geared to carry out his orders quickly (and to pressure a hesitant president to give the order)—as well as widespread ignorance among the rank and file about the dubious legality of striking first—leave little doubt in my mind that a presidential decision to strike a preventive blow, however misguided and reckless, would not be thwarted. It might be opposed strenuously by his advisers if they had a chance to weigh in, but in the end, they would acquiesce.

Cirincione points out that official protocol calls for Trump only to talk to the deputy director of operations in charge of the Military Command Center—the “war room” at the Pentagon—and the commander of the US Strategic Command. Neither can say no to an attack. As Vox notes, “The officers could try to convince the president not to launch an attack. They could resign on the spot in protest. Even if they did, though, they would most likely be replaced by officers willing to issue the command to strike.” Cirincione adds, “There is no legal requirement that the secretary of defense be included in the conference or the discussion [about launching nuclear weapons].” So Mattis might not even have the chance to weigh in. Possibly he would have no advance notice of a launch order.

There is the anecdote—often repeated—that during the last days of Richard Nixon’s presidency, when he was drinking heavily and despondent, then-Defense Secretary James Schlesinger instructed the military not to react immediately to any military orders from Nixon, especially those involving nuclear weapons. Schlesinger claimed he did this, but the historical record is not clear. And Mattis has no official ability to convey such instructions.

What about a more cinematic scenario? The president wants to send nuclear weapons flying for iffy reasons—and someone tries to physically prevent him from doing so. To initiate an attack, Trump would need access to the briefcase with the command codes. The “nuclear football,” as it’s called, is carried by a military officer who is always within the president’s presence. So what if Mattis or Kelly tells the football carrier to not provide the case to the president? Trump could order whoever tries that to be removed. And what if someone actually wrestled Trump to the ground to stop him from going through with a launch? Secret Service agents would, no doubt, intervene. Few Cabinet officials are a good match for the Secret Service.

Cirincione believes there’s not much that could stop a president from waging nuclear war beyond a “full-scale mutiny.” Before President Barack Obama left office, Cirincione called on him to remove US nuclear weapons from hair-alert status—meaning the president would not need to launch nuclear missiles at the first sign of an attack against the United States. Such a change would provide more time for deliberation within the process for launching nuclear missiles. But it would not fully address the issue of what to do when an unstable person possesses the means to go nuclear entirely on his own say-so.

Trump is an angry man obsessed with revenge and lacking knowledge about nuclear weapons. Yet now he has this end-it-all capability, and national security experts are worried, if not frightened. Anyone who enters the US military must swear an oath to defend the Constitution of the United States and to obey orders from the president and from officers. An unjustified nuclear strike certainly could threaten the existence of the United States (and, thus, the Constitution). So it’s not inconceivable that those two components of the oath could come into profound conflict. Then the survival of the world might depend upon the most unconventional form of civil disobedience.