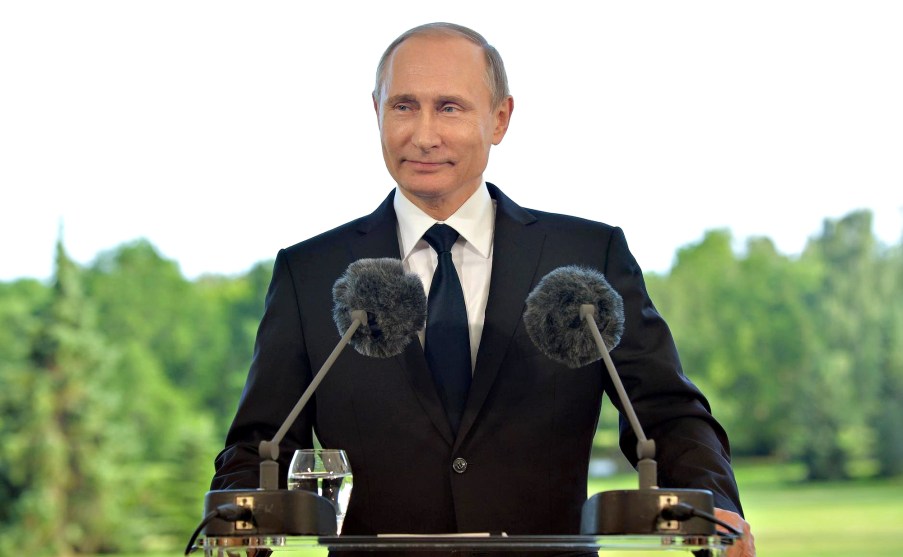 President Donald Trump goes into his first face-to-face meeting with Russian President Vladimir Putin at the G-20 summit on Friday at odds with much of the American foreign policy establishment. How it will turn out is anybody’s guess. On issue after issue, Trump leans toward what can only be described as Putin-friendly positions. The establishment has been trying to pull him back toward long-standing consensus.

Both leaders will likely give sanitized, summary versions of their private conversation, no doubt including their mutual desire to repair and improve US-Russian relations. We may never know for certain what will have been said between the two leaders in Hamburg, but the chances are Trump will at least to some degree pursue his own shoot-from-the-hip approach, even if most foreign policy experts think he’s veering off course.

Based on Trump’s effusive praise of Putin over the last year and a half, and the establishment’s heightened concerns about worrisome Russian actions, here’s what to watch for.

The Washington Post has editorialized that “Mr. Trump simply cannot fail to admonish Mr. Putin for Russia’s attempts to meddle in the 2016 presidential election. He must make clear the United States will not tolerate it, period.” But because the Russian meddling may well have helped his narrow electoral victory, Trump is not likely to do so—he has not condemned the interference, which Russia denies. The White House has made no indication that Trump will even raise the issue this week.

However, the shadow of ongoing investigations into Russian interference and possible collusion by the Trump campaign will make this the most closely watched matter. To say the issue never came up will be unacceptable to members of both parties in Congress. And both Trump and Putin are aware that further revelations are likely to keep coming out, despite their denials. Therefore, a possible public stance might be, “Yes, we did discuss this, although it never happened, and it will never happen again,” or some similar muddying of the waters. Such an approach would be in both of their interests, even if it’s at odds with reality.

Policy experts worry that Trump’s desire for warmer relations will result in some wins for Putin. As the Guardian reports, “Moscow’s immediate demand [is] the return of two Russian diplomatic compounds, in Maryland and New York, from where its officials were expelled by the Obama administration in December in retaliation over the Kremlin’s interference in the election campaign.”

Beyond the two Russian compounds, an even bigger worry would be any easing of sanctions against Russia for its annexation of Crimea in 2014, and its continued military interference there and in Syria. A rollback of US sanctions is clearly one of Moscow’s highest priorities.

It would not be easy for Trump to act unilaterally on this front, despite the White House signaling that it would like to do so. Any relaxation of sanctions would create a furious backlash in Washington, given congressional ownership of the matter and a recent US Senate vote of 98-2 to further strengthen sanctions against the Kremlin.

The War in Syria

For years, Russia has had a leading role propping up Syrian President Bashar al-Assad. Trump and Secretary of State Rex Tillerson have suggested that they may be fine with the role Russia is playing in Syria—and that the US focus is more on defeating the Islamic State. But any further conceding of Russian influence in Syria would not be welcomed by most US foreign policy experts.

The fact is, as the British Independent has reported, “Russia and the US are on opposite sides of the war.” There can be no easy concession as long as Russian officials threaten to shoot down US-led coalition planes flying in Syria, treating them as targets after the United States shot down a fighter jet belonging to the Syrian government.

The chances are high that both leaders will go out of their way to express their admiration for the other’s strong leadership. Putin is well aware that unadulterated praise is something Trump is known to crave. So expect expressions of friendship and a friendly desire for warmer relations.

Yet, even that dynamic will be fraught with risk: “If [Trump] smiles, if he wraps his arm around Putin, if he says, ‘I’m honored to meet you, we’re going to find a way forward’… I think Congress is going to react extremely negatively to that,” a former Obama national security aide told Reuters.

“Trump is like a horse with his front legs tied,” explained a German diplomat. “He can’t make any big leaps forward on Russia. If he tried people would immediately suspect it was all part of some big conspiracy.”

One of the least prepared American presidents—who dislikes detailed foreign policy analysis and likes to wing it with foreign leaders—will soon be sitting down with one of the most calculating and well-prepared Russian leaders, a former KGB agent. Putin is sure to know what he wants from the neophyte American president. No wonder so many foreign policy experts are alarmed at what may be about to happen.