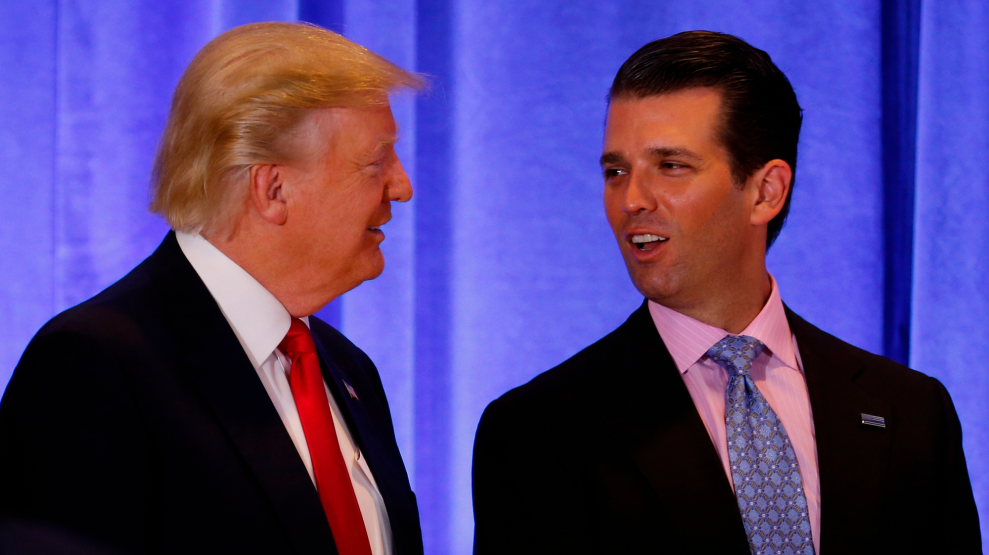 President Donald Trump praised his eldest son as a “high-quality person” and commended his “transparency” for releasing emails arranging a meeting with a Russian operative in hopes of receiving information damaging to Hillary Clinton.

Deputy White House press secretary Sarah Huckabee Sanders read this statement from the president during an off-camera briefing on Tuesday: “My son is a high-quality person and I applaud his transparency.” Sanders refused to answer any additional questions on the matter, referring reporters to Donald Trump Jr.’s legal counsel for further comments.

The statement marks the first response from the president on the mounting scandal, after the New York Times reported on emails showing Trump Jr. expressing interest in a meeting with a Russian lawyer who offered incriminating information related to Clinton as part of Russia’s effort to help his father’s candidacy.

Trump Jr. tweeted the contents of the emails himself on Tuesday, shortly after receiving word that the Times was set to publish the same emails on its website.

Julian Assange later tweeted that he had contacted Trump Jr. earlier that day in an attempt to encourage him to disclose the emails on the organization’s site. The claim immediately raised concerns of whether Trump associates are currently in close communications with the WikiLeaks founder.

Contacted Trump Jr this morning on why he should publish his emails (i.e with us). Two hours later, does it himself: https://t.co/FzCttGSyr6