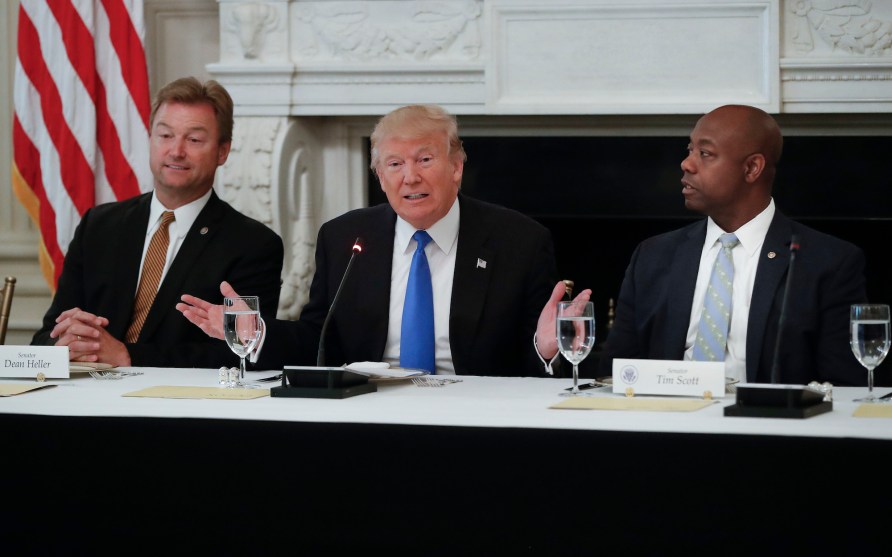 President Donald Trump on Wednesday demanded that Republican senators remain in Washington for the August recess until an agreement is reached on a plan to repeal and replace the Affordable Health Care.

“We can repeal, but we should repeal and replace, and we shouldn’t leave town until this is complete, until this bill is on my desk,” Trump said at a lunch meeting with senators at the White House. “Until we all go over to the Oval Office, I’ll sign it and we can celebrate for the American people.”

His return to a repeal-and-replace proposal marks the third position Trump has taken on health care this week, after initially calling for straight repeal on Monday and then a plan to intentionally allow the health care law to “fail on its own” the following day.

At one point during Wednesday’s meeting, Trump gestured to Sen. Dean Heller (R-Nev.), who was sitting next to him, and said, “Look, he wants to remain a senator, doesn’t he?” Heller is considered one of the most vulnerable senators up for reelection in 2018. After initially rejecting a version of the GOP health care bill, Heller has not committed to voting a particular way on proposals this week.

Trump added, “Any senator who votes against starting debate is really telling America that you’re fine with Obamacare.”

TRUMP to HELLER: "Look, he wants to remain a senator, doesn't he?" pic.twitter.com/LFiwuEY693

The president announced the meeting in a pair of tweets Wednesday, urging Republican senators to fulfill the party’s long-held promise to undo his predecessor’s signature health care law. After it became clear that the repeal-and-replace legislation did not have the votes for passage, Sen. Mitch McConnell (R-Ky.) announced on Tuesday he would introduce a proposal to dismantle Obamacare without a replacement plan. The measure is expected to fail, with three Republican senators—all of whom are women—quickly announcing they would oppose it from moving forward.

I will be having lunch at the White House today with Republican Senators concerning healthcare. They MUST keep their promise to America!

The Republicans never discuss how good their healthcare bill is, & it will get even better at lunchtime.The Dems scream death as OCare dies!