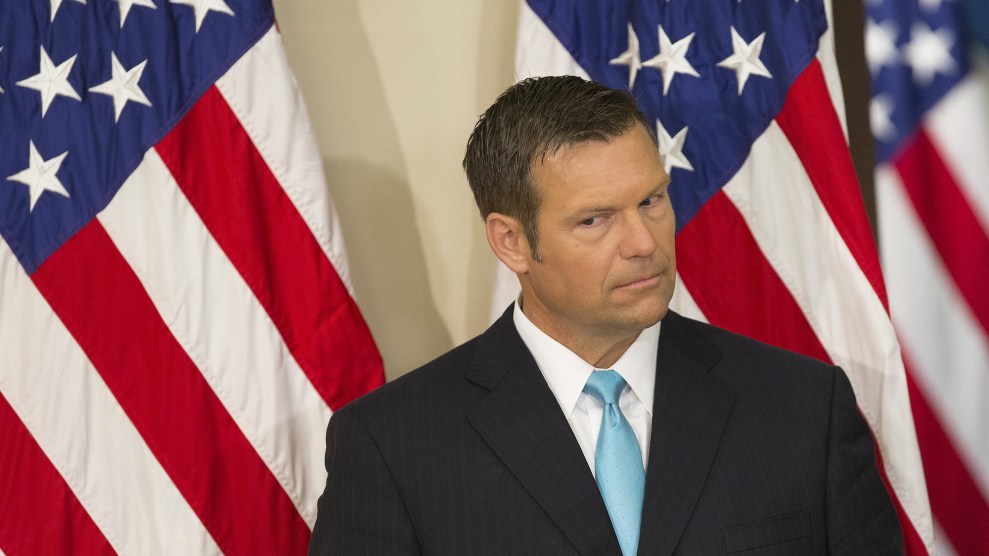 Kris Kobach attends the first meeting of the Trump election commission at the White House on July 19.Chris Kleponis/ZUMA

On June 28, when the vice chair of President Donald Trump’s election integrity commission sent a letter to all 50 states requesting sweeping voter data, he triggered a bipartisan rebellion, with not a single state providing all the data he was seeking. Now he’s trying again.

The initial request from Kansas Secretary of State Kris Kobach, a national crusader for tighter restrictions on voting, asked states to turn over voters’ personal information that included their Social Security numbers, party affiliation, military history, and criminal records. Twenty-one states refused to provide any data to the commission, according to the Brennan Center for Justice. The rest pledged to share only limited publicly available data. Not even Kobach’s home state provided all the data he wanted.

Seven federal lawsuits were filed against Kobach and the commission for violating privacy and ethics laws. But the mere threat of the Trump administration collecting such data led thousands of scared voters to remove themselves from the voter rolls in swing states like Colorado. Of the nearly 3,800 people who de-registered in Colorado, 85 percent were Democratic or unaffiliated voters.

Earlier this week, a federal court ruled that Kobach could proceed with his request for voter data because Trump’s commission was not an “agency” of the federal government and was exempt from undertaking a privacy impact assessment before collecting such data. On Wednesday, Kobach sent a second letter to all 50 states, once again asking them to turn over voter information to Trump’s commission.

Kobach wrote that “statistical conclusions [will be] drawn from the data,” prompting concern among voting rights advocates, given that the statistics Kobach uses to claim that voter fraud is widespread are almost always wrong.

Kobach is one of the only elected officials in the country who defends Trump’s debunked claim that millions voted illegally in the 2016 election. When asked by MSNBC’s Katy Tur following the first meeting of Trump’s commission if he believed Hillary Clinton won the popular vote, Kobach responded, “We may never know the answer to that.” Kobach has also claimed that up to 18,000 noncitizens are registered to vote in Kansas, although there is no evidence to support that claim.

Kobach: “We may never know” if Clinton won the popular vote. (We do know. She did. By about 3M votes. This is an astonishingly false claim.) pic.twitter.com/2gYqvVUCSa

Kobach administers a program called Interstate Crosscheck System to search for double voting. He calls it a model for the nation, but it has been found to produce false matches 99 percent of the time. Academics from Stanford, Harvard, Yale, and the University of Pennsylvania who studied Crosscheck found that “200 legitimate voters may be impeded from voting for every double vote stopped.”

Despite Kobach’s contention that “the Commission will approach all of its work without preconceived conclusions or prejudgments,” the unprecedented request for voter data and the track records of Kobach and other members of the commission have led to fears that Trump’s commission will make false claims about voter fraud in order to build support for policies like strict voter ID laws, voter purges, and new hurdles to voter registration. (Just this week, a federal court imposed sanctions on Kobach for “a pattern” of “misleading the Court about the facts and record.”) A day after the election, Kobach wrote to Trump’s transition team and said he was preparing legislation to amend the National Voter Registration Act to permit states to require documentary proof of citizenship for voter registration. In Kansas, that requirement has blocked 1 in 7 new voters from registering since 2013.

Kobach’s request for voter data has raised privacy concerns. Politico called the creation of a centralized government database of American voters a “gold mine for hackers.” When the commission received thousands of angry emails about Kobach’s request, it posted the letters on its website without redacting private information like emails, addresses, and phone numbers.

There are also concerns about what the Trump administration plans to do with the data. A spokesperson for Vice President Mike Pence, the commission’s chair, said the commission plans to run the voter data “through a number of different databases, looking for the possibility for areas where voter rolls could be strengthened.” But these government databases are not designed for that purpose, and the tools favored by Kobach, like Crosscheck, are notoriously unreliable.

Several election officials have already restated their opposition to Kobach’s new request. Kentucky Secretary of State Alison Grimes said in a statement, “The answer is again no…the compilation of every American voter’s information would build a national voter registration database, which is unnecessary to improving our elections, opposite our Constitution and state’s rights, and puts voters’ privacy and personal data at risk.” California Secretary of State Alex Padilla said in a statement, “The commission’s new request does nothing to address the fundamental problems with the commission’s illegitimate origins, questionable mission or the preconceived and harmful views on voting rights that many of its commissioners have advanced.”