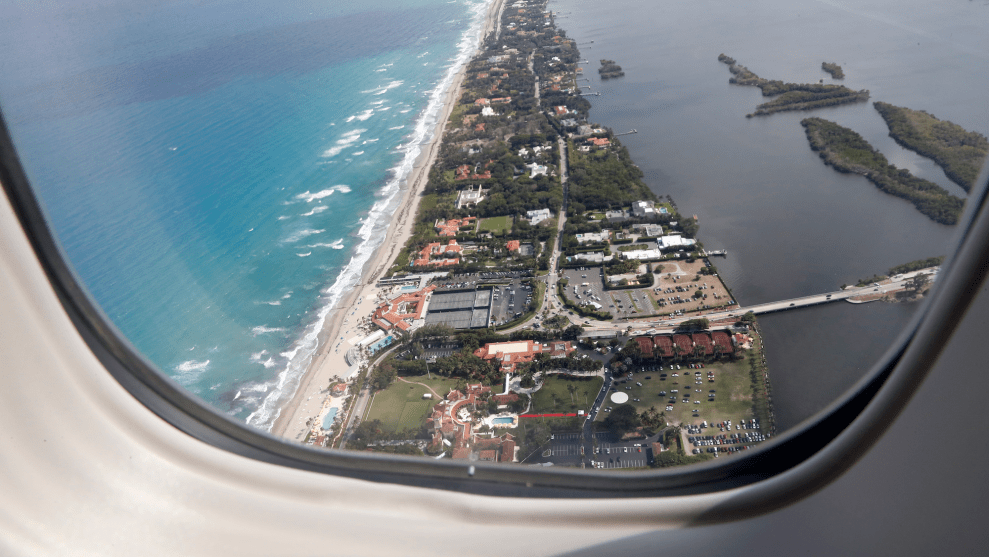 The President's Mar-a-Lago resort seen from the window of Air Force One.Alex Brandon/AP

By the time President Donald Trump kicked off “Made in America” week on Monday by climbing into a fire truck, a subtitle was already emerging for the week’s theme: “With the Help of Cheap Foreign Labor.”

Earlier on Monday, the Department of Homeland Security had announced that the United States would accept 15,000 additional foreign guest workers in seasonal industries like fishing and landscaping. The next day, a House committee quietly amended an appropriations bill to allow dairy and other year-round farmers to hire temporary workers—most of whom are from Mexico—for up to 10 months at a time. And at a hearing on Wednesday, House Republicans called for cutting protections designed to ensure that agricultural guest workers do not depress Americans’ wages when they come to the United States on temporary work visas.

Last week, the administration backed a bill introduced by Sens. Tom Cotton (R-Ark.) and David Perdue (R-Ga.) that would reduce legal immigration by half and prioritize high-skill immigrants. But none of their Republican colleagues have joined as cosponsors. Democrats are even less enthused. “Any attempt to gut legal immigration to the United States is dead on arrival in the United States Senate,” said Sen. Dick Durbin (D-Ill.) in a statement. “These efforts are nothing more than a partisan ploy appealing to the nativist instincts and xenophobia that marred the last election.”

In the White House, the Washington Post reports, senior policy adviser Stephen Miller and top Trump strategist Steve Bannon are spearheading the administration’s anti-immigration efforts. Miller is pushing to end protections for undocumented immigrants who came to the United States as children, known as Dreamers, after the stalled DREAM Act that would spare them from deportation. So far, he has been successful. A White House official told McClatchy that Trump is likely to oppose a new bipartisan effort to pass the DREAM Act.

But when it comes to temporary foreign labor, the party’s business wing is showing that it can still get things done, much to the chagrin of Breitbart, the right-wing news site that Bannon used to chair. Earlier this month, Sen. Thom Tillis (R-N.C.) blocked a Senate vote on a Department of Homeland Security nominee, saying he wouldn’t allow the vote unless the administration increased the number of H-2B visas, which are given to foreign guest workers in lower-skill industries like hotel housekeeping.

The Building Trades Unions, which represents a wide range of construction and craft workers, said in May that expanding the H-2B program would run “directly counter to Trump’s recent executive actions to ‘buy American and hire American.’” In April, Trump told Building Trades members that they were “fantastic” and “incredible” and that he would protect their jobs “by protecting our borders.” But on Monday, DHS announced that it would increase the annual number of H-2B visas, which are valid for up to a year, from 66,000 to 81,000.

H-2A visas are similar to H-2B visas but are used exclusively for seasonal agricultural work and can’t be applied to year-round jobs like dairy farming. On Tuesday, a House committee voted to scrap that protection, aiming to make make the visas available for year-round work in order to address what Rep. Dan Newhouse (R-Wash.) called a “critical lack of workers” in agriculture. The amended bill still needs to be passed by the full House and Senate and signed by Trump to become law.

Labor advocates argued that expanding the H-2A program would hurt American workers. Bruce Goldstein, the president of Farmworker Justice, said in a statement, “Agricultural employers with year-round jobs should do what any other employer must do to attract and retain workers: improve wages and working conditions.”

On Wednesday, Republicans on another House committee called for a more fundamental overhaul of the H-2A program. Currently, temporary farm workers must be paid the “prevailing wage” for local farm work, which is more than $13 per hour in some states. Rep. Bob Goodlatte (R-Va.) called that rate “artificially inflated.” Getting rid of it would disadvantage American workers by allowing farmers to hire guest workers at below-market wages.

None of this is what Trump’s more nationalist advisers had in mind during the campaign. At a June 2016 hearing on H-2B labor, then-Sen. Jeff Sessions (R-Ala.), a steadfast Trump surrogate who became his attorney general, criticized “special interests” for demanding foreign workers who were “easy to exploit” and “much easier to replace.” Their loyalty, he suggested, was not to American workers, but to their bottom line.

But for all criticism of the foreign work visas by Trump’s team, Trump’s own family hasn’t hesitated to use them. Trump’s son Eric drew attention earlier this year for hiring H-2A workers to staff Trump Winery in Virginia. Donald Trump has used hundreds of workers on H-2B visas at his Florida Mar-a-Lago resort. And on Thursday, BuzzFeed reported that Mar-a-Lago is requesting permission from the Department of Labor to hire 70 more H-2B workers: 35 servers, 20 cooks, and 15 housekeepers. Last year, Trump’s resort was unable to find American housekeepers willing to work for $10.17 an hour. This time around, Mar-a-Lago is offering an additional 16 cents per hour.