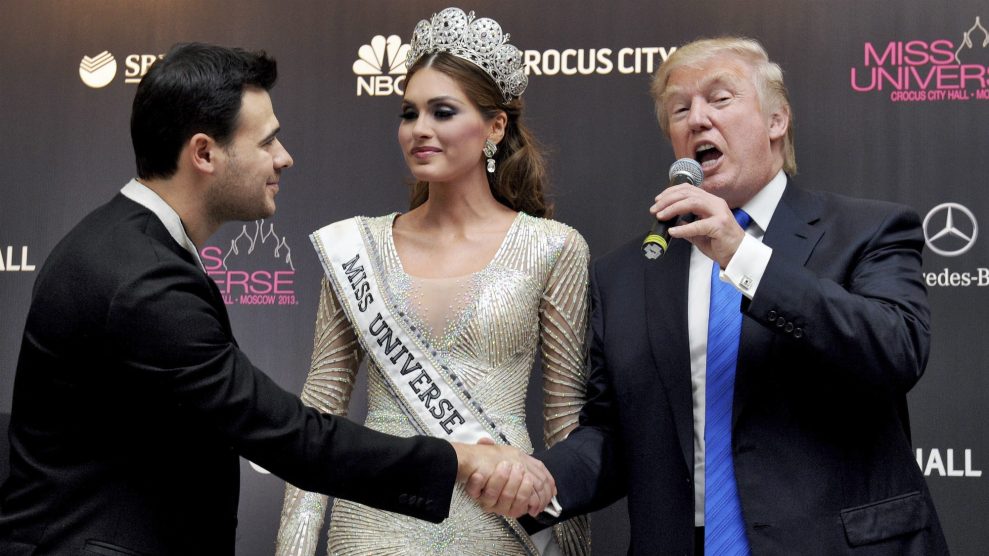 In 2000, an investigation spearheaded by then-Sen. Carl Levin identified Russian businessman Ike Kaveladze as a “poster child” for the practice of establishing anonymous US shell corporations that could be used to launder “ill-gotten gains,” according to the Michigan Democrat. Documents obtained as part of that probe into possible money laundering show that Kaveladze’s main client at the time was Crocus International, a company headed by Aras Agalarov, who in 2013 partnered with Donald Trump to bring the Miss Universe contest to Moscow.

On Monday, Levin, a onetime chairman of the Senate’s Permanent Subcommittee on Investigations who left Congress in 2015, sent a letter to special counsel Robert Mueller and the Republican and Democratic leaders of the Senate intelligence committee highlighting the probe (titled “Possible Money Laundering by U.S. Corporations Formed for Russian Entities”), which was undertaken at his request by the General Accounting Office (now known as the Government Accountability Office, or GAO). That investigation, which found concerning bank practices but no criminal wrongdoing, revealed Kaveladze’s role in helping circulate more than a billion dollars from Eastern Europe and Russia through US bank accounts. The Russian businessman, who has lived in the United States since the early 1990s, was identified last week as one of the attendees of a June 2016 Trump Tower meeting between Trump’s top advisers—including Donald Trump Jr., Trump’s son-in-law Jared Kushner, and then-campaign chairman Paul Manafort—and a Kremlin-tied lawyer who they were told had damaging information concerning Hillary Clinton. That meeting was arranged on behalf of Agalarov and his son, Emin, an aspiring pop singer and executive vice president of Crocus Group, of which Crocus International is an affiliate. Kaveladze, now a Crocus International vice president based in California, attended this session as a translator, according to a lawyer for the Agalarovs.

In the 1990s, Kaveladze ran a business called International Business Creations, which established more than 2,000 Delaware-based shell companies and several hundred bank accounts on behalf of anonymous Russian clients. Between 1991 and 2000, these US accounts received $1.4 billion in cash from Russia and Eastern Europe—cash that often left the accounts almost as soon as it arrived.

Citibank was among the banking institutions where Kaveladze had opened dozens of accounts. In a letter to GAO investigators in 2000, the company noted that between 1991 and 2000 Kaveladze had opened or referred 136 accounts to the bank. “We have detected no illegal activity in the Kaveladze-related accounts, all of which are now closed,” wrote CitiGroup’s general counsel, Michael Ross. “However, the number of accounts he opened or referred and the volume and type of activity in these accounts were not adequately understood at the time, even though Citibank’s policies met or exceeded industry standards throughout the period that Mr. Kaveladze was a customer and referral source.”

In his letter, Ross stated that Aras Agalarov’s company, Crocus International, was “IBC’s primary client.” Ross identified Agalarov’s firm as “a legitimate shoe distributor in Russia that formerly employed Mr. Kaveladze.” Agalarov has come a long way from there. The Azerbaijan-born businessman is now a billionaire developer on friendly terms with Vladimir Putin, who in 2013, not long after Trump’s Miss Universe pageant was held in Moscow, awarded Agalarov a prestigious award for his service to the Russian Federation.

Kaveladze and an attorney representing the Agalarovs did not respond to inquiries.

According to Ross’ letter, Kaveladze had first aroused the suspicions of Citibank compliance officials when he asked the bank to supply a speaker for a conference he was helping organize called “Offshore Strategies ’95.” Held in Miami—a city that is now home to a thriving community of Russian emigres—the conference focused on how to help wealthy Russians move money offshore, including by investing in American real estate. A Russian news article promoting the event noted that Comtek International, a company which was at least part-owned by Aras Agalarov, was sponsoring the conference.

The conference spurred Citibank officials to conduct what they called a “Know Your Customer” review of International Business Creations’ account activity. According to Ross, this review “found no problems with the IBC accounts.” Still, Ross acknowledged that the bank could not identify the source of any of the cash that tumbled through the accounts Kaveladze opened.

The GAO, which faulted US banks for their lax practices in vetting their customers and did not accuse Kaveladze of any wrongdoing, concluded, “It is relatively easy for foreign individuals or entities to hide their identities while forming shell corporations that can be used for the purpose of laundering money.”

During his years in the Senate, Levin, now a senior counsel at the law firm Honigman, crusaded against tax avoidance schemes and what he described as “the hidden ownership of American corporations.” He said in a statement last week that “Kaveladze’s conduct…helped us reinvigorate the requirement that banks know the true owner of their accounts, a policy that hadn’t been enforced over the years. It has recently been required by regulation.”

In his letter to Mueller and Sens. Richard Burr and Mark Warner, the chairman and vice chairman of the Senate intelligence committee, respectively, Levin left some bread crumbs for investigators to follow as they probe possible collusion between the Russian government and Trump’s presidential campaign. He noted that the Permanent Subcommittee on Investigations (PSI) had subpoenaed wire transfer records for accounts set up by Kaveladze and that these records are still available.

The full letter from Citibank to GAO investigators can be read here: