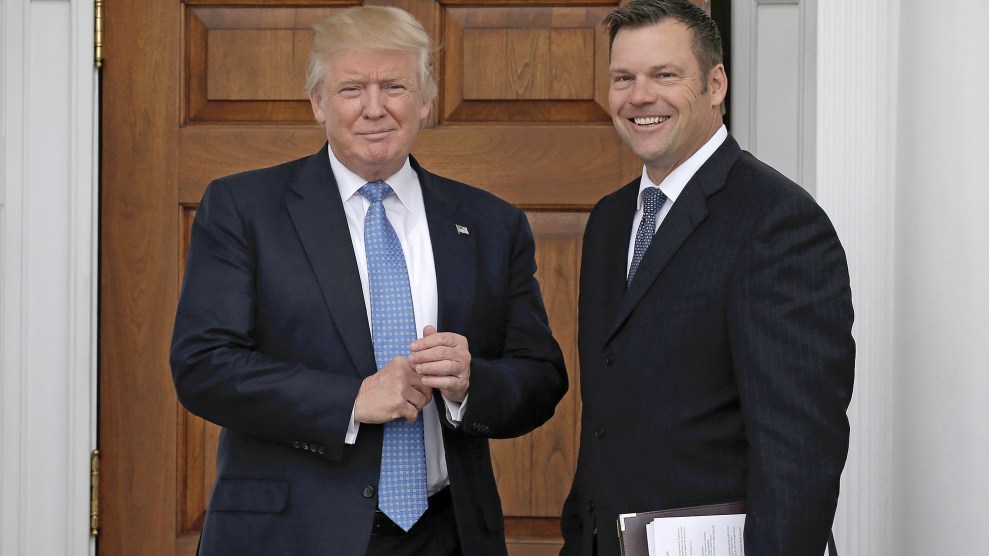 A federal judge has found that Kansas Secretary of State Kris Kobach, the vice chairman of President Donald Trump’s election integrity commission, has a “pattern” of providing misleading statements in court. The admonition came in an opinion on Tuesday evening upholding a lower court’s decision to sanction Kobach for misleading the court in an ongoing voting rights case.

Kobach gained a national reputation by crafting anti-immigration laws for states like Arizona and Alabama. Today he is known for making claims of widespread voter fraud, despite evidence that it is very rare. Alongside Vice President Mike Pence, he is leading Trump’s election commission, where he is expected to advocate for policies that make it more difficult for people to register to vote and easier for election officials to purge people from voter rolls. The commission is facing multiple lawsuits from civil rights groups for allegedly failing to meet federal requirements that the commission be transparent and have a balance of viewpoints among its members.

US District Court Judge Julie Robinson began her strongly worded ruling by quoting a lower court judge, US Magistrate Judge James O’Hara, who had ruled against Kobach: “When any lawyer takes an unsupportable position in a simple matter such as this, it hurts his or her credibility when the court considers arguments on much more complex and nuanced matters.” Robinson then listed other instances in which she believes Kobach made statements or took positions in court “that have called his credibility into question.” Finally, she noted that this pattern “gives further credence to Judge O’Hara’s conclusion that a sanctions award is necessary to deter defense counsel in this case from misleading the Court about the facts and record in the future.”

The ruling is part of lawsuit over a Kansas law that requires proof of citizenship in order to register to vote. The American Civil Liberties Union sued Kobach last year, alleging that the requirement violates the National Voter Registration Act (NVRA), a 1993 law aimed at helping people register to vote. Kobach, a defender of the proof-of-citizenship requirement, chose to represent himself in the suit.

Shortly after the presidential election, Kobach was photographed with President-elect Donald Trump holding a memo proposing changes to the NVRA. Back in Kansas, the ACLU sought that memo and a similar document, arguing that they were relevant to the case. O’Hara ultimately agreed, and Kobach turned them over, though they remain unavailable to the public. After Kobach produced the documents, O’Hara found that Kobach had misled the court about the documents, for which he sanctioned Kobach and fined him $1,000. “[D]efendant’s deceptive conduct and lack of candor warrant the imposition of sanctions,” O’Hara wrote in his June 23 decision.

Kobach fought the sanction, arguing that “the lack of clarity was a mistake compounded by last minute editing, made in good faith.” But the editing excuse was itself raised at the last minute, not in Kobach’s initial brief opposing the sanction, and was therefore unconvincing. When O’Hara upheld the sanction, Kobach appealed to Robinson. But on Thursday, Robinson denied his request to reconsider and upheld the sanction. “Indeed, [Kobach’s] assertion in this motion for review that his editing explanation was fairly raised before Judge O’Hara in the first instance is precipitously close to unsupportable,” Robinson observed.