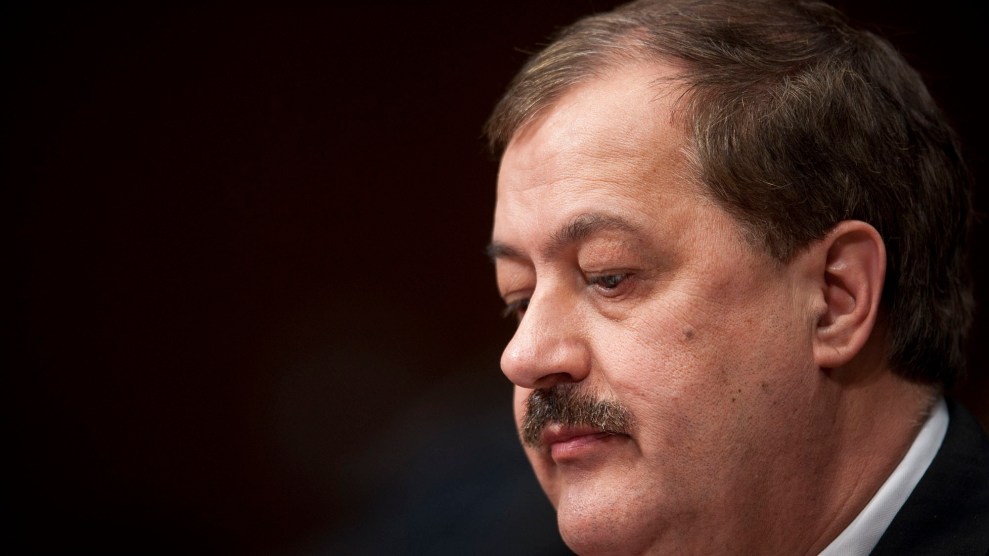 Fresh off a one-year stint in federal prison, disgraced former coal baron Don Blankenship just might run for Senate. The former Massey Energy CEO and conservative mega-donor was convicted last year of conspiring to commit mine safety violations in the run-up to the deadly 2010 explosion at West Virginia’s Upper Big Branch mine, which killed 29 people.

In an interview with a West Virginia radio show on Wednesday, Blankenship said running as a Republican against Democratic Sen. Joe Manchin, who is up for reelection next year, was a “possibility.”

“If I could get some momentum, some help, I might have a chance at winning a Republican primary, particularly,” he said. “I assume Joe Manchin would love to see me get in the race because he would probably think I would be more easily beatable than the others.”

Before he was forced from his perch at Massey (with an $86 million golden parachute), Blankenship was a towering figure in West Virginia politics, giving millions to help build the Republican Party in the state and infamously throwing his weight around in judicial elections. As I wrote in a 2015 profile of Blankenship:

The irony is that, even at the nadir of Blankenship’s power, his ideology is ascendant. He transformed West Virginia not just physically (entire towns have been wiped out by Massey’s footprint), but politically. Now, by playing off fears of creeping government involvement, the coal industry has strengthened its grip on state politics. Lawmakers friendly to the industry, with financial support from Blankenship, have won sweeping victories at the ballot box and used their mandate to roll back health and safety regulations while trumpeting the survival-of-the-fittest capitalism that was Blankenship’s gospel. The man on the mountaintop may have fallen, but the widespread impact of his legacy shows no signs of diminishing.

When Hillary Clinton came to Mingo County, West Virginia, in 2016, Blankenship was spotted in the crowd of protesters who showed up to jeer. He may have lost his power, but the politics he stood for remained ascendant.

Manchin is among the most vulnerable Democratic incumbents heading into 2018. No state swung as sharply toward Donald Trump last fall as West Virginia, and although Manchin has assembled a conservative voting record—he was the only Democrat to support Jeff Sessions’ nomination for attorney general and famously filmed an ad in which he shot the cap-and-trade climate bill—reelection is likely to be an uphill battle. He has already drawn two tough Republican challengers in Rep. Evan Jenkins and the state’s attorney general, Patrick Morrisey. (He also has a Democratic primary opponent, Paula Jean Swearengen.)

But Blankenship, as even he seems to acknowledge, might makes things a lot easier for Manchin were he to win the primary. Although he was ultimately tried in the southern district of West Virginia, not far from the Upper Big Branch site, before his 2016 trial, Blankenship’s lawyers sought to have the proceedings relocated as far away as Baltimore, Maryland, arguing that his name was so toxic in his home state that it would be impossible to find an impartial jury.

Further complicating his potential candidacy in West Virginia is the fact that his lawyers argued in legal filings before the trial that Blankenship had moved to Las Vegas. After leaving prison, he told another interviewer he was considering entering the real-estate business in Nevada.