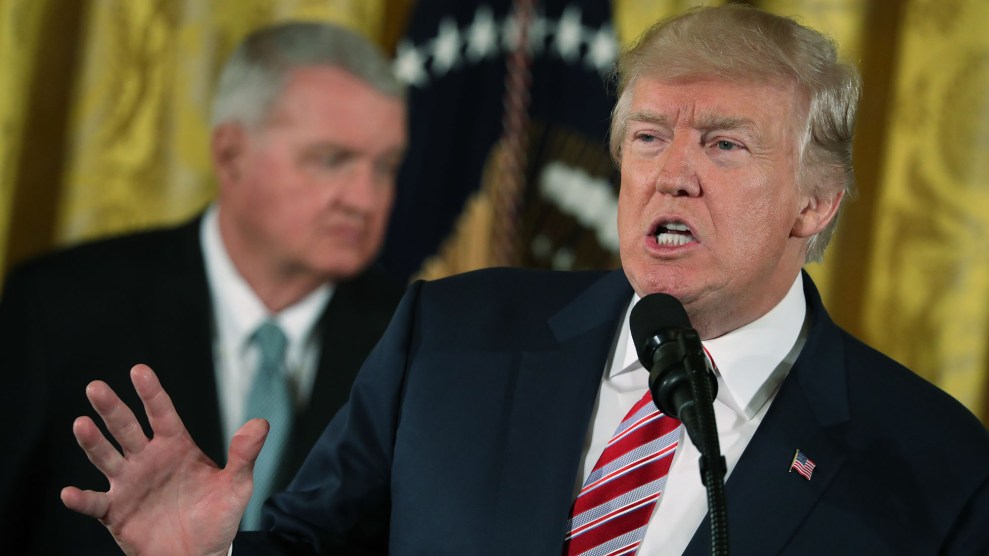 President Donald Trump began the week with a barrage of early-morning tweets blasting the courts for blocking his travel ban executive order. But in doing so, he may have just made it more likely that the courts will keep blocking the ban.

People, the lawyers and the courts can call it whatever they want, but I am calling it what we need and what it is, a TRAVEL BAN!

The Justice Dept. should have stayed with the original Travel Ban, not the watered down, politically correct version they submitted to S.C.

The Justice Dept. should ask for an expedited hearing of the watered down Travel Ban before the Supreme Court – & seek much tougher version!

In any event we are EXTREME VETTING people coming into the U.S. in order to help keep our country safe. The courts are slow and political!

These tweets followed upon several from over the weekend about the ban and the terrorist attack in London, including this one from Saturday evening:

We need to be smart, vigilant and tough. We need the courts to give us back our rights. We need the Travel Ban as an extra level of safety!

In January, Trump signed an executive order banning nationals from seven Muslim-majority countries from entering the United States for 90 days, as well as halting the refugee resettlement program for 120 days (and indefinitely for Syrian refugees). When the courts blocked it, rather than appeal to the Supreme Court, Trump signed a modified version of the order. The new ban repealed the old one, reduced the number of banned countries from seven to six, and added exceptions and waivers. Still, federal courts in Maryland and Hawaii blocked it, and now the Justice Department has appealed to the Supreme Court to have this second version of the ban reinstated.

The biggest question in the litigation over the ban is whether the courts should focus solely on the text of the order or also consider Trump’s comments from the campaign trail, and even during his presidency, to determine whether the order uses national security as a pretext for banning Muslims from the country. The president’s lawyers argue that the courts should focus on the text of the order and defer to the president’s authority over national security. Trump’s tweets Monday morning and over the weekend make it harder for the courts to justify doing that.

The travel ban is supposed to be a temporary remedy until the government can review its vetting procedures. But Trump’s tweets make it appear that the ban itself is his goal. Trump repeatedly and defiantly uses the word “ban” when his administration has instead sought to call it a pause.

The tweets “undermine the government’s best argument—that courts ought not look beyond the four corners of the Executive Order itself,” Stephen Vladeck, an expert on national security and constitutional law at the University of Texas School of Law, says via email. “Whether or not then-Candidate Trump’s statements should matter (a point on which reasonable folks will likely continue to disagree), the more President Trump says while the litigation is ongoing tending to suggest that the Order is pretextual, the harder it is to convince even sympathetic judges and justices that only the text of the Order matters.” And once the courts start looking at the president’s statements, it’s not hard to find ones that raise questions about anti-Muslim motivations.

Even the president’s allies acknowledge his tweets are a problem. George Conway, the husband of top Trump adviser Kellyanne Conway, responded to Trump on Twitter by pointing out that the work of the Office of the Solicitor General—which is defending the travel ban in court—just got harder.

These tweets may make some ppl feel better, but they certainly won’t help OSG get 5 votes in SCOTUS, which is what actually matters. Sad. https://t.co/zVhcyfm8Hr

Conway, who recently withdrew his name from consideration for a post at the Justice Department, then followed up to clarify his position.

2) … and of course, my wonderful wife. Which is why I said what I said this morning. Every sensible lawyer in WHCO and every political …

3) … appointee at DOJ wd agree with me (as some have already told me). The pt cannot be stressed enough that tweets on legal matters …

4) … seriously undermine Admin agenda and POTUS–and those who support him, as I do, need to reinforce that pt and not be shy about it.

Trump may soon see his tweets used against him in court. Omar Jadwat, the ACLU attorney who argued the case before the 4th Circuit Court of Appeals, told the Washington Post this morning that the ACLU’s legal team is considering adding Trump’s tweets to its arguments before the Supreme Court. “The tweets really undermine the factual narrative that the president’s lawyers have been trying to put forth, which is that regardless of what the president has actually said in the past, the second ban is kosher if you look at it entirely on its own terms,” Jadwat told the Post.