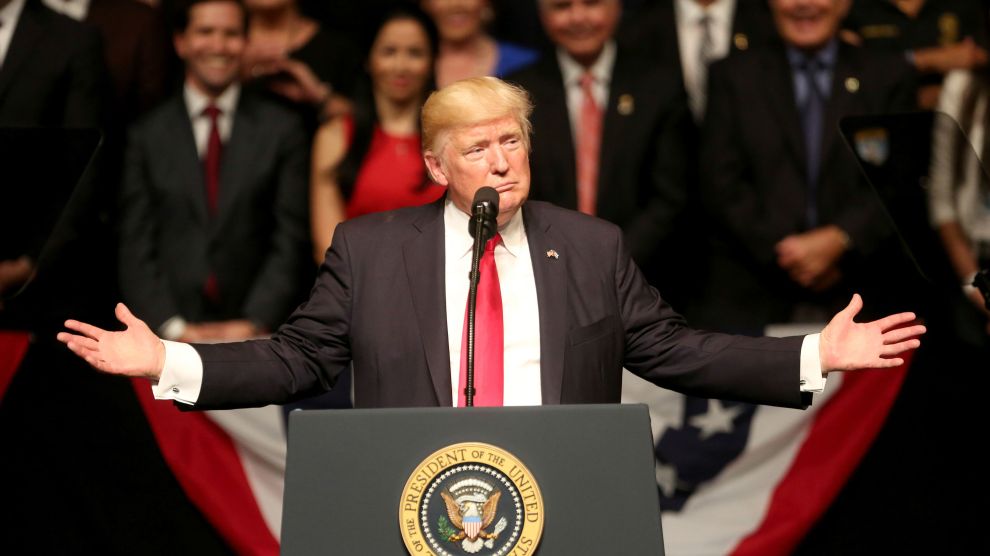 As we like to say around here, what’s troubling about President Trump’s finances isn’t so much what he owns, but what he owes.

On Friday, the nonpartisan Office of Government Ethics released Trump’s 2017 personal financial disclosure form, a helpful but hardly exhaustive accounting of the president’s vast holdings—income, assets, and liabilities. The document covers the period from January 2016 to April 2017. On the income side, it shows that Trump’s Washington hotel had a strong year, pulling in about $20 million. His Mar-a-Lago resort, meanwhile, reported $7.5 million more in income for the president than reported on last year’s disclosure. A tally by the New York Times found that 20 of Trump’s most high-profile resorts and golf clubs took in $360 million over that time, slightly more than the $350 million he reported last year.

On the liabilities side of the ledger, there is something new to be found. According to the 2017 disclosure, Trump refinanced a mortgage worth between $5 million and $25 million that he had with the Swiss bank UBS for the Trump International Hotel and Tower near Central Park. The entity that refinanced the UBS loan was Ladder Capital Finance, a small, somewhat obscure outfit that isn’t a bank at all, but rather what’s known as a real estate investment trust or REIT. Ladder Capital’s refinancing appears to have been a sweet deal for the president: According to the disclosure, the refinancing lowered the mortgage’s interest rate by a sizable two points, to 4 percent from 6.2 percent.

Ladder Capital is the president’s second-largest lender. It holds the notes on Trump properties at 40 Wall Street, Trump Tower, Trump Plaza, and now the Trump International Hotel and Tower. According to Crain’s New York Business, Ladder has extended Trump $275 million in loans in recent years, providing much-needed capital at a time when most major banks deemed Trump too risky to do business with. Ladder was founded almost a decade ago by Brian Harris, a former UBS executive for commercial real estate (which may help explain the refinancing connection).

As an REIT, Ladder Capital is less transparent than, say, a publicly-traded bank like JPMorgan Chase or Bank of America. We do, however, know that late last year Ladder Capital reportedly looked into the possibility of selling itself to another institution, blaming onerous federal regulations on the business of repackaging and selling loans. That raises important questions about what happens when one of Ladder’s biggest debtors is also the nation’s chief executive who oversees—and might push to change—those very regulations.