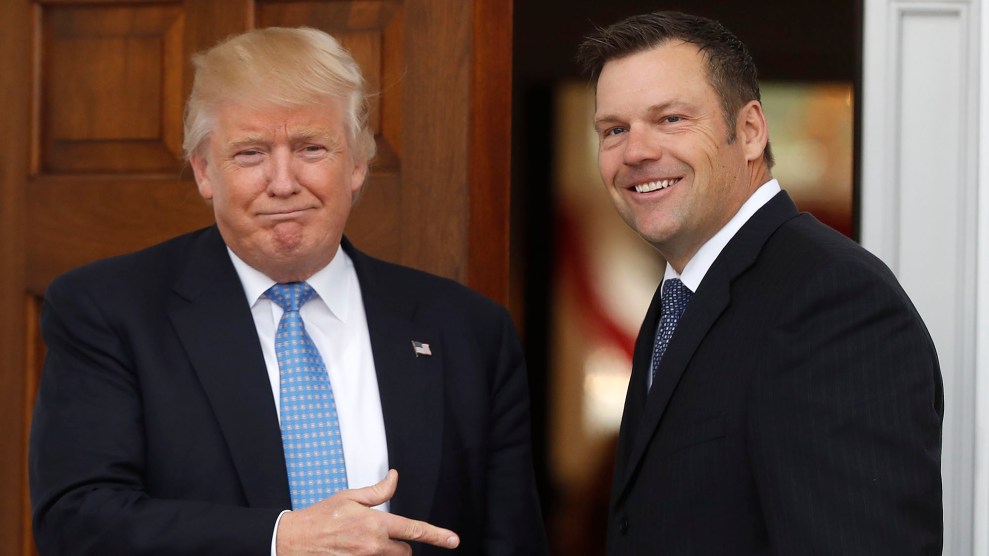 President Donald Trump’s new election commission is seeking sensitive personal data on every registered voter in the country—including names, birth dates, party affiliations, and partial Social Security numbers—without any explanation for how it will be used or what security measures are being taken. To voting rights advocates and election experts, the move amplifies fears that the commission’s work will be used to suppress voting, particularly among minorities and other groups that lean Democratic.

After notoriously (and falsely) insisting in January that as many as 5 million fraudulent ballots were cast in the 2016 election, Trump created the Presidential Advisory Commission on Election Integrity last month to study vulnerabilities in the election system and provide recommendations for fixing them. The commission is led by Vice President Mike Pence and vice-chaired by Kansas Secretary of State Kris Kobach, who has a national reputation for pushing the myth of widespread voter fraud and erecting hurdles to registering to vote.

On Wednesday, Pence announced that the commission had sent letters to all 50 states “requesting publicly available data from state voter rolls.” That prompted immediate concern among voting rights advocates, which was heightened when one of the letters, sent to Connecticut, was published online, revealing alarming details about the extent of the information the commission wanted.

“This is the Trump administration creating a government database that hasn’t existed before, and it’s one that asks for voters’ political parties,” says Jason Kander, former Missouri secretary of state and chairman of a group of Democrats created by the Democratic National Committee to speak out against Trump’s election commission. “It looks more and more like they’re going to target certain voters who aren’t going to vote for them.”

The requests, sent by Kobach, demanded a long list of items. The Connecticut letter requests, “if publicly available under the laws of your state, the full first and last names of all registrants, middle names or initials if available, addresses, dates of birth, political party (if recorded in your state), last four digits of social security number if available, voter history (elections voted in) from 2006 onward, active/inactive status, cancelled status, information regarding any felony convictions, information regarding military status, and overseas citizen information.'” Rather than keep this data under lock and key, Kobach’s letter says he will make it publicly available.

“Pence and Kobach are laying the groundwork for voter suppression, plain & simple,” Vanita Gupta, who ran the Civil Rights Division of the Justice Department during the Obama administration and now heads the Leadership Conference on Civil and Human Rights, tweeted Thursday. In a follow-up statement, she added, “The integrity of our elections is indeed under assault—just not in the way Trump claims.”

There are multiple layers of concern about the collection of this data by the president’s commission. For the secretaries of state, it’s not entirely clear whether they will be legally liable for misuse of people’s private information if they hand over the requested data. For voters, the data presents a real threat because it makes private information that was closely guarded by the state available to anyone with an internet connection.

Politically, there is the issue of how the data will be used and what policies the commission will recommend as a result. After Trump suggested that 3 million to 5 million people voted illegally and then floated the idea of the commission in the first weeks of his presidency, voting rights groups feared it would be used to suppress the vote among poor and minority voters, potentially using tighter voter ID laws, new barriers to registering, and voter roll purges.

The data will be handled by employees in the executive office of the president, who serve as the commission’s staff. “No one should trust the likely shoddy data analysis of this commission headed by people with a track record for not being accurate about the prevalence of voter fraud, working for a President who has made wildly unsupported allegations of voter fraud,” election expert Rick Hasen of the University of California-Irvine School of Law wrote on his blog Thursday.

Election experts immediately noted that the data likely to be collected by the commission will result in flawed analyses. Because federal law prohibits election officials from removing names from the rolls without specific indications that they are no longer eligible, there will inevitably be ineligible voters on the rolls—people who have recently moved, for example—a fact that could be exploited to make voter rolls appear error-riddled. And because state laws differ on how this information can be disseminated, the data won’t be uniform from state to state.

“He’s not going to be able to compare apples to apples and oranges to oranges because he’s not going to have the same data from every state,” says Myrna Pérez, an expert on voting rights and election administration at the left-leaning Brennan Center for Justice. David Becker, executive director of the Center for Election Innovation & Research, a nonprofit that studies election administration, notes that without this sensitive data—which many states will likely to be unwilling or legally unable to turn over—any analysis will be virtually meaningless. “So a choice must be made—either collect enough data, including sensitive data, to make the analysis useful (which requires a comprehensive security plan), or get virtually no utility from the data whatsoever,” Becker wrote Thursday. Kobach and his team have opted to go with publicly available data that Pérez says will result in “junk science.” The commission’s decision to compile a flawed data set causes voting rights advocates to worry that its members already know the policies they intend to push, such as photo ID requirements to vote, proof of citizenship to register, or increasing voter list purges.

Some states have laws that restrict how voter data can be shared, so secretaries of state could face legal repercussions if they follow the administration’s request and hand over voters’ sensitive information. There are good reasons for those laws: With all this data made public, for example, a person could look up nearby Democratic voters, track them down with their addresses, and harass them or intimidate them from voting. A business could use the data to market products to people registered with a certain political party, even though some state laws prohibit using voter data for commercial purposes.

And now that Russia has interfered in US elections and is likely to try to do so again, it’s risky to make the entire nation’s voter data public. “It’s just shocking,” says Pérez, that “in a period where we know that there’s a risk that we have foreign interference and foreign attacks on our registration systems, that somebody thinks it’s a good idea to take the voter registration rolls in all 50 states and put them all together in one place.”

This list will continue to grow, but it’s unlikely to stop Kobach and the commission from getting enough data to issue a report to Trump. As Michael McDonald, an election expert at the University of Florida, predicted on Twitter, enough states will send in enough information that “Kobach can apply sloppy matching algorithms to (erroneously) claim lots of double voting and noncitizen voting.” Those findings, he continued, “will be used by Republicans to justify roll back of federal voting rights protections,” and “states will follow.”