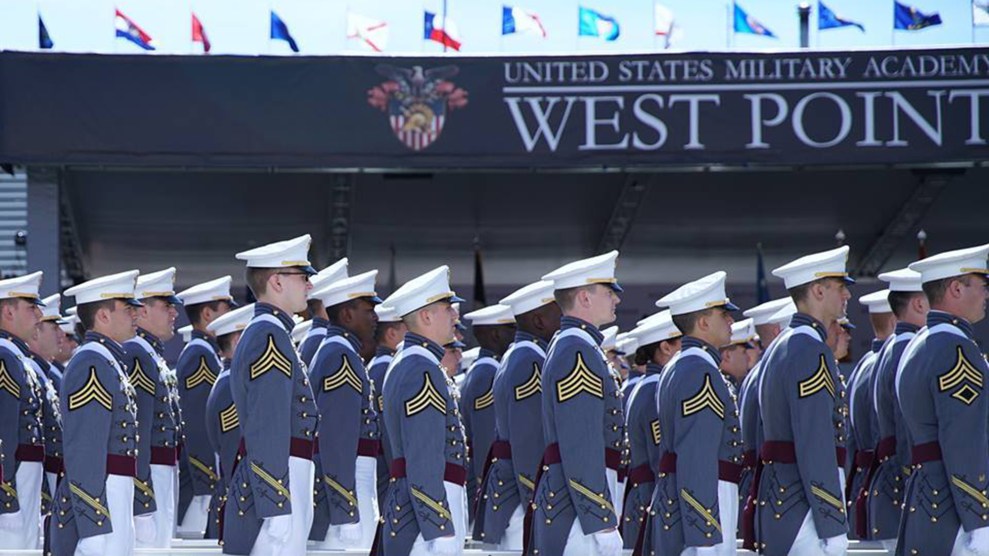 When 22-year-old Riley Dosh returned for her senior year at West Point last August, she knew it was time to spill a secret. The Army cadet had recently realized she was transgender, and she no longer identified with the male pronouns she’d used since birth. “At West Point, cadets do not lie or steal or tolerate those who do,” she says of the military academy’s honor code. “I didn’t want to lie about who I was.”

It seemed like a good moment for honesty. Two months earlier, in June 2016, the Pentagon had announced that for the first time, trans people would be allowed to serve openly in the armed forces. Service members across the military started to come out as transgender, and at the end of her first semester, so did Dosh.

But when her graduation rolled around in May, there was a problem: Though active-duty troops could now be openly transgender, the military had decided not to accept new trans recruits until July 2017. After four grueling years of training, Dosh was told she could not become an officer like the rest of her class. “It seemed unreal,” she says. “If I had hid it until just after graduation, I would have been allowed to commission.” A trans graduate of the Air Force Academy was also blocked from becoming an officer.

Then, some more bad news: The Pentagon was supposed to start welcoming new trans troops on July 1, but recent reports have suggested there will be a delay under President Donald Trump, who last year said it was “ridiculous” for trans soldiers to serve openly. Earlier this month, Army and Marine Corps leaders requested a delay of up to two years, in part over concerns that trans people with medical needs might be less deployable. Last week, the chiefs of four service branches decided to ask instead for a delay of six months to study what types of changes might be necessary to accommodate new trans soldiers. With the original July 1 deadline approaching, “no decision has been made,” chief Pentagon spokeswoman Dana White said on Friday.

A delay in the recruitment policy could affect all types of recruits—cadets who want to commission as officers, for example, as well as people who skip the service academies and seek to enlist as soldiers. And there are more of them than you might expect: While the country’s trans population is relatively small, trans people are twice as likely as other Americans to serve in the military. Right now, “in order to get in, they have to lie about who they are,” says Brynn Tannehill, a 42-year-old former Navy Pilot who is trans and left the service after struggling with gender dysphoria.

“In order to get in, they have to lie about who they are,” says a former Navy Pilot.

At service academies, a lag in the policy could force some cadets to stay in the closet. One of them, a trans man at West Point, has kept his gender identity hidden because he doesn’t want to risk his shot at becoming an officer. “First and foremost, I want to be the best leader I can be,” he says, asking to remain anonymous because he’s only out to family and close friends. At school, he’s had to present as a woman and live with a female roommate, and he hasn’t been able to get medical care like hormone therapy. He says he knows at least one other cadet at West Point who’s still in the closet too.

Several more cadets at other military academies have reportedly come out over the past year. The shifting recruitment policy might threaten their bid to become officers—a scary prospect after sacrificing so much to reach that goal. “You know all those stories about having fun in college? Well, they don’t happen in the academy,” Tannehill says. Service academies start with basic training, which is known as “Beast Barracks” at West Point: Often on little sleep, cadets complete demanding physical exercises and follow a long list of rules—in the dining hall, they’re required to stare at a crest on their plates and count the number of times they chew before swallowing. They balance strenuous military duties with their classes, and then spend the summer training in troop leadership, small-unit tactics, and weapons. “You are deliberately making your life a living hell for four years to become an officer,” Tannehill says. “At the end, for that all to have been a moot point—that’s terrible.”

When Dosh found out she couldn’t commission, she was invited to apply for a civilian job with the Department of Defense, but at the moment she’s not interested. “I’d rather be an officer,” she says. “No disrespect to civil service, but cadets train to defend our country in uniform,” Sue Fulton, a member of the LGBT military group SPARTA, says. “It’s like if you spent three years at law school and at they end they said, ‘You can’t be a lawyer, but you’re more than welcome to go into a business profession.'”

“No disrespect to civil service, but cadets train to defend our country in uniform.”

If the Pentagon does start welcoming trans recruits, there’s a chance Dosh can apply again to commission, according to a spokeswoman at West Point. (A spokesman for the Pentagon said “it would depend how the policy is rolled out.”) For now, Dosh is living in Texas with her girlfriend, who’s stationed with the Army at Fort Hood, and waiting for the Pentagon to clarify its rules.

In the meantime, Dosh is starting her gender transition. After she came out her senior year, her commanders were supportive, she says, but the academy required her to keep adhering to male grooming standards. Now she’s finally able to grow her hair out, wear some makeup, and begin hormone therapy. “It’s a massive relief.” Still, the uncertainty about her career is disheartening. “I don’t feel like I have any control over what the Department of Defense is going to decide for me,” she says. “There’s nothing I can do about that but just sit and wait.”