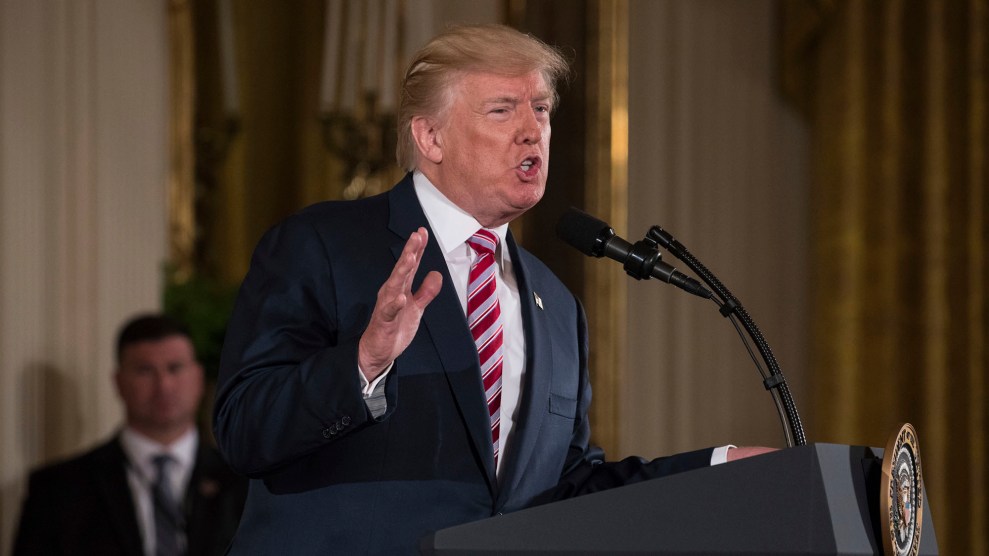 Cheriss May, Sipa via AP

As President Donald Trump’s travel ban awaits judgment by the Supreme Court, its prospects have been undermined by the administration itself, which has largely abandoned the main justification for the ban in the first place.

It’s a fact obscured by the president’s tweets and the administration’s talking points and legal strategy, but the White House’s principal argument for the temporary ban was to give the government time to conduct a review of its visa evaluation procedures. That this review has fallen by the wayside over the past several months raises serious questions about whether the review is actually the point of the ban. If the Supreme Court see holes in this justification, it’s less likely to reinstate the ban that has so far been consistently blocked by lower courts.

On his seventh day on the job, Trump signed the first version of his travel ban, an executive order barring nationals of seven Muslim-majority countries from entering the United States for 90 days and halting the refugee resettlement program for 120 days. After a federal court in Washington state blocked some of its provisions and the 9th Circuit Court of Appeals upheld that ruling, Trump signed a revised version of the ban on March 6.

In both orders, the logic for the ban was clear: to allow the federal government to marshal all necessary resources to conduct an internal review of visa vetting procedures and issue a report to the president. As the second ban, the one now pending before the Supreme Court, states (emphasis added):

To temporarily reduce investigative burdens on relevant agencies during the review period described in subsection (a) of this section, to ensure the proper review and maximum utilization of available resources for the screening and vetting of foreign nationals, to ensure that adequate standards are established to prevent infiltration by foreign terrorists, and in light of the national security concerns referenced in section 1 of this order, I hereby proclaim…that the unrestricted entry into the United States of nationals of Iran, Libya, Somalia, Sudan, Syria, and Yemen would be detrimental to the interests of the United States.  I therefore direct that the entry into the United States of nationals of those six countries be suspended for 90 days from the effective date of this order…

But the government does not appear to have prioritized the review. Leah Litman, a professor at the University of California, Irvine School of Law, says the internal review laid out in the first executive order was never blocked by the courts and therefore should have begun in January and continued until the second order was signed in March. But there’s no evidence that the review, to be led by the secretary of homeland security, ever got off the ground.

The second order, Litman notes, rescinded the entire first order, including the review portion. The president could have opted not to interrupt the review. He could even have gone back and changed the second order if he later became aware that it had disturbed the review process. None of this appears to have happened.

After Trump signed the second order, federal judges in Maryland and Hawaii blocked portions of it from going into effect. The Maryland judge blocked only the provision barring people from six majority-Muslim countries—down from seven in the first ban—from entering the United States. But the Hawaii judge blocked the entry ban, the hold on the refugee program, and the review process.

If the review were truly the purpose of the ban, the government’s legal briefs would presumably have shown alarm at the fact that the judge stopped the review. Yet those briefs seem to have relegated the review to a second-tier priority. Marty Lederman, a former Justice Department official who reviewed the government’s legal response in a post on the blog Just Security, found that the government was far more upset that the judge blocked the entry ban than the review, even though the decision to block the review was a greater legal intrusion into everyday management of the executive branch. “The Administration’s relatively nonchalant treatment of the ‘screening and vetting protocols and procedures’ review process, and the Hawaii judge’s injunction of that process—in contrast with the urgency with which it is insisting upon expedited review of the purportedly ‘temporary’ entry ban—is yet further evidence that the entry ban is not, in fact, a mere stop-gap,” he wrote, adding that “it is, from the President’s perspective, the big kahuna itself.”

In the administration’s petitions to the Supreme Court, Litman observed, “a lot of the briefing is dedicated to this idea that suspending this entry ban is itself what harms national security, not the idea that they need the entry ban to allow them to conduct the internal review procedures, as was sort of the representation at the outset.”

Whether the administration cares about a review may seem technical, but it matters in court. The legal arguments over the travel ban come down to one question: Should the courts consider just the text of the executive order to determine its constitutionality, or should they look beyond the text and examine Trump’s statements, as a candidate and as president, to determine whether the administration is using national security as a pretext for discriminating against Muslims? The government, of course, wants the judges to stick to the text. The groups opposing the ban, led by the American Civil Liberties Union, want the courts to consider the context.

But if the logic in the text itself has ceased to make sense, the justices will have little choice but to look outside the order to determine the president’s true rationale for the ban.