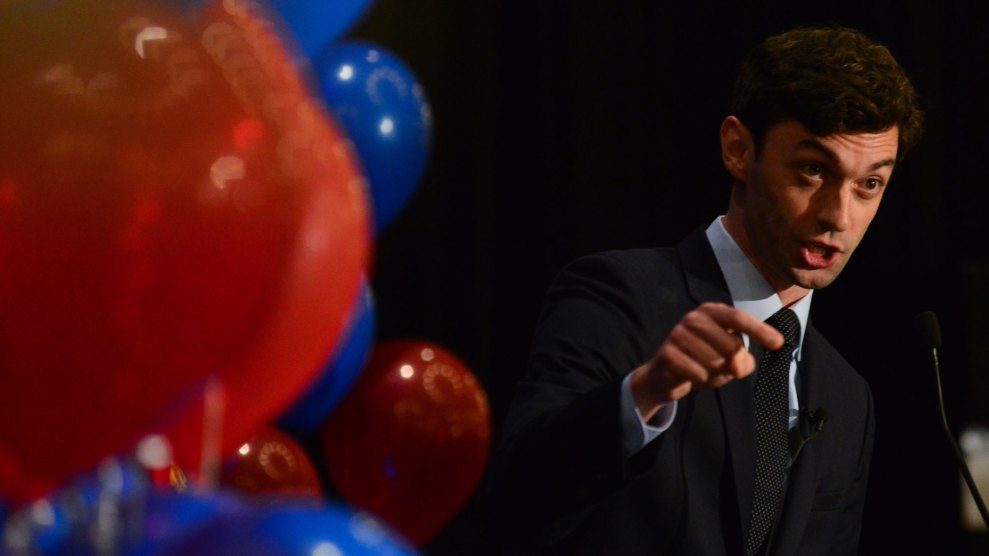 The Atlanta Journal-Constitution dropped a new poll of the most expensive special congressional election in history, and it is good news for Democrat Jon Ossoff and liberals across the country who have placed inordinately high stakes on Georgia’s 6th District just six months after a Republican cruised to reelection there by 23 points. According to the AJC, Ossoff leads Republican Karen Handel by 7 points, 51 to 44, which is outside the margin of error. Another poll released Thursday showed Ossoff with a 3-point lead, 50 to 47.

The election is still 11 days away, but early voting began a week and a half ago and is proceeding at a rapid clip that is almost on par with the early-voting turnout of the 2016 presidential election.

An Ossoff win wouldn’t make much of a dent in the Republican majority in the House, and after raising $23 million (a record for a House candidate who is not self-funding), he’d likely to have to raise a ton of money again as a top Republican target in 18 months. But Democrats have latched onto the seat, previously held by Secretary of Health and Human Services Tom Price (and, years earlier, Newt Gingrich), as a way to make a major statement months into President Donald Trump’s term. Hillary Clinton nearly carried the district during her presidential campaign, and the Democrats’ strategy for retaking the House hinges on replicating that success—not just in Georgia’s 6th but in similar affluent suburban districts in California, Kansas, Texas, and elsewhere. An Ossoff win would be a strong signal that they can, and it would hand an energized grassroots a badly needed breakthrough.

Republican criticism of Ossoff has mostly focused on personal issues, such as his youth, his support from national Democrats, a brief stint making documentaries for Al Jazeera, and, bizarrely, a video of a college-age Ossoff dressed as Han Solo. To the disappointment of some on the party’s left flank, Ossoff has run openly as a moderate; he told reporters recently that he opposed a single-payer health care plan (which is fast becoming the party’s new standard) and in a historically conservative district has focused on issues like cutting government waste and promoting the tech industry.

But one big progressive plank he has adopted—support for a living wage—produced one of the campaign’s signature moments. At a debate on Monday, Ossoff and Handel were asked if they supported raising the minimum wage to a “livable wage.” (The questioner did not specify an amount, but the most common figure thrown out by proponents is $15 an hour.) Ossoff said yes. Handel very much did not.

“This is an example of the fundamental difference between a liberal and a conservative: I do not support a livable wage,” she said. “What I support is making sure that we have an economy that is robust with low taxes and less regulation.”

Meanwhile, Democrats seem encouraged enough by Ossoff’s performance in the suburbs north of Atlanta to have recently added another suburban Georgia seat to their target list next year: the 7th District, currently represented by Republican Rob Woodall. This week, Woodall got his first Democratic opponent.