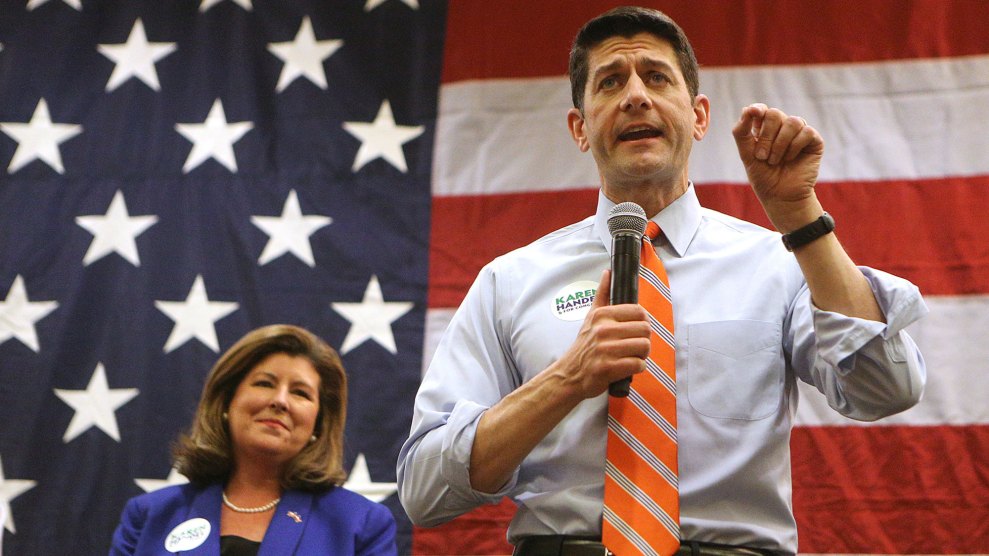 When the campaign to fill the Georgia congressional seat vacated by Health and Human Services Secretary Tom Price began this winter, Michael Flynn was still national security adviser, Donald Trump was not under investigation, and the American Health Care Act was just a glimmer in Paul Ryan’s eye. Those were simpler times. On Tuesday, 23 weeks after Democrat Jon Ossoff declared his candidacy, and two months after the first round of voting sent Ossoff and Republican Karen Handel into a runoff, Georgia voters will go to the polls for a second time to pick a winner.

The race, in a district Hillary Clinton narrowly lost in November, quickly took on national significance because it represented Democrats’ best chance yet at flipping a House district in the Trump era. But that early interest from anxious Democrats across the country has turned the race from an interesting temperature-taking exercise into a ridiculous arms race that looks nothing like any special election ever. Ossoff has raised more money than any House candidate in history, and the $51 million spent by candidates and the committees backing them is also a record, not just for a special election, but for any House race.

In a sense, the special election became too big to fail.

Special elections as a rule are a strange kind of canary that only rarely carry deeper messages for the nation. (Remember David Curson? No, you don’t—he was the last Democrat to win a special election in a seat previously held by a Republican, in 2012.) A notable exception was Scott Brown. When the barn-jacket-wearing Republican state senator won a special election to the Senate in Massachusetts in 2010, he exposed a lethargy in the Democratic base and cost the party their supermajority in the Senate at a time when the chamber was struggling to finish off a health care bill inspired by the man Brown replaced, Ted Kennedy.

Flipping the seat formerly belonging to Price, an intellectual godfather of Trumpcare, would also carry a  symbolic punch. But in an immediate sense the stakes for Tuesday are much lower. If Ossoff wins, House Democrats would go from being in the minority by 24 seats to being in the minority by 23 seats. It doesn’t change the calculus for Democrats working to take back the House either—the 2018 campaign for GA-06 will begin almost as soon as the winner is certified, and it very well could mean that Republican nominee Karen Handel and Ossoff have to run against each other again. Maybe next time they can just have a lightsaber duel.

You’ve heard the expression that hard cases make bad law? The Georgia election is an awkward road map for future House races precisely because it’s been such an expensive slugfest. Virtually nothing that happens next year will look anything like it, and the circumstances in which the race exploded into the national spotlight—and had that electoral spotlight nearly all to itself—are unique. The election took on an unusual amount of import among “Resistance”-minded Democrats simply because it came on their radar at a moment when they were most desperate for a victory, early in the void between the inauguration and the off-year elections this fall. Every setback in Washington only added to Democrats’ anxieties, which in turn compounded their interest in the race. In a sense, the special election became too big to fail.

Still, we can glean something from the way the race played out. Democrats decided, at least for now, that their best shot in this disproportionately upper-class, college-educated, historically conservative district—previously represented by Newt Gingrich and Tom Price—was to run a post-partisan campaign. Ossoff, a 30-year-old documentary filmmaker, has focused on entrepreneurship, cutting government waste, tech innovation, and generic national security, and he has sought to paint his opponent as a spendthrift who is in politics for herself. He is part Aaron Sorkin character and part Third Way policy paper.

Notably, Republicans decided that their best shot at holding a historically conservative district previously represented by Gingrich and Price was to avoid any of the political discussions roiling Washington. Price’s would-be Republican successor never mentions Obamacare in ads and has instead focused on Ossoff as a phenomenon of the “Resistance.” Republican ads featured Kathy Griffin and bad caricatures of San Francisco lefties; a piece of literature handed out by canvassers this weekend depicted Ossoff hitching a ride to Washington with Nancy Pelosi. They aren’t even trying too hard to paint Ossoff as a liberal—just highlighting that liberals like him.

The big story of the $51 million race is not who wins or loses on Tuesday, but rather that it happened at all. After November, the conservative suburban districts Hillary Clinton carried (or nearly carried) were a riddle: Were they a product of Trump’s unique unpopularity, or did they represent real opportunities for Democrats down-ballot? Ossoff’s performance in the first round of balloting, where he finished just shy of the 50 percent threshold needed to win outright, already went a long way toward answering that question, and his incredible fundraising haul and vast national support will only encourage other Democrats, from California to Texas, to follow his path. Already, candidates are lining up to run against vulnerable Republicans in similar districts, and rank-and-file Democrats are dropping millions of dollars into escrow accounts for whichever candidates make it out of the primary.

Barring a major polling error, Ossoff will have likely outperformed Clinton in the district and far surpassed previous Democratic showings against Price. That would continue a pattern in previous—far less expensive—special elections in Kansas and Montana, and in a larger sample of state legislative races. Almost every race so far, expensive or not, tells a similar story: Democrats are doing much better in Republican districts now than they did last fall.

That’s the lesson; the rest is noise.

Courtesy of our friends at Decision Desk HQ, you can get the results live as they come in soon after the polls close at 7 p.m E.T.D.