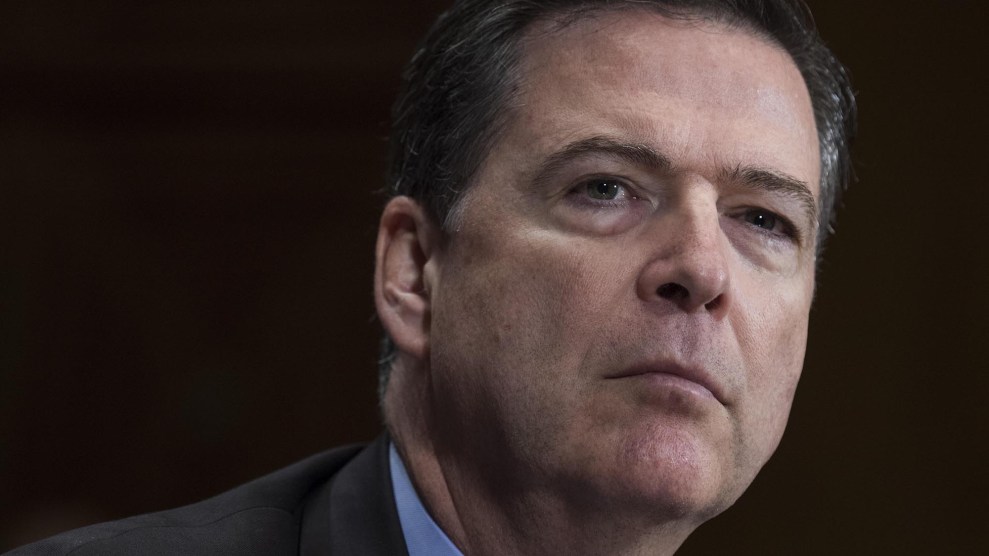 The Senate Intelligence Committee on Wednesday released the opening remarks that former FBI Director James Comey submitted ahead of his highly anticipated Thursday appearance before the committee. The dramatic statement backs up reports that President Donald Trump asked Comey for “loyalty” and requested that he drop any investigation into former national security adviser Michael Flynn’s statements to the bureau. It also corroborates a series of high-profile stories published by the New York Times.

Trump fired Comey last month and has made statements suggesting that the firing was partly linked to Comey’s handling of the investigation into possible collusion between Trump associates and Russia during the 2016 election. Benjamin Wittes, a friend of Comey’s and a senior fellow at the Brookings Institution, called Comey’s statement “the most shocking single document compiled about the official conduct of the public duties of any president since the release of the Watergate tapes.”

The early release of Comey’s testimony was unexpected. The former FBI chief “wanted this out a day in advance, with the goal of getting the entire complex narrative out for both the public and the committee,” a person familiar with Comey’s thinking tells Mother Jones.

Here are some key takeaways from Comey’s statement:

Comey says Trump asked him to drop any investigation into whether Flynn lied to the FBI. Comey writes that after a February 14 meeting between Trump and several high-ranking national security officials, the president asked to speak to Comey alone. “I want to talk about Mike Flynn,” the president said, according to Comey. Flynn had been fired that day for lying to Vice President Mike Pence about his discussions with the Russian ambassador. Flynn reportedly made similar statements to the FBI, which could potentially be a crime.

Trump allegedly told Comey that Flynn hadn’t done anything wrong and that he was a “good guy and has been through a lot.” Trump then said to Comey, “I hope you can see your way clear to letting this go, to letting Flynn go. He is a good guy. I hope you can let this go.” Comey writes that he told the president he agreed Flynn was a “good guy” but did not say he would “let it go.” Comey adds that he didn’t think Trump was talking about the “broader investigation into Russia” but that he “understood the President to be requesting that we drop any investigation of Flynn in connection with false statements about his conversations with the Russian ambassador in December.” According to Comey, he and the FBI leadership team “did not intend to abide” by Trump’s request.

Comey says Trump demanded loyalty from him. According to Comey, during a private dinner on January 27, Trump asked him if he wanted to keep his job—a question that Comey says he “found strange because [Trump] had already told me twice in earlier conversations that he hoped I would stay, and I had assured him that I intended to.” Comey writes that he interpreted both the one-on-one nature of the dinner and the way Trump asked this question as at least partly “an effort to have me ask for my job and create some sort of patronage relationship.” Comey says the situation “concerned me greatly” and that he told Trump that the president could not count on him to be a “reliable” ally “in the traditional political sense.”

According to Comey, Trump then said, “I need loyalty, I expect loyalty.” Comey writes that after Trump said this, “I didn’t move, speak, or change my facial expression in any way during the awkward silence that followed. We simply looked at each other in silence.”

Comey says that later in the dinner, Trump returned to the topic of Comey’s job, saying he’d heard great things about him from Secretary of Defense Jim Mattis, Attorney General Jeff Sessions, and others. Trump repeated that he wanted loyalty, and Comey told him that Trump would “always get honesty” from him. Trump paused and then said, “That’s what I want, honest loyalty.”

Comey told Trump that he, personally, was not under investigation…yet. Comey writes that during his initial meeting with Trump on January 6, he met with Trump privately to discuss “some personally sensitive aspects of the information” that intelligence agencies reviewed when they put together a report outlining Russian meddling in the 2016 presidential campaign. Comey writes that he told Trump that the FBI “did not have an open counter-intelligence case on him.” Comey says he reiterated that fact to Trump on January 27 and March 30 and referenced it again during an April 11 phone call. During the March 30 phone call, according to Comey, Trump asked Comey to publicize the fact that Trump wasn’t personally being investigated. Comey writes that the “Department of Justice had been reluctant to make public statements that we did not have an open case on President Trump for a number of reasons, most importantly because it would create a duty to correct, should that change.”

Trump had many more one-on-one interactions with Comey than Obama did—and Comey “felt compelled” to document those meetings: Comey says that after his first meeting with Trump on January 6 in Trump Tower, he “felt compelled” to document his private conversation with Trump immediately after leaving the meeting. He adds that “[c]reating written records immediately after one-on-one conversations with Mr. Trump was my practice from that point forward.” Comey notes that he had not engaged in that practice during the Obama administration. Comey says he spoke with Obama alone only twice in the three and a half years that they overlapped. By contrast, he had nine one-on-one conversations with Trump between January 6, 2017, and his firing on May 9.

To Wittes, the fact that Comey felt the need to document his interactions with Trump says a lot. “Comey is saying here how little he trusted Trump from the beginning, and that Trump’s behavior caused him to behave differently than he had in the past,” Wittes writes.

The way Trump talks privately about the Russia investigation is significantly different from his public statements: Trump has publicly described the Russia investigation as a “witch-hunt” and a waste of time and resources. In private, he apparently has a different take. Comey’s statement alleges that while Trump denied having personally done anything improper, he did allow for the possibility that some of his associates might have. “The president went on to say that if there were some ‘satellite’ associates of his who did something wrong, it would be good to find that out, but that he hadn’t done anything wrong and hoped I would find a way to get it out that we weren’t investigating him,” Comey writes.

Comey asked Attorney General Jeff Sessions to keep Trump away from him: Comey writes that after Trump asked him on February 14 to “let [the Flynn matter] go,” he asked Sessions to make sure he wouldn’t have to participate in any more one-on-one meetings with the president. “I took the opportunity to implore the Attorney General to prevent any future direct communication between the President and me,” Comey says. “I told the AG that what had just happened—him being asked to leave while the FBI Director, who reports to the AG, remained behind—was inappropriate and should never happen. He did not reply.”