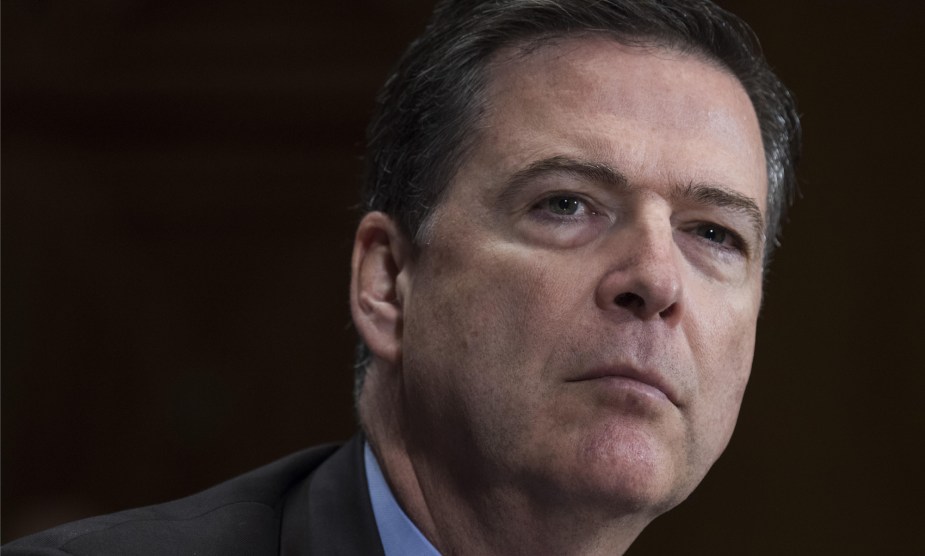 The release of former FBI Director Jim Comey’s prepared text for his upcoming congressional testimony has created a moment of crisis for Republicans and conservatives. And many are failing the challenge. Their reactions are revealing a profound dishonesty that far exceeds the norms of usual political spin, and are demonstrating that the Trumpified quarters of the GOP and the conservative movement are intellectually bankrupt and devoid of principle. These partisans now stand naked, and it sure ain’t pretty. It’s also a bad sign for the health of our constitutional democracy.

Comey’s statement is a troubling, just-the-facts account of his interactions with President Donald Trump. By now, everyone knows the big picture: Trump, in this recounting, demanded an oath of fealty from the supposedly independent FBI director, pressed him to “lift the cloud” cast over the Trump White House by the ongoing Russia investigation, and leaned on Comey to quash an FBI investigation into Michael Flynn, Trump’s first national security adviser. Comey’s statement also notes that he did tell Trump several times that the president himself was not under investigation (at least not at the time of these conversations).

Comey’s account is a damning indictment of the president. It depicts a stark abuse of power, as Trump tried to recruit the FBI chief as a member of his political crew and pushed him to smother the probe of a close associate. It also contradicts Trump’s public statement that he did not pressure Comey to let Flynn off the hook. (Yes, according to Comey, Trump lied.) Here we have a president prevaricating and perverting justice, not defending the Constitution. Some legal observers have declared this evidence of obstruction of justice—especially when paired with Trump’s explanation that he pink-slipped Comey in part because of the “Russia thing” (not to mention his Oval Office statements to Russian officials that his firing of Comey eased pressure on him from the FBI’s investigation).

So how are Republicans and conservatives who support the president contending with this disturbing portrait of Trump? Some have declared victory or insisted there’s nothing worrisome in this picture.

Trump’s recently hired private attorney Marc Kasowitz led the way. He declared, “The President is pleased that Mr. Comey has finally publicly confirmed his private reports that that the President was not under investigation in any Russia probe. The President feels completely and totally vindicated. He is eager to continue to move forward with his agenda.”

The Republican National Committee took the same line. Ronna McDaniel, the party’s chairwoman, contended,  “President Trump was right. Director Comey’s statement reconfirmed what the president has been saying all along—he was never under investigation.” And with a snarky tweet, the RNC simultaneously insisted there was no substance in the Comey statement.

Trying to find something of substance in Comey’s opening statement like pic.twitter.com/igLC4JPREg

New York Times columnist Ross Douthat took a similar tact and ho-hummed the whole thing, asserting there were no “bombshells” in the prepared testimony.

Lots of great atmospheric details but no new bombshells here.

Douthat was on the same page as the gang at Breitbart, which declared Comey testimony a “nothing burger,” while highlighting the portion in which Comey noted he had told Trump that Trump was not personally under scrutiny.

Sen. Richard Burr (R-N.C.)—the chair of the Senate Intelligence Committee investigating possible Trump-Russia ties—said, “I don’t think it’s wrong to ask for loyalty of anyone inside an administration. I don’t think of what I’ve read there’s anything of wrongdoing.” New Jersey Gov. Chris Christie—once a member of Trump’s inner circle—absurdly brushed aside Comey’s statement by remarking that Trump’s discussions with the G-man were just  “normal New York City” conversations. Sen. James Langford (R-Okla.) also tried to wave aside this latest controversy as merely a matter of Trump’s rhetorical style, telling Fox News, “This reads like the president talks. It sounds like a guy who is not a Washington guy.” Christie and Lankford were engaging in variants of Trump’s “locker-room” defense for the grab-them-by-the-pussy video.

Meanwhile, most Republican leaders—including House Speaker Paul Ryan and Senate Majority Leader Mitch McConnell—initially remained mute. On Wednesday night, Ryan said on MSNBC that there was nothing new in Comey’s statement, but he acknowledged that it was inappropriate for Trump to have asked for Comey’s loyalty.

On the right, the urge to make all this go away is so strong that reality must be insulted. A former FBI director—publicly and under oath—accusing a president of trying to halt an FBI investigation is itself a bombshell. (Imagine what Republicans would have done if an FBI chief had declared that President Barack Obama tried to muscle him to protect a close associate.)  Trump is not vindicated. He stands accused by a credible witness. Comey disclosing that he thrice told Trump that he was not a direct target of the FBI’s Russia investigation does not mitigate this fact. As Comey noted, during one of his conversations with Trump, the president raised the possibility that “satellite” associates of his might have engaged in wrongdoing. (And if Republicans and Trump’s defenders are going to take Comey at his word when he says he told Trump he was not personally under investigation, they must accept Comey’s claim that Trump tried to subvert the Flynn investigation.)

It is especially concerning that the man in charge of the Senate’s Russia investigation, which has been regarded as the most credible effort on Capitol Hill probing the scandal, sees no “wrongdoing” in Trump’s attempt to stifle an FBI probe.

In any world not governed by the need to defend Trump at all costs, the Comey statement would be devastating in the eyes of all. Comey’s tale calls into question the president’s understanding and allegiance to the rule of law. It casts Trump as a liar and a scoundrel who engaged in action that might even be illegal. Republicans and Trump defenders cannot accept the true meanings of this text. To do so would be to acknowledge too much. They have to distort reality and embrace dishonesty to deny the statement’s significance and its newsworthiness, to dismiss it as nothing, or to cherry-pick the few lines that partially support Trump’s previous assertions. Consequently, they have to bare their worst to protect their president. Trump has forced them into an ugly act of self-abuse that cheapens them and abets a dangerous erosion of constitutional democracy.