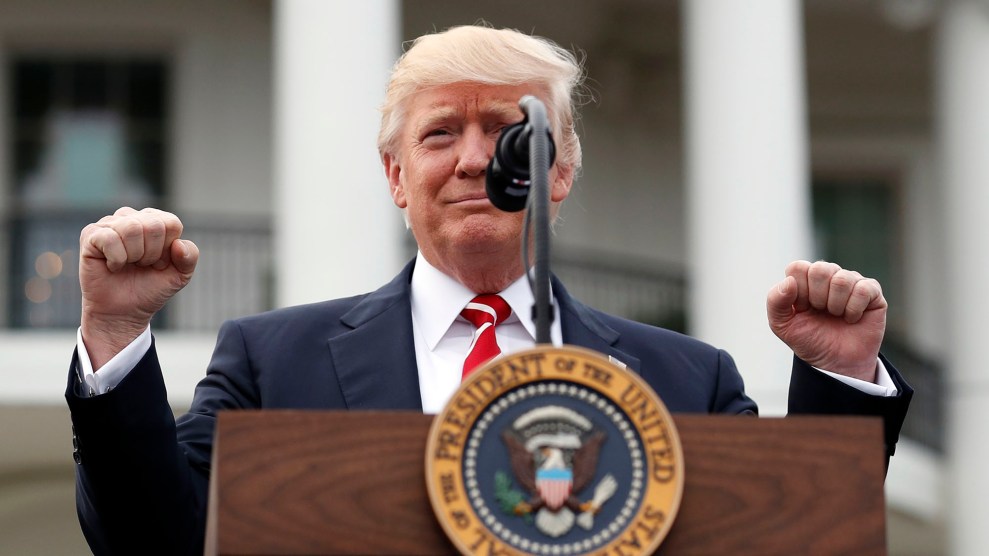 President Donald Trump reacts as he begins to speak at the Congressional Picnic on the South Lawn of the White House, Thursday, June 22, 2017, in Washington. Alex Brandon/AP

After the Supreme Court waded into the legal morass of President Donald Trump’s travel ban on Monday—announcing that it would review the ban and allowing most of it to take effect during that process—both sides declared victory. It’s almost as if that was exactly what the court intended.

Trump called the court’s decision to partially lift the injunctions on his executive order a “clear victory for our national security” that allows the ban “to become largely effective.” In response, the ACLU tweeted, “No, @POTUS, today’s Supreme Court decision does not allow your travel ban to take effect. We look forward to seeing you in court.”

In different ways, both of them are right. In one of the most contentious and important battles of the Trump presidency to date, the Supreme Court may have found a way to appease both sides without handing a full victory to either. For Trump, who manages to spin even the most dubious outcomes as big wins, Monday’s order may have given him plenty of fodder—after all, a ban with exceptions is still more of a success than Trump’s gotten from the lower courts, which have universally ruled against him. For the ban’s opponents, the narrowness of the ban that will go into effect could also constitute a win. Finally, the court set up the case such that it may never ultimately issue a final ruling—allowing the ban’s critics to declare a substantive victory over the administration but sparing the president what would likely be an embarrassing loss this fall.

The Supreme Court limited the scope of the president’s bans on refugees from around the world and on travelers from six Muslim-majority nations, but it allowed them to take effect in reduced form. With respect to the 90-day entry ban for people from Iran, Libya, Somalia, Sudan, Syria, and Yemen, the court ordered that it cannot be enforced “against foreign nationals who have a credible claim of a bona fide relationship with a person or entity in the United States.” Immigrant advocates and civil libertarians argue that most travelers from these countries do indeed have such a connection that would exempt them from the ban.

“Hypothetically, it shouldn’t apply…to anyone who already has a visa,” Becca Heller, director of the International Refugee Assistance Project, told reporters on a conference call Monday. “So it should only apply to pending visas. And in the entire universe of pending visas, there’s only one category of visa that doesn’t involve a tie to a US entity like a school or a job or a hospital or a US individual like a relative, which would be a tourist visa. So to me, the plain text of the order suggests that the only people affected by this would be people applying for a new visa from the six countries to come in solely for tourism purposes who don’t know anyone in the US.”

But a narrower interpretation of the Supreme Court’s intentions is also possible. The court stated that for people relying on a family connection to secure a visa, “a close familial relationship is required” to be exempted from the ban. The decision over whether a cousin or an uncle counts would likely fall to officials who enforce the ban, from embassies and airports to the departments of State and Homeland Security. Depending on how the Supreme Court’s order is carried out, immigration and refugee advocate groups could sue over the government’s implementation of the limited ban.

“The rubber is going to hit the road when the very narrow portion of this stay is lifted” 72 hours from the court’s order, Karen Tumlin, legal director at the National Immigration Law Center, said on the conference call. Groups like hers will be watching to make sure the government doesn’t implement an “overly restrictive” implementation of the court’s order. Leah Litman, a law professor at the University of California, Irvine, cautions at the Take Care blog that the order leaves the people enforcing the order a lot of discretion that could be “administered in discriminatory ways (whether subconsciously or otherwise).” This will force advocates and civil rights groups to remain vigilant all summer, monitoring airports, aiding visitors and refugees, and likely filing lawsuits.

The refugee ban has been more thoroughly gutted the Supreme Court’s announcement, advocates refugees believe. The justices used the same language for refugees as for visitors in the ban: They’re exempt if they “can credibly claim a bona fide relationship with a person or entity in the United States.” Because refugees work for years with the US government as well as nongovernmental organizations throughout the application process, it’s hard to imagine a refugee who would not fall within the court’s exemption. “From the refugee resettlement agency perspective, we don’t think any of our clients and people we work with to help resettle here would be affected,” Melanie Nezer, a spokeswoman for the refugee resettlement organization HIAS, said on the conference call.

But the court has potentially deprived the groups opposing the ban of an ultimate vindication. Trump’s executive order states that the travel ban lasts 90 days and the refugee ban lasts 120 days. It is likely that the 90-day clock will begin on Thursday and run out on September 27, before the Supreme Court hears arguments in the case in October. The refugee ban will have run its course by the end of October. That means that by the time the court hears the case, it will likely already be moot. In other words, the court may throw out the case in October without oral arguments. Or it could hear oral arguments but then decline to issue an opinion, finding instead that the issue has become moot because the ban has ended. The justices have specifically asked that both sides address the issue of mootness.

“I will therefore be very surprised if the Court issues a merits opinion in these cases—indeed, it’s very possible there won’t be any oral argument,” Marty Lederman, a former official in the Justice Department’s Office of Legal Counsel, wrote Monday in a blog post at Just Security. Litman concurred, “It is a little odd to grant a petition and accompanying stay requests in a case, knowing it will become moot before argument is heard.”

Maybe the justices’ maneuver should be viewed not as odd, but as clever. As Mother Jones has reported, the government’s case to allow the travel ban has grown weaker as it has risen to the Supreme Court. The original logic behind the ban was that it would allow the government to put all its resources toward a review of its visa vetting procedures. But as the case moved up toward the Supreme Court, the timing of the ban became untethered from the timing of the review. In fact, Trump amended his executive order to explicitly state that the ban could go into effect long after the review was completed. The court seems skeptical of the argument that the ban is necessary to conduct the review, because it has allowed the review to go forward while only a limited version of the ban is in place. The court’s Monday order even noted that the review should be finished by the time the justices are slated to review the case.

So the court, by letting the clock run out on the ban, has likely spared both sides both an official victory and an official loss. But because of the government’s weakening legal position, it is likely the president who has been spared a humiliating defeat while given the ability to claim victory. The court has ventured into the heart of an explosive political showdown, perhaps not to resolve it but to defuse it.