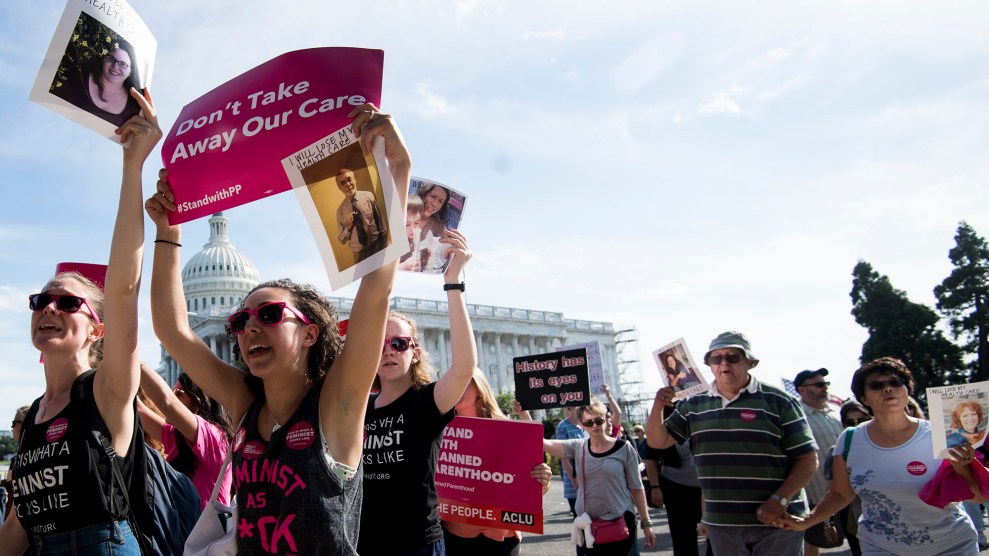 Protesters march around the Capitol to voice their opposition to the GOP health care legislation on Wednesday, June 28, 2017.Bill Clark/CQ Roll Call via AP Images

Senate Republicans may have ditched their plans to hold a health care vote this week, but that didn’t stop protesters from flooding the US Capitol grounds Wednesday afternoon to voice their opposition to the GOP’s plan to repeal Obamacare. The protest, dubbed Linking Together: March to Save our Care, was organized by a host of liberal groups, including Planned Parenthood, the ACLU, SEIU, and others.

With the bill on hold, Senate Majority Leader Mitch McConnell (R-Ky.) is still working behind the scenes to craft a deal and is hoping to vote once senators return from recess next month. The current iteration of the bill would leave 22 million more people uninsured by 2026 than under current law. It would implement massive cuts to Medicaid—reducing spending on the program by $772 billion over the next decade—in order to fund massive tax cuts, which would largely benefit the richest Americans. “The 400 highest-income taxpayers alone would receive tax cuts worth about $33 billion from 2019 through 2028, which is more than the federal spending cuts from ending the Medicaid expansion in any one of 20 expansion states and the District of Columbia,” the liberal Center for Budget and Policy Priorities concluded, based on the version of the legislation that passed the House last month.

Meanwhile, both the House and Senate bills include provisions that would allow states to opt out of Obamacare regulations that require insurance to cover categories of essential health benefits, a key protection for people who have preexisting conditions. Both bills would allow insurance companies to jack up rates on older Americans and would offer less money than Obamacare to help poor people buy insurance on the individual market.

Alison Farmer, an executive coach in DC who has crohn's: "I hope there are some senators in there who are our voices" pic.twitter.com/qdkmkgkJjZ

The DSA portion of the crowd starts at "single payer" chant when Nancy Pelosi takes the stage pic.twitter.com/JrlLmloiZM

Sarah, who's been a Planned Parenthood patient since she was 15, says she came out especially because @lisamurkowski was waffling https://t.co/Z6bH858hU6

Mother Jones’ Patrick Caldwell, Hannah Levintova, and Mark Helenowski are on the scene at the protest, and we’ll be adding live updates from what they see there.