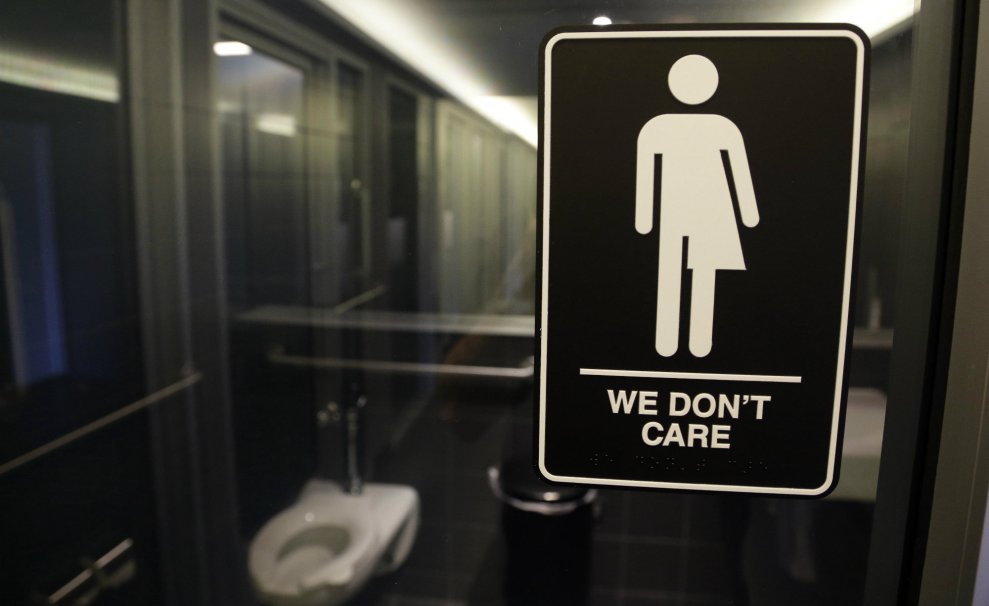 Earlier today the Texas House voted overwhelmingly to give final approval to legislation that would force transgender students in public schools and public charter schools to use the bathroom that corresponds to their sex assigned at birth or a bathroom that’s separate from other students—ultimately prohibiting them from using the facility that best matches their gender identity.

The move comes in the final days of a tense legislative session that ended as it began: debating the economic, moral, and personal stakes of a so-called “bathroom bill.” And it seemed, as recently as last week, as though the session might end without passing the long-debated legislation, prompting Lt. Gov. Dan Patrick to threaten to force a special session if lawmakers failed to pass the bill.

Part of the hold up in the House was the sweeping nature of the Senate’s bathroom bill, passed back in March, which aims to prohibit transgender people from using the bathroom most appropriate for them in all public buildings and public schools, while simultaneously prohibiting localities from passing nondiscrimination ordinances. Conservative lawmakers in the House bristled at the legislation not out of concern for civil rights, but for state finances. The Texas Association of Businesses estimated the initial proposal could lose the state $8.5 billion per year. When North Carolina passed legislation barring transgender people from using the bathroom that best matches their gender identity and nullifying local nondiscrimination ordinances, businesses relocated and major revenue-generating events were rescheduled in other states. So, instead of voting on the more extreme Senate legislation, SB 6, Texas’s House amended a bill focused on school emergency operations, SB 2078. To become law, their amendment focused solely on schools. Now it’s kicked back to the Senate for approval.

Even still, narrowing the scope of the bill did little to placate Democrats, who say this legislation is about a lot more than bathrooms. “White. Colored. I was living through that era…bathrooms divided us then, and it divides us now,” said Rep. Senfronia Thompson (D-Houston), a black woman, according to the Texas Tribune. “America has long recognized that separate but equal is not equal at all.”

Many Republicans, including the representative who authored the amendment, reject that assessment and insist the legislation isn’t discriminatory. “There is absolutely no intent, and I would argue nothing in this language discriminates against anybody,” said Rep. Chris Paddie (R-Marshall). “We want to make sure we provide definitive guidance to our school districts.”

Beyond fears for students’ civil rights, the bill’s opponents also point out that this kind of legislation is dangerous for transgender youth, who are at a heightened risk for having depression, having anxiety, or attempting suicide compared to the general population, something linked to the discrimination they face. Access to the appropriate facilities plays a role in mental health outcomes: a 2016 study in the Journal of Homosexuality found that being denied access to housing and bathrooms that match one’s gender identity in college increased a transgender person’s risk for suicide.

It’s also clear that separate, segregated facilities are not equivalent to being able to use the appropriate bathroom. The bleak reality for trans students has been driven home by a five-year-old transgender girl and her mom, who have become the public faces of the Texas fight and profiled by several media outlets. Kai Shappley had an accident when the gender-neutral bathroom she was supposed to use in the nurse’s office was locked. “As a mom, you don’t want your kid to become bitter and jaded, and so you tell them it’s not your fault and it happens,” her mother said in an interview with Fusion earlier this year. “But in your head, you’re like ‘What the hell? Nobody could get her to a potty?'” (The school says there’s no evidence the accident happened.)

“There is no moral middle ground on discrimination,” said Texas Freedom Network president Kathy Miller in a statement. “Either you discriminate, or you don’t. This amendment, if it becomes law, would leave transgender students even more vulnerable to being stigmatized and bullied simply because they are different.”