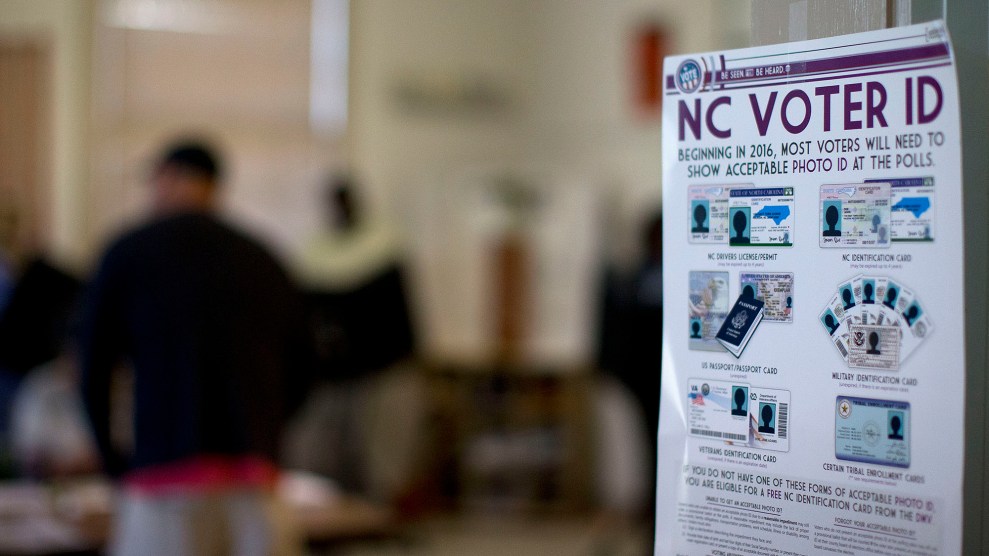 The Supreme Court handed voting rights advocates a big—if temporary—victory on Monday morning when it announced that it would not review a massively restrictive North Carolina voting law. That means that a stinging 4th Circuit Court of Appeals decision that struck down the law will remain in place.

The law, enacted shortly after the Supreme Court gutted the Voting Rights Act in 2013, imposed stringent voter ID requirements, shortened early voting by a week, and prohibited out-of-precinct voting. The 4th Circuit’s ruling last summer has been widely cited for its scorching language about the law, calling it “the most restrictive voting law North Carolina has seen since the era of Jim Crow,” which targeted “African Americans with almost surgical precision.” If the Supreme Court had agreed to review the lower court’s ruling, the court’s conservative majority might have upheld the law.

Generally, if the Supreme Court doesn’t take a case, it means the justices are satisfied with the lower court’s ruling. But this case might be different. After the 4th Circuit ruled, the state’s Republican governor appealed the decision to the Supreme Court. But after that governor, Pat McCrory, lost his reelection bid in November 2016 to Democrat Roy Cooper, the Cooper administration attempted to withdraw the appeal filed by his predecessor. Chief Justice John Roberts indicated Monday that it might be the confusion over the appeal to the Supreme Court, rather than the merits of the case, that ultimately led the court not to take it up. “Given the blizzard of filings over who is and who is not authorized to seek review in this Court under North Carolina law, it is important to recall our frequent admonition that ‘[t]he denial of a writ of certiorari imports no expression of opinion upon the merits of the case,'” Roberts wrote.

That’s cold comfort for voting rights advocates who worry that the Supreme Court will ultimately uphold a strict voter ID law like North Carolina’s. Still, they’re expressing relief that the 4th Circuit’s opinion will stand. The law “is meeting its much-deserved demise,” Dale Ho, director of the ACLU’s Voting Rights Project, said in a statement. “An ugly chapter in voter suppression is finally closing.”