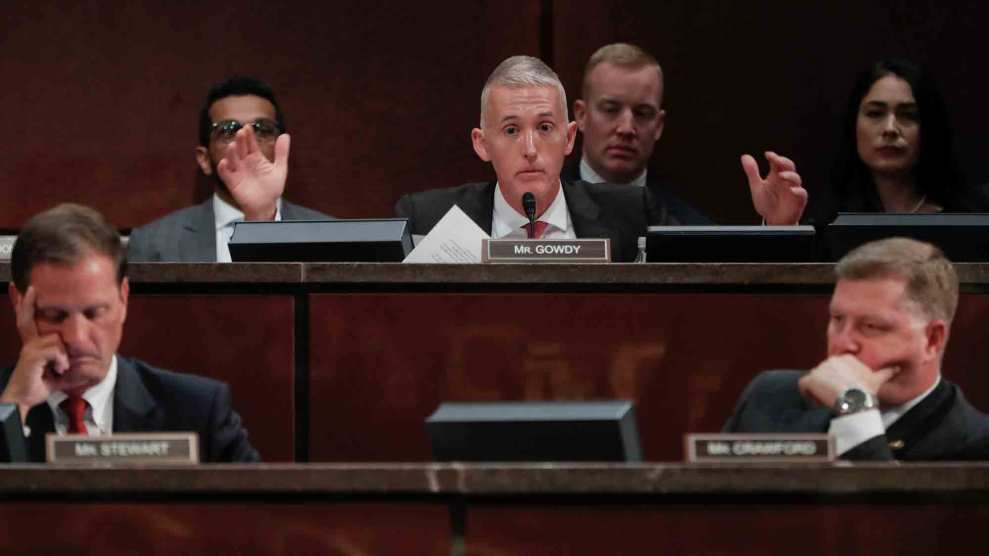 The Republicans still are not serious about investigating the Trump-Russia scandal. That message came through resoundingly when the House Intelligence Committee held a public hearing on Tuesday morning with former CIA chief John Brennan. (Actually, this was not officially a committee hearing. Democrats on the committee were informed earlier that this would be considered a “task force” hearing because the Republican chairman of the committee, Rep. Devin Nunes, could not appear because he had recused himself from the Russia investigation.)

At the witness table, Brennan told a harrowing tale. As CIA director last summer, he saw what was happening with the hack-and-leak attack on the Democratic National Committee, and he reviewed top-secret intelligence and concluded that Russia was mounting this assault to disrupt the election, hurt Hillary Clinton, and help Donald Trump. He also at the time was aware of intelligence that showed contacts between Trump associates and Russia, and that caused him to conclude a thorough FBI investigation was warranted. He testified, “I saw interaction” that warranted concern.

This was a big deal. In March, then-FBI chief James Comey revealed during testimony to this committee that in July 2016 the bureau launched an investigation of contacts between Trump associates and Russia. Now the CIA head from then was stating that there was clear intelligence that justified that probe. He also revealed that in early August he was so concerned about the Russian operation he spoke to the head of Russia’s FSB, the country’s intelligence service, and warned him to knock it off. Brennan also revealed that in August and September he briefed a small number of congressional leaders and shared with them top-secret intelligence about Moscow’s effort to subvert the election in part to benefit Trump. (This means that Senate Majority Leader Mitch McConnell and House Speaker Paul Ryan knew many details about the Russian operation but didn’t challenge or correct Trump’s continued public assertions that Russia was not necessarily the culprit in the DNC hack.)

Yet once again Republicans did not focus on the main elements of the story. When the Republicans on the committee had the chance to question Brennan, they did not press him for more details on Russia’s information warfare against the United States. Instead, they fixated on protecting Trump.

The Republicans zeroed in on the issue of whether Trump and his associates colluded with any Russians involved in the attack on US democracy—to push Brennan to say he had not seen concrete evidence of such conspiring. Reps. Tom Rooney (R-Fla) and Trey Gowdy (R-S.C.) grilled Brennan repeatedly on this point. They posed the same basic query: Did you see any evidence that Trump or his associates plotted with Russians? “I don’t do evidence. I do intelligence,” Brennan replied. Still, they kept pressing him. They were obviously hoping he would state that he had not come across any such evidence so Trump and his champions could cite Brennan as a witness for their claim no collusion occurred.

In the face of this questioning, Brennan repeatedly stated that the intelligence he saw regarding contacts between Trump associates and Russia was worrisome and deserved full FBI scrutiny. So the Republicans failed in their mission to provide cover for Trump—and they ended up highlighting the legitimacy of the FBI inquiry begun under Comey.

A similar effort fell flat. Rep. Peter King (R-N.Y.) questioned Brennan about the intelligence community assessment released in early January that concluded the Russian clandestine operation was designed to assist Trump. He several times asked Brennan if there had been evidence contrary to this conclusion that was not included in the report. Brennan explained that the assessment was the result of a thorough interagency process that looked to develop a consensus position. Still, King seemed to suggest that the assessment might be open to question. And Rep. Chris Stewart (R-Utah) asserted he had reviewed raw intelligence, and he insisted the information supporting the assessment that Moscow had preferred Trump was not as solid as the intelligence community maintained. Here were Republicans trying to find wiggle room for Trump.

Rooney took another stab at undermining the dominant narrative of the Trump-Russia scandal. He asked whether the Russians had been rooting for Clinton to fail or for Trump to win. “It was both,” Brennan replied. Rooney suggested that the Russians had gathered information damaging for Clinton’s campaign that it did not release, and he asked Brennan, what would that mean for the conclusion that Russians were trying to help Trump? It appeared as if Rooney thought this would be an a-ha! moment: If the Russians sat on anti-Clinton material, well, that must be an indicator they hadn’t’ engaged in cyber-skullduggery to help Trump. Brennan shot this down with a simple reply: Since the Russians, like many others, believed Clinton would win, they might have been holding on to that material to damage her once she became president.

Rep. Michael Turner (R-Ohio) also tried to race to Trump’s rescue. Complaining that some Democrats on the committee have publicly said they have seen evidence of Trump-Russia collusion, Turner asked Brennan if it would be accurate to characterize the intelligence Brennan saw when he was CIA chief as evidence of collusion. Brennan responded that this would not be an accurate characterization. Turner smiled, as if he had just blown a hole in the Democrats’ case. Moments later, Rep. Eric Swalwell (D-Calif.) asked Brennan if he had seen the evidence and material shared by the FBI with the House Intelligence Committee in classified meetings. No, he had not. So Turner had proved nothing.

Perhaps the most absurd act of GOP distraction came when Rep. Ben Wenstrup (R-Ohio) raised an episode from 2012, when President Barack Obama was caught on a hot mic telling Dmitry Medvedev, then the president of Russia, that he would have more flexibility to negotiate with Vladimir Putin after the US presidential election. Calling this moment “pretty disturbing,” Wenstrup asked Brennan, “Would you question that interaction?” Brennan didn’t take the bait and said he had nothing to say in response. Wenstrup suggested that perhaps this should be investigated. Brennan didn’t reply.

Gowdy finished up his questioning by concentrating on leaks and the unmasking within top-secret reports of Americans picked up incidentally by US intelligence surveillance. This has become a favorite topic of Republicans looking to defect from the core features of the Trump-Russia scandal. And Gowdy, a bit defensively, noted he had waited until the end of the hearing to pose these questions so the claim could not be made that Republicans are “hyperfocused” on the matter. Yet compared with previous hearings, Gowdy was restrained in declaiming leaks. This time he did not suggest, as he has before, that journalists should be prosecuted for publishing stories containing classified information.

When the hearing ended, the Republicans departed the room quickly. A few Democratic members lingered. One complained about the slow pace of the committee’s investigation. Another pointed out that Rep. Mike Conaway (R-Texas), who’s leading the committee’s Russia investigation in Nunes’ absence, had barely participated in the hearing. Conaway had opened the hearings without any reference to the interactions between Trump associates and Russia, but he had presented a prayer that invoked Jesus. As one Democrat noted, Conaway did not ask a single question during the proceedings. “That tells you all you need to know,” this member said.