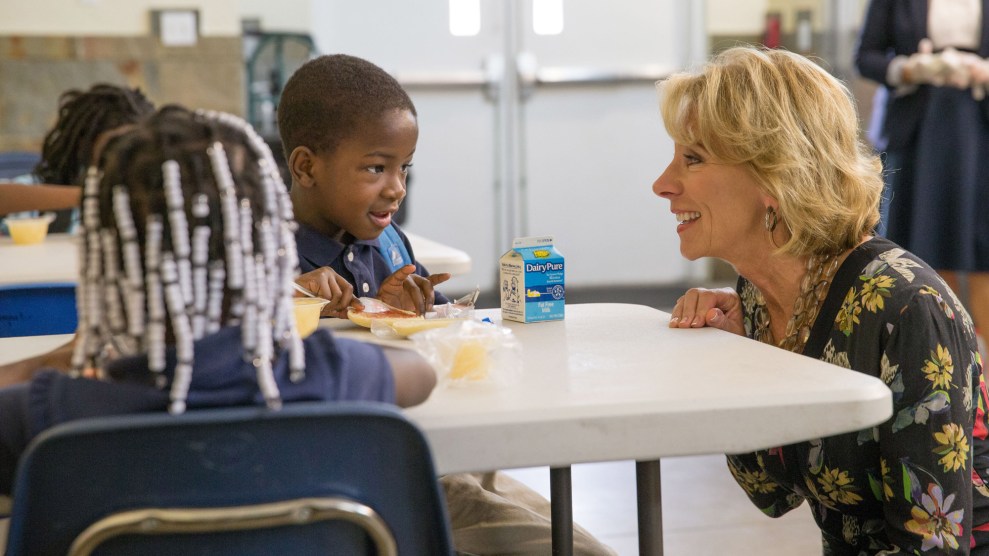 More than 60 years after Brown v. Board of Education, the progress made toward dismantling segregated schools in the South, once the most integrated region in the country, seems to be steadily falling apart.

A report released this week by UCLA’s Civil Rights Project and Penn State University’s Center for Education and Civil Rights finds that in 2014, more than one in three black students attended a school in the South that was intensely racially segregated, meaning a school where 90 percent of students were racial minorities—a 56 percent rise from 1980. The report also finds that the number of Latino students enrolled in public schools in the South surpassed black enrollment for the first time ever, making up 27 percent of the student body. That’s significant, as the percentage of Latino students in the South attending an intensely racially segregated school is also on the rise—42 percent in 2014, up from 37 percent in 1980.

The result, the report notes, is that the typical student faces decreasing exposure to a race other than his or her own. The average black public-school student in the South in the 2014-2015 school year went to a school that was 27 percent white, while the average white public-school student attended a school where black students made up 15 percent of those enrolled. And, perhaps unsurprisingly, segregation doesn’t get any better when poverty is taken into account: Black, Latino, and low-income students saw a rapid increase in exposure to poverty in the last decade as compared to their white and Asian peers.

While the problem is getting much worse in the South, it’s far from confined to the region. Last year, a US Government Accountability Office report concluded that nationally the number of high-poverty public schools—or those where at least 75 percent of students were black or Hispanic and at least 75 percent of students were eligible for free or reduced-lunch—more than doubled between 2001 and 2014. The GAO report also found that the country saw a nationwide rise in the percentage of schools separated by race and class, from 9 percent to 16 percent, in the past decade and a half. These stats are further supported by a new report released on Thursday by the Department of Education’s National Center for Education Statistics, which finds that black and Latino students in the 2014-2015 school year disproportionately attended high-poverty schools; while 8 percent of white students attended high-poverty schools across the country, nearly half of black and Hispanic students did so.

This is a massive problem as research has shown that students who attend integrated schools score higher on tests and are more likely to enroll in college. Moreover, as the GAO report notes, high-poverty schools have tended to provide fewer resources and opportunities to minority students.

Erica Frankenberg, co-director of Penn State’s Center for Education and Civil Rights and the co-author of the report, says that as court oversight of school districts has diminished, some have returned to relying on neighborhood schools, an act that could perpetuate segregation if housing around the neighborhood is also divided. Consider a place like Charlotte, North Carolina, where a 1971 Supreme Court decision resulted in the implementation of a mandatory busing program for kids in Mecklenburg County in an attempt to make schools there more racially balanced. Over three decades, the district became a model for integration across the country. That lasted until 2001, when a legal challenge resulted in the program’s end. The district turned to a student-assignment plan that let students attend schools in their neighborhoods, confining them to institutions in areas long shaped by housing segregation.

Making matters worse are recent efforts from communities to break away from larger metropolitan school districts. The break-away communities tend to be whiter and wealthier than the larger district, and when they leave, they take funding gained from property taxes, in turn negatively impacting the students left behind. Most recently, for instance, a federal judge in Alabama allowed members of the city of Gardendale to establish its own school district, beginning with two elementary schools, despite concluding that race motivated the community’s actions. A forthcoming report by the non-profit EdBuild finds that of the 45 successful attempts to split from larger school districts since 2000, 17 occurred in the South.

What sticks out most to Frankenberg, however, is the rapid growth of charter schools in the South. She noted that growth of enrollment in charters in the region outpaced that of the rest of the country. The number of charter schools in the region has actually quadrupled to more than 700,000 in the past decade, enrolling 4.4 percent of all students in the South in 2014. While black and Latino students make up most of the students enrolled in charters in the region, the percentage of charters’ white students has fallen over the past decade. Mirroring what’s happening in traditional public schools, black and Latino students in charters are, on average, less exposed to white peers. The average black student in a charter school, for instance, attends a school with 16 percent white student enrollment.

That lack of exposure, coupled with the pace of charter-enrollment growth, Frankenberg says, has helped drive the overall pattern of segregation in the region. In the 2007-2008 school year, just Florida and Louisiana had more than 3 percent of students enrolled in charters in the region. Now, they are joined by North Carolina, Texas, Georgia, Arkansas, and South Carolina. And though private school enrollment in the South and nationally has been declining since 2001, 1.2 million kids in 2011, the most recent year of available data, were still enrolled in private schools in the South—70 percent of whom were white.

So, as the Trump administration doubles down on an investment in promoting school choice nationally—at the expense of after-school programs, subsidized loans, and other deep proposed cuts—the report recommends state officials not let communities break away from school districts and suggests policymakers ensure school-choice programs are implemented in such ways that encourage integration. Unfettered choice without careful design could lead to further segregation, just like it did in the South decades ago and, more recently, in Education Secretary Betsy DeVos’ home state of Michigan.

“Our lost progress on segregation for southern black students, and our failure to ever confront segregation for Southern Latino students, has to be a wakeup call for the region’s leaders,” Genevieve Siegel-Hawley, an associate professor at Virginia Commonwealth University and a co-author of the report, said in a statement.