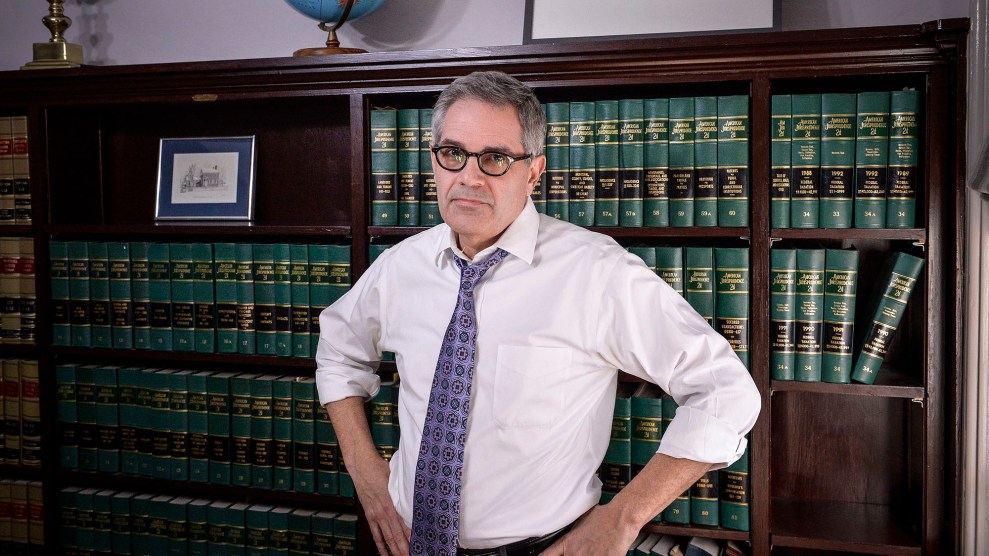 Update, 5/17/17: On Tuesday night, Larry Krasner was declared the winner of the Democratic nomination for Philadelphia district attorney. Krasner won 38 percent of the vote, and outstripped runner up Joe Khan by nearly 18 percent for the right to run against Republican candidate Beth Grossman in November’s general election. In a city where Democratic voter registration outnumbers Republican by a factor of 7-to-1, Krasner is favored to become Philly’s newest DA. The result is being hailed as the end of the “tough on crime” attitude that has characterized Philadelphia’s criminal justice system for decades.

Krasner’s being hailed as an unlikely favorite and a radical outsider who just might have the gumption—and the support—to shake up Philadelphia’s punitive culture.

So he hardly seems like someone who’d want to assume the mantle of one of America’s top prosecutor jobs—for one thing, Krasner has no formal political experience. But as he watched the usual suspects throwing their hats in the ring for Philadelphia’s 2017 district attorney’s race, the 56-year-old felt like it was time to try and change things from within. On February 8, standing alongside activists and organizers from groups he’d previously defended, he announced his campaign. Just a few months later, as the city gears up for its primary on May 16, Krasner’s being hailed as an unlikely favorite and a radical outsider who just might have the gumption—and the support—to shake up Philadelphia’s punitive culture and send a message to the country that mass incarceration is a failed strategy.

Nowhere is the reality of “tough on crime” more evident than Philadelphia. Former DA Lynne Abraham, winner of four straight terms from 1991 to 2010, was known both as “America’s Deadliest Prosecutor” and the “Queen of Death” for her fervid pursuit of executions, over 100 in total. Former mayor and police commissioner Frank Rizzo is among the most notorious cops in American history, once claiming he’d “make Attila the Hun look like a faggot” while on the mayoral campaign trail. That legacy has helped give the City of Brotherly Love the highest incarceration rate of the 10 largest cities in the United States, twice the national average. (It’s also the poorest, with one of the lowest-rated public school systems to boot.)

Criminal justice crusaders saw some hope when Democrat Seth Williams, a self-identified progressive reformer, took the job as the city’s first African American DA in 2010. He claimed he’d champion reasonable reforms to chip away at mass incarceration. But since then, Williams has managed to run up a rap sheet that evinces an almost cartoonish level of corruption. He has been under FBI investigation since August 2015 and on the receiving end of the largest fine ever imposed by the Philadelphia Board of Ethics for gift taking and failure to disclose contributions in excess of $175,000. He fought for the death penalty and prosecuted a man who’d been cleared of murder by DNA evidence. On February 10, Williams announced he would not seek a third term. Then on March 21, he was indicted on 23 counts of corruption and bribery-related charges. His alleged misbehavior, said an FBI special agent, was “brazen and wide-ranging, as is the idea that a district attorney would so cavalierly trade on elected office for financial gain.”

“I didn’t want to be a prosecutor,” Krasner says, because “Philly had a culture that was in love with the death penalty.”

Into the void have sprung seven candidates, all jockeying for the Democratic nomination ahead of the May primary and the right to square off with Republican candidate Beth Grossman. Philadelphia is a deep blue stronghold, so the winner of the primary will likely cruise in the general election. Krasner’s campaign might be best described as an insurgency, and one that has drawn the national spotlight.

Born in St. Louis, Krasner has made Philadelphia home since age nine. He comes from a household that relied on disability checks to make ends meet, and he’s a veteran of the city’s public school system. After attending the University of Chicago, he went on to law school at Stanford, where he “accumulated a skyscraper-sized pile of student loans.” Upon graduation, he forewent prosecutor jobs to become a public defender in Philadelphia, which he considers his hometown. “I didn’t want to be a prosecutor,” he says, because “Philly had a culture that was in love with the death penalty.”

In 1992, when then-President George H.W. Bush came to Philadelphia, ACT UP, the famous activist group striving to end the AIDS crisis, marched a coffin full of fake ashes through the city, protesting perceived inaction by the president. “The coffin tipped, the ashes flew; I think the cops thought they were going to get HIV,” Krasner recalls. “[The cops’] reaction was hyper violent—they cracked one person’s skull, made many of them bleed.” At that point, five years out of law school, he decided to dedicate himself to “representing people who were making the world a better place.”

In the years since, Krasner has filed more than 75 civil rights cases against police officers, and gotten 800 narcotics convictions thrown out after exposing two officers to have perjured themselves. Of the 420 protesters arrested at the 2012 Republican National Convention, Krasner won an acquittal rate of 99 percent over four years. Needless to say, these aren’t the usual credentials for someone running for a position sardonically referred to as “top cop.” When I ask him about that term, he bristles. As a district attorney, he says, “you’re supposed to seek justice in an evenhanded way—so if you know cops are dirty, you prosecute the cops.”

Against the backdrop of a new federal administration that wants to toughen rules on prosecuting crime, Krasner instead strongly believes that “mass incarceration hasn’t worked. It hasn’t made us safer; it hasn’t made us freer.” He wants to abolish the death penalty—Philly is the only city in the Northeast that still has it. He’s pledged to refuse to bring cases that have resulted from illegal stop-and-frisk actions. In Pennsylvania, which has more juveniles on life sentences without the possibility of parole than any other state in the country, Krasner has promised thorough resentencing. Rather than plastering uniform 35-year sentences on those juveniles, as the DA’s office has recommended, Krasner has vowed to revisit each case individually, considering things like childhood trauma in reducing sentences, because “this one-size-fits-all sentencing is appalling.”

Krasner also wants to end cash bail and reform civil forfeiture. Over half the people held in prisons in Philadelphia have not been convicted, but, unable to afford bail, have no choice but to await their trial behind bars. Krasner wants to implement alternatives for nonviolent offenders, like diverting addicts straight to treatment facilities, a practice known as “sweat bail.” When it comes to civil asset forfeiture, he says the city should not take anything unless there’s a conviction, and if assets are seized, they should go to the city’s general fund, not back to the DA’s office, as the program is currently structured.

The ideas seem to have resonated. Krasner has ripped up the playbook on incremental reforms, accelerating initiatives that looked politically impossible just a few years back. “Here’s what’s behind the sharp left turn in Philly’s DA race,” reads a recent article in Philly Mag profiling Krasner’s campaign. In fact, all seven Democratic candidates are now campaigning as reformers. National activist groups have hailed Philadelphia’s DA race as a historic one, a rebuke of the zero-tolerance approach championed by the current Oval Office.

“After decades of ‘wars’ on crime and drugs, public sentiment is now shifting toward a more expansive view of crime and justice,” says Marc Mauer, executive director of the Sentencing Project, a nonprofit that works on criminal justice reform. “Fortunately, a growing number of prosecutors view themselves as part of that movement.” Indeed, Krasner is not alone. 2016 saw reform candidates defeat hardline prosecutors in DA races in Florida, Louisiana, and Illinois. After a poor showing in the 2016 election cycle at the federal level, the Democratic Party has been refocusing its energy on local elections, and district attorneys’ offices have become an unlikely seat of progressive reform. Prosecutors are elected in all but four states, around 2,400 seats in total, a major political post that often runs uncontested.

George Soros invested $1.45 million in a super-PAC that backs Krasner.

Krasner is heartened to see criminal justice reform become so popular in his city’s race but remains skeptical of some of the rhetoric. Many of his competitors are former prosecutors, insiders, or assistant DAs. “The only other candidate who said he would unconditionally oppose the death penalty was supervising death penalties six months ago,” Krasner says, boasting that he’s been “walking the walk for 30 years.”

National groups are taking notice. Our Revolution, the progressive political action group associated with Bernie Sanders, endorsed Krasner. So, too, did Color of Change PAC, as well as major union groups Unite Here, PASNAP, and 1199C. He banked the endorsement of pop singer John Legend. And billionaire George Soros invested $1.45 million—a stunning amount for a local election—in a super-PAC called Philadelphia Justice and Public Safety that backs Krasner. That move brought extended scrutiny from his competitors, who have now started running negative attack ads aiming to identify Krasner as unsympathetic to victims.

Notably absent from that list of endorsements is the Fraternal Order of Police, Philadelphia’s police union, which was clashing with Krasner even before his campaign took off. When former Philadelphia Eagles running back LeSean McCoy was involved in a brawl with two off-duty Philly police officers, Krasner represented him, successfully getting all charges against him dropped. That led FOP President John McNesby to describe Krasner’s candidacy as “hilarious.” “He’s not laughing now,” chuckles Krasner. In March, the FOP endorsed Rich Negrin.

Still, Krasner believes that rank-and-file police will welcome his candidacy, if he can win. He points to his close relationships with multiple commissioners and the officers whose children he’s represented. He says he believes that the police will appreciate working with a DA who doesn’t spend his time courting a run for governor. The DA’s office in Philadelphia has often served as a launch pad for political careers at the state and national levels. But Krasner seems to view a stint as the district attorney as a culmination of his life’s work, rather than a stepping stone: “My chair after the DA’s chair,” he says, “will be a beach chair.”