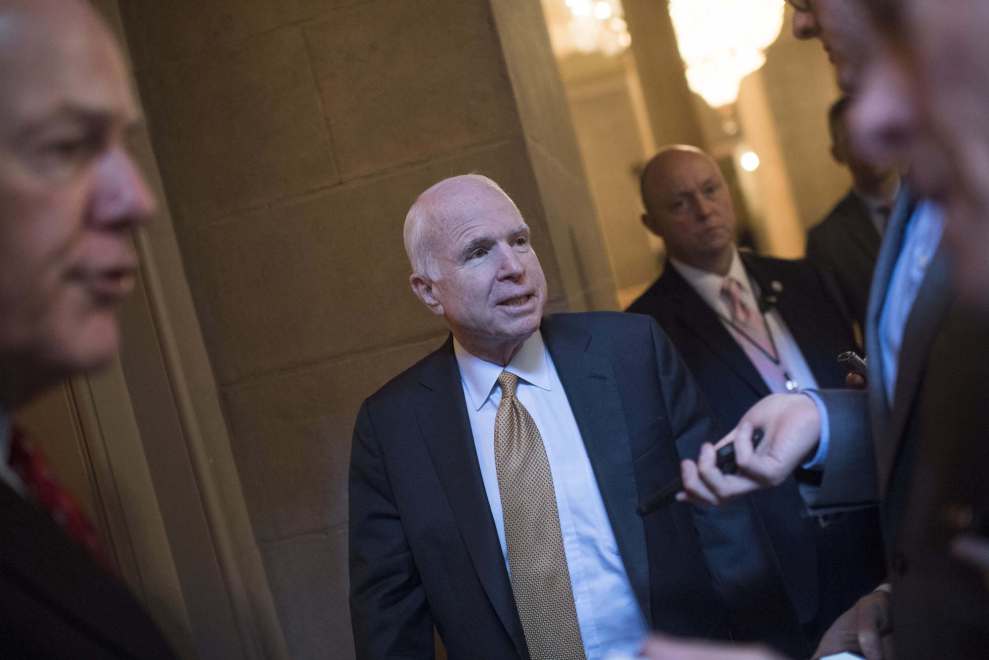 “I think we’ve seen this movie before,” the Arizona senator said at the International Republican Institute’s Freedom Awards on Tuesday. “I think it’s reaching a point where it’s of Watergate size and scale, and a couple of other scandals that you and I have seen. It’s a centipede that the shoe continues to drop.”

When asked by former Face the Nation host Bob Schieffer if he had any advice to offer Trump, McCain encouraged the president to “get it all out.”

“It’s not going to be over until every aspect of it is thoroughly examined and the American people have made a judgment,” he continued. “The longer you delay, the longer it’s going to last.”

McCain’s remarks on Tuesday echo similar concerns from Republican senators, who have grown increasingly exasperated from the near daily controversies to come from the White House. The scandals surrounding Trump reached a particularly chaotic point last week, after Trump’s sudden decision to fire Comey and the president’s own admission he asked the former director if he was under investigation. Trump’s tweets threatening the release of possible tape recordings between the two only exacerbated the widening scandal.

There’s video—John McCain: “I think it’s reaching a point where it’s of Watergate size and scale.” (via CBS) pic.twitter.com/kpfhUCUat8

But the Times bombshell has seemed to mark a turning point in the scandal. While McCain has always called for a thorough investigation into Russia’s meddling in the 2016 election and Trump’s possible ties to the Kremlin, other Republicans, who previously attempted to downplay or deflect the controversy, now seem to be signaling their unease. Shortly after the news broke, House Oversight Chairman Jason Chaffez (R-Utah) requested the FBI hand over any documents detailing communications between Trump and Comey.

On Wednesday, the Times‘ conservative columnist Ross Douthat penned an editorial recommending the 25th Amendment be used to remove Trump from office. Some Democrats, meanwhile, are calling for impeachment.

Today on the floor of the Congress of the United States of America, I will call for the Impeachment of the President between 9am & 10am CST.

SEN. ANGUS KING: “i say it with sadness and reluctance,” but if Trump urged Comey to end any investigations, impeachment is on the table.