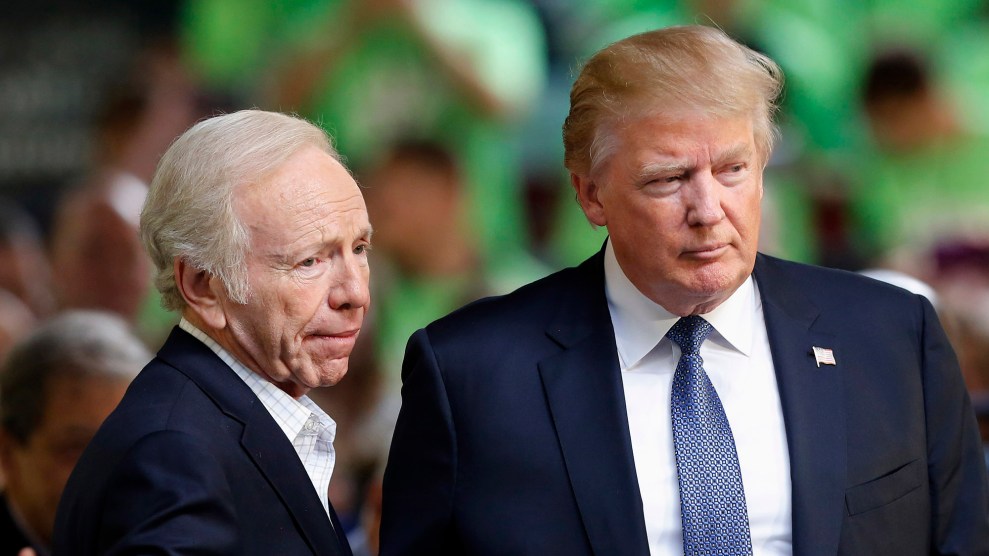 As President Donald Trump escaped Washington on Friday for his first overseas trip, the White House announced that he wasn’t yet ready to reveal his pick to replace James Comey, the FBI director he brazenly fired the previous week. But one name on his list appeared to be ahead of the others: former Sen. Joe Lieberman, the onetime Democrat who was Vice President Al Gore’s running mate in the 2000 presidential campaign.

Lieberman may not be an odd choice for Trump. He finished up his Senate career as an independent. Perhaps more important, since leaving the Senate in 2013, Lieberman has been a senior counsel at the Kasowitz Benson Torres law firm, which has defended Trump in numerous disputes over the years. But as a member of that law firm, Lieberman also had the unusual job of promoting and representing a Libyan businessman and politician who tried to court an alleged terrorist accused of leading the 2012 attack on the Benghazi compound that killed Ambassador Christopher Stevens and three other Americans.

In Lieberman’s final days as a senator, a reporter asked him if he would become a lobbyist. “No, I’m not going to do that,” he replied. But in November 2013, as Politico reported at the time, his law firm signed up as a foreign agent for Basit Igtet, a Libyan businessman and activist who was considering running for prime minister in Libya. Igtet made his money through assorted ventures in Switzerland, where his family had sought exile. He married Sara Bronfman, the daughter of Edgar Bronfman, who had been the billionaire chairman of Seagram and the president of the World Jewish Congress. The foreign agent registration form filed at the Justice Department noted that Lieberman would be part of the team handling this $100,000 project that would provide “government relations services” to Igtet.

A Benghazi native, Igtet was a long-shot candidate for prime minister. As Forbes noted, “Igtet believes he’s got the technocratic prowess to transform his country of six million people from the brink of civil war into the crown jewel of northern Africa. But skeptics say his status as a longtime expatriate and his lack of national security experience leave him ill-prepared to grasp control of deteriorating relations among warring rebel factions, police and the army.” And having a Jewish wife was probably not an asset.

As part of his campaign, Igtet emphasized his connections to the United States, pointing out his wife was involved with the US-Libya Chamber of Commerce and boasting that he personally knew Secretary of State John Kerry and Sen. John McCain. But Foreign Policy reported in early 2014 that as part of his campaign, he also sought out a terrorist suspect wanted by the United States for orchestrating the attack on the Benghazi facility:

Igtet not only has built ties with America’s friends, he’s also met with its enemies. He sat down last year with Ahmed Abu Khattala, the Benghazi militant charged by the Justice Department for his involvement in the 2012 attack on the American mission in Benghazi that killed US Ambassador J. Christopher Stevens. The State Department declared Abu Khattala a specially designated global terrorist in January.

Igtet says he told Abu Khattala that he is opposed to Libyans “being kidnapped or transferred somewhere else”—a reference to the U.S. policy of rendition, which Libyans saw firsthand last year when US commandos snatched al Qaeda suspect Abu Anas al-Libi off a Tripoli street and eventually brought him to New York to stand trial. Abu Khattala fears this could be his own fate.

“We are Libyans, this is our country and if someone has done something wrong here, they have to be judged in this country,” said Igtet. “Abu Khattala told me he is sure of his innocence. He said he has no problem to go to the court in Benghazi and face these issues there.”

Khattala never made it to a Benghazi court. In June 2014, he was captured by US special forces in a villa south of Benghazi, interrogated on a Navy ship for 13 days, and brought to the United States. US prosecutors have accused him of being a ringleader of the Benghazi assault. He has denied the charge. His trial is scheduled to begin in September.

Contacted by Mother Jones, Lieberman’s office said he was not available for comment.

When Khattala was nabbed, he was one of the FBI’s most-wanted terrorists, and bureau agents participated in the mission that grabbed him. Yet months earlier, Lieberman was working for a Libyan who had reached out to Khattala. Now, Lieberman may be Trump’s choice for FBI chief. If Lieberman does end up in the job, it will certainly be a first: an FBI director who once was a foreign agent for an overseas politician who cozied up to an alleged terrorist accused of killing Americans.

Will Republicans and conservatives care about this Benghazi connection?