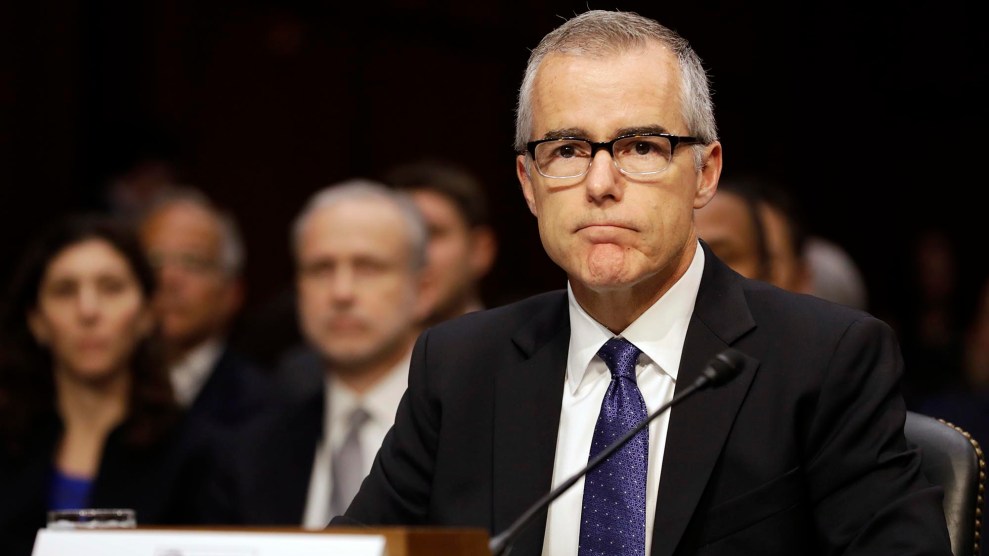 The White House has offered shifting justifications for President Donald Trump’s firing of FBI Director James Comey. White House officials initially insisted that the Department of Justice initiated the firing in response to Comey’s handling of the Hillary Clinton email investigation, a story that soon fell apart. Trump, in a brief statement, said that Comey “was not doing a good job”—without further explanation. The administration has denied the dismissal had anything to do with the FBI’s investigation of the Russian cyberattack on the 2016 campaign to help Trump, or with the bureau’s inquiry into interactions between Trump associates and Russians.

One key item the White House has cited as a reason Trump booted Comey was that Comey had lost the trust and confidence of the bureau’s own agents and employees. Yet on Thursday morning, Comey’s successor, Acting Director Andrew McCabe, gave testimony suggesting that on this point the White House was lying.

“That is not accurate. I can tell you also that Director Comey enjoyed broad support within the FBI and still does to this day.”

At Wednesday’s daily White House briefing, Sarah Huckabee Sanders, a Trump spokesperson, had the task of defending the firing of Comey. She said Trump had lost confidence in Comey over the past several months (despite all the positive statements he had made about Comey), and she claimed members of Congress had also soured on Comey. Then she added that, worst of all, the rank and file of the FBI had lost confidence in their director. Pressed by a reporter about that particular and stinging claim—the reporter cited an FBI source who had told him that “the vast majority of the bureau is in favor of Director Comey”—Sanders stuck to this line: “Look, we’ve heard from countless members of the FBI that say very different things.”

Was that true? Countless members of the FBI had turned on Comey? At a hearing held by the Senate Intelligence Committee the following day, Sen. Martin Heinrich (D-N.M.) asked McCabe whether Sanders’ assertion about the FBI rank and file’s attitude toward Comey was a fair and accurate assessment.

McCabe minced no words: “That is not accurate. I can tell you also that Director Comey enjoyed broad support within the FBI and still does to this day. We are a large organization. We are 36,500 people across this country, across this globe. We have a diversity of opinions about many things, but I can confidently tell you that the majority, the vast majority of FBI employees enjoyed a deep and positive connection to Director Comey.” McCabe added that it had been a great honor and privilege to work with Comey.

Acting FBI Director McCabe: “Director Comey enjoyed broad support within the FBI. And still does to this day.” pic.twitter.com/7OE5U5K4QW

So was the White House making stuff up to rationalize Trump’s dumping of Comey? McCabe didn’t go further. But there has been no reporting in the past few days to suggest this White House talking point is not a fabrication. The Washington Post on Wednesday quoted Thomas O’Connor, who heads the FBI Agents Association, as saying that Comey’s termination was “a gut punch. We didn’t see it coming, and we don’t think Director Comey did anything that would lead to this.”

McCabe’s testimony also suggested that Sanders had not told the truth in another regard. At her Wednesday briefing, Sanders said the FBI “is doing a whole lot more than the Russia investigation,” and that even though the media “would like to think that’s the FBI’s sole responsibility…that’s probably one of the smallest things that they’ve got going on their plate.”

Sen. Angus King (I-Maine) asked McCabe if the Russia probe is indeed one of the “smallest things” the FBI was handling. McCabe didn’t miss a beat: “Sir, we consider it to be a highly significant investigation.”

King wanted to drive home this point. “So you would not characterize it as one of the smallest things you’re engaged in?” he asked.

“I would not,” McCabe replied.