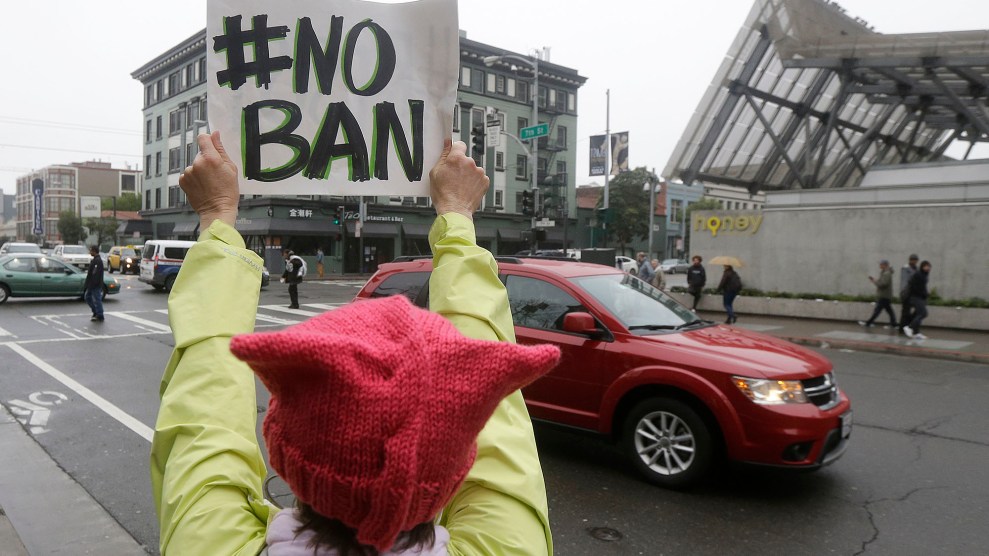 Donald Trump’s statements about banning Muslims during the presidential campaign are now at the heart of the court battle over his travel ban.

On Monday, the 4th Circuit Court of Appeals held oral arguments on the president’s executive order banning people from six Muslim-majority nations from entering the United States for 90 days. In reviewing the decision of a federal district judge in Maryland, who blocked the ban from going into effect, the judges of the 4th Circuit focused almost exclusively on the question of whether Trump’s campaign pledge to ban Muslims should be taken into consideration when weighing the constitutionality of the travel ban.

In December 2015, then-candidate Trump called for “total and complete shutdown of Muslims entering the United States until our country’s representatives can figure out what is going on.” Trump repeated and stuck by his policy throughout the campaign. His original statement remained on his campaign’s website until sometime Monday, when it disappeared around the time a reporter asked about its continued presence online during the daily White House press briefing.

After his election, Trump swiftly signed an executive order banning individuals from seven Muslim-majority countries entering the country for 90 days. Federal courts blocked the order, and the administration withdrew it and released a second, modified travel ban. This second order applied to six countries—Iraq was taken off the list—and included exceptions for permanent legal residents and current visa-holders. Still, a federal judge in Maryland blocked part of it and another federal judge in Hawaii placed a nationwide injunction on the whole order.

Opponents of the ban argue that Trump’s campaign statements are key to understanding the true purpose of the order. Arguing against the travel ban, American Civil Liberties Union attorney Omar Jadwat struggled when the judges pressed him to explain his opposition to the travel ban based just on the text—without taking Trump’s campaign statements into consideration. Some of the judges repeatedly queried Jadwat on whether the ban would still be constitutional if Trump’s comments were not part of the calculation. Jadwat said it would be because it violates the First Amendment by targeting people of a specific religion. In order to fulfill its stated purpose on national security, he argued, it would have applied to a different set of countries than those targeted by the order. “If this order were legitimate and actually doing what it said it was doing, it would do something different,” he said.

But without Trump’s campaign statements targeting Muslims, at least some of the judges did not appear to buy his argument. That’s why he continued to emphasize the thinking behind the travel ban. “The question is, what is the purpose of this policy?” Jadwat asked. He noted that when Trump signed the order, he read aloud its title referring to “foreign terrorist entry” and then added, “We all know what that means.” Jadwat further pointed to the fact that 2015 press release still on Trump’s campaign website—not realizing it had been taken down just hours earlier.

Perhaps the most compelling argument against the ban on Monday came not from the ACLU’s lawyer but from Sally Yates, the former acting attorney general whom Trump fired in January when she refused to have Justice Department lawyers defend the first travel ban in court. Questioned about that decision during a hearing on Capitol Hill on Monday, Yates explained why she believed the ban was unconstitutional—and why the president’s campaign remarks were a key ingredient in that calculation.

“I believed that any argument that we would have to make in its defense would not be grounded in the truth,” she explained, “because to make an argument in its defense we would have to argue that the executive order had nothing to do with religion, that it was not done with an intent to discriminate against Muslims.” But Yates could not ignore the role of religion, she explained, because of what Trump had said about Muslims. “Particularly where we were talking about a fundamental issue of religious freedom—not the interpretation of some arcane statute, but religious freedom—it was appropriate for us to look at the intent behind the president’s actions,” she said. “And the intent is laid out in his statements.”